Economics 26/12/2009: Commoners Amongst Our Foreigners

Merry Christmas to all and a Happy New Year.

To start off the post-Christmas season on an interesting note, here is a different look at the CSO's data on PPS allocations. 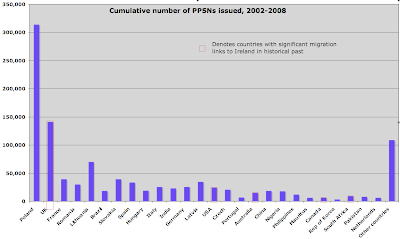 Cumulative PPS allocations over 2002-2008 show clearly the magnitude (absolute and relative) of migration from Poland to Ireland. It is worth highlighting the fact that the number of people moving to Ireland from the countries with strong historical links to this country is smaller than that from Poland, and close to that from the 3 Baltic States. Of course, the relative potential pool of migrants from the historically important destinations for Irish emigrants in the past is of magnitude of 100 times greater than that of the Baltic 3 entire populations. 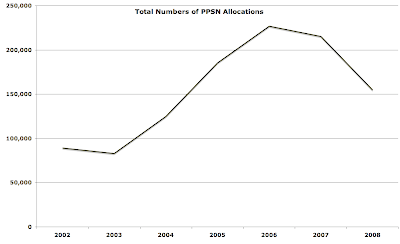 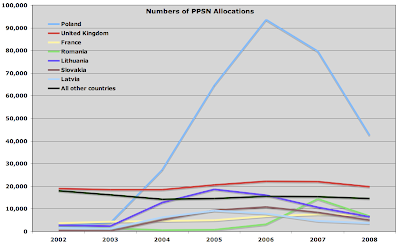 Looking at the same in terms of countries, the above graph shows again how dramatic was immigration from Poland relative to other countries. In 2005, tiny Lithuania sent more people into Ireland than any other country save for UK and Poland. However, as credit bubble blossomed back in the Baltics, Lithuanian and Latvian migration started to decline after 2005, as was the case with Slovakia post 2006. 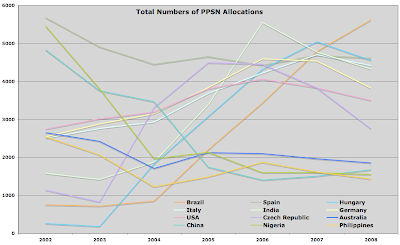 A messy chart above shows several interesting trends in migration from other countries. Nigeria - a clear decline post Michael McDowell-led reforms of the free-for-all asylum processes. Brazil - massive increase between 2004 and 2008. Whatever the reasons might be? Philippines - no dramatic slowdown in inflows, save for 2002-2004 period. In other words, given that the Philippines is the leading country supplying nursing staff to HSE, there is really no evidence here that Filipino nurses stopped coming to Ireland (remember the claims made by the trade unions). There are many other interesting things going on in the chart, so feel free to interpret/speculate. 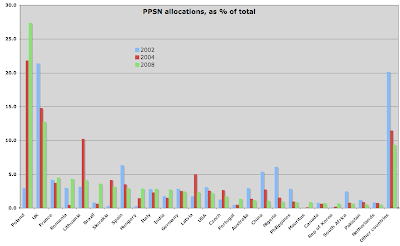 Some more trends in PPS allocations in 2002-2008 above. As percentage of the total, Poland's weight was still increasing in 2008, relative to all other major destinations sending immigrants to Ireland. 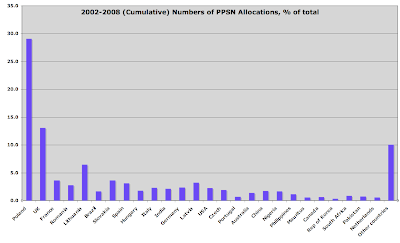 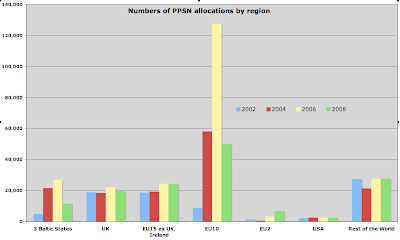 Here is a funny thing - 3 Baltic states accounted for more allocations in 2004-2006 than the UK, the rest of the EU15, the US and even the rest of the world. Amazing, given these three countries are about 1/100th of the EU27 population. And, given that incomes were raising in these countries at very high rates, why would these three countries attract such a massive migration to Ireland? Perhaps the reason is coincident with the anecdotal evidence that vast majority of migrants from these 3 states were Russian speaking. Of course, if this is true, it would represent a small embarrassment to these countries' leaderships, because it would illustrate dramatically how prosecution of Russian-speaking minorities in these countries was pushing people to emigrate. But, again, this is speculative at this point in time, as we never bothered to ask these people their ethnicity, as opposed to their citizenship.

Now, next, look at the dynamics of allocations of PPS numbers to foreign nationals: 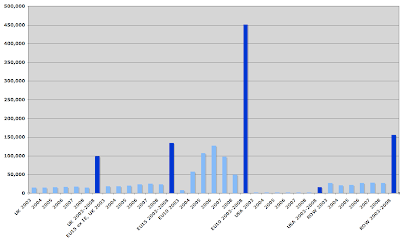 Note the dramatic dynamics for the EU10 - virtually none in 2003, jump in 2004 and on to peaking in 2006. what does it tell us about these workers? Prior to 2004, they had to compete with the rest of non-EU employees for jobs. And they were not very good at it, apparently. Post 2004, they no longer had to face real competition. And they became, overnight, very good at getting jobs. Suspicious? Me too. Just shows how arbitrary the world is out there - your skills, your aptitude, your knowledge - all these matter as a secondary differential at the very best. Your passport is what determines who you are, can be and will be to a greater extent. 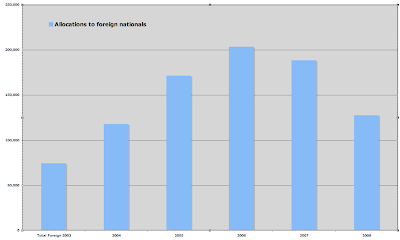 Total allocations to foreign nationals above. 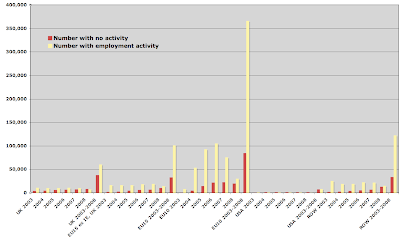 The above chart shows that overall, the groups with no employment activity were dominated not by the EU10 citizens, but by the UK, EU15, and US migrants. Why, you might ask? Well, citizens of these countries came to Ireland for many reasons, some of which were simply not available to those from EU10 - retirement would be one, second homes would be another one. In other words, it is not that the citizens of these countries had lower propensity to work in Ireland, they simply were more heterogeneous (age wise and occupation/income wise). 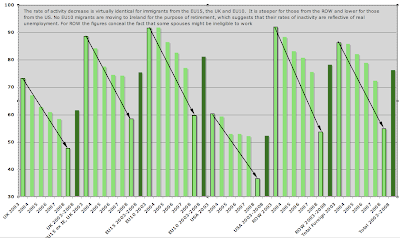 Chart above dispels several myths:
So despite a massively different levels of migration from the EU10 over 2004-2008, there is little evidence so far to suggest that these migrants were dramatically different from other groups of migrants. In some areas they were somewhat distinct, but one cannot conclude that these differences were dramatic...
Posted by TrueEconomics at 10:51 AM

Prior to 2004 there was a greater convergence among the EU15 economies than the accession 10 in terms of GDP per head,defecit levels as required by the growth and stability pact etc.

The currency in Ireland was euro which provided stability to repatriated savings.

The language in Ireland is English,the international language so whilst earning a living you perfect your fluency in this language.

Another pull factor is the extremely high social welfare rates here in Ireland and the fact that child benefit is still paid to children even though they may be resident in poland etc.

The availability of very cheap Ryanair fares from Poland etc to Ireland made even coming for a look around almost a painless affair.

So when the borders opened without restriction in 2004 Ireland was an extemely attractive proposition for citizens of the Accession10.

It is interesting to note that immigration from the original EU15 remained stable indicating the rate of required return for these people was higher than what was on offer in their own countries or there was a particular job skill available in Ireland to aid their professional development.

..I would contend that the open borders policy of 2004 onwards discounted the risk premium associated with immigration entirely ensuring the high numbers that came from Poland etc.

This also reflected in the fact that immigration is still very high from Poland etc in 2009 (despite a collapsing economy here).It should be borne in mind that the unemployment rate is considerably lower in Poland than in Ireland and this has been the case for over a year now.
Of course Irish people are not travelling the other direction to poland etc for the inverse of all the reasons outlined above.
This is an indictment of the failure of the goals of the EU in my opinion.

A perusal of the work permit statistics collated with the numbers granted refugee status compared to PPS numbers issued by Nationality clearly shows there are large discrepencies.

In some cases the differentials are of a frightening order.
For example compare the numbers of work permits issued to nigerians and brazilians against the numbers of PPS numbers issued and the difference is as high as 97% in the case of the nigerians.

In 2005 the government brought in a scheme ,the IBC/05 scheme to deal 'administratively' with the high numbers of illegal immigrants who had a child born in Ireland prior to the citizenship refererendum that you mention.
There was no Bill brought before the Dail or voted into law and no amnesty was granted.Yet these people became eligible to full social welfare rights immediately.(i.e. the Constitution states Money Bills must be voted by the Dail where expenditure of taxpayers money is concerned)

So in essence this scheme is an off balance sheet item like the special purposes vehicle of NAMA.

In the context of your piece it deserves special attention for the following reasons.
The only publicly stated information is that 16,300 applications were granted.Assuming there were two parents and three children the total granted permission to remain was 81,500.

In addition new children were subsequently born to these people and because under the law their children are now entitled to citizenship if their parents are resident in Ireland for three years.
So the total number of people in Ireland under this scheme could be around 100,000.
This is only a reasoned estimate and not based on any supplied public information because these people are here off balance sheet.
The costs to the State cannot be found and are buried in the general statistics.
Reading between the lines of social welfare figures that are available I estimate the cost to the taxpayer annually of this scheme to be 500 million euros.

Recently the minister for justice stated there were 30,000 extant work permits from the R.O.W.
It is truly bizarre that a scheme which has no legislative backing and is off balance sheet comprises a much higher number than immigrants from the R.O.W. who immigrated to Ireland legally.

Perhaps you can throw some more light on the above or is there more information available that you are aware of?