Chart below (courtesy of Economist, hat tip to Ronan Lyons) shows the sorry state of affairs in the 'knowledge' economy. Online advertising is an instrumental indicator for the extent of e-commerce in the country. Although rising this year (the only area of advertising holding up in this recession), our online advertising is lagging that of other countries. 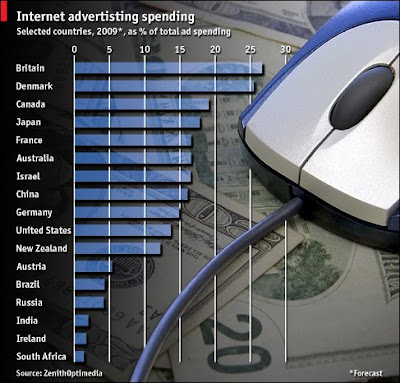 In fact, we are languishing at the bottom of the league table - next to South Africa and way off from the peer group of advanced economies. One can only speculate as to the causes of this underperformance, but here are the potentials:
Whether these are the real reasons or not, the signs are not good for Ireland's efforts to enter information age.


On finance side - the FR issued new data on mortgage arrears today (the details are here). You've heard the main headlines by now (note: the actual data was released once again in the same un-usable pdf format as the one employed by the DofF - another sign of information age illiteracy, one presumes). 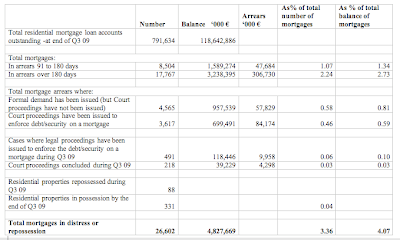 Table above summarises FR's data. Given that we have no time series to compare against, the only thing one can say is that the data above, as bad as it might appear, is lagged by some 6-12 months in the case of court proceedings and by around 1-2 months in the case of arrears. This suggests that as time elapses, the above numbers will rise substantially.

Other reasons to expect significant increases in distressed mortgages:
The only net positive in today's news is that after 29 months of financial crisis, FR finally decided to collect data on mortgages distress. Where were they over the last two years, one might inquire.


External trade data released today by CSO is showing that our (seasonally adjusted) exports were down 14% in October, relative to September 2009. back in September, exports rose by a robust 11% compared to August.

Imports fell by 7% in October 2009 relative to September and were down 1% in September
compared with August.


Computer equipment exports fell 25%, Electrical machinery by 28%, Industrial machinery by 33%. In contrast, medical and pharmaceutical products increased by 22%, Organic chemicals
by 11%, and Professional, scientific and controlling apparatus by 14%. The MNCs, in other words, were still firing on all cylinders in the pharma and pharma-related sectors, and medical devices.

Goods to Great Britain decreased by 15%, Germany by 21%, Northern Ireland by 22%, but goods to Belgium increased by 30% (a transit port for much of our trade with the rest of the world), the United States by 14% and Japan by 10%. So, apparently, there is little evidence of lasting adverse effects of the dollar devaluation on Irish exports then? Not so fast - remember that MNCs book transfer pricing through exporting to the US, and the strong Euro is just the added ingredient they need to cover the tracks. 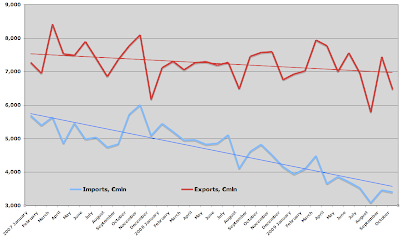 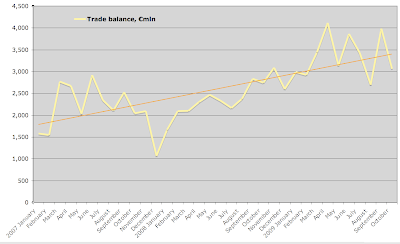 Of course, the trade balance is rising which is due to the facts that
I leave it to the readers to make a call if these are the signs of an economy in a recovery.
Posted by TrueEconomics at 5:41 PM

Wait until Dells exports fall out of the index fully from January. Dells figures will artifically depress Irelands exports in 2010.

We all know that Ireland is becoming a "smart economy" but what Ireland "REALLY" needs is a smart bank and here it is
http://www.lbhf.gov.uk/Images/smart%20bank3_tcm21-21322.JPG

I wouldn't read too much into the internet advertising data Constantin. It's a matter of advertising economics: massive (40-50%) falls in media rates (tv, press, radio) have made it even easier to reach Ireland's mass market. Moreover, we still prefer mainly Irish originated content (tv, press, radio again) and relatively small numbers of programmes (tv/radio) attract the lion's share of the available audiences.

Pat Kenny and co don't get paid those huge salaries just for turning up!

When it comes to the adoption of technologies there are two groups of people - as Kevin Kelly reminds us - 'the haves' and 'the have laters'. And Ireland is on or about the EU average for most ICT usage as it happens.

Constantin thanks for a great blog and for being a voice of sanity and reason in the midst of fools and charlatans. Have a great Christmas.