Last couple of weeks, there have been some pretty severe news flowing from the Irish economy and Irish banks. Is the current bear market in Irish banks shares a temporary adjustment / profit taking or is it a long overdue fundamentals-driven correction?

Here are few charts and my view of the story. 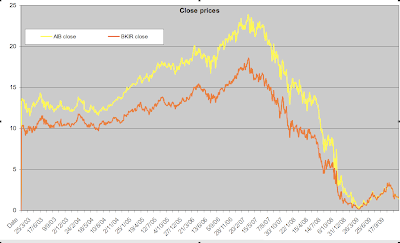 The general trend, per chart above, has been down since 2007 peaks, but also - convergence of the two banks to the same trading range. By 2009 beginning, the investors were no longer willing to significantly distinguish between BofI and AIB shares, preferring to treat them as a single sick puppy, rather than two different banks with different management styles, business models and investment exposures. 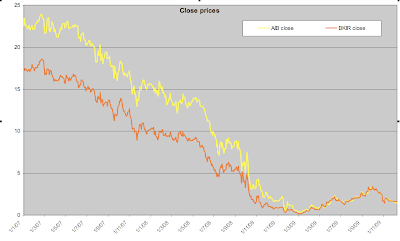 And guess what - they still do. The entire 2009 trading was still based on the story of Irish Banks, rather than individual stories of AIB and BofI. Now, over a short period of time, say during general market panic, this can be explained by a temporary loss of fundamentals clarity, implying that investors might see both banks as being the same. We are no longer in this period, as global markets willingness to take risks has improved significantly in H2 2009. But the same markets that are now willing to differentiate Goldman Sachs from Bank of America are still unwilling to differentiate AIB from BofI.

Another interesting feature of the data is that Nama effect (a positive push for shares of AIB and BofI) has now been fully exhausted. And this is pretty impressive - we approve €54bn in funds, nearly bankrupting the entire economy, and in return we get the markets sending banks' share price back to where they were in May 2009, prior to the Nama approval.

So in terms of absolute prices, neither Nama, nor the latest Budget, seem to be working. But what about the risks in actual trading positions on the banks? 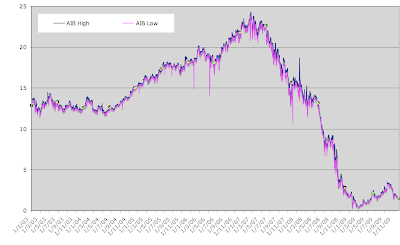 Well, if anything intraday volatility in AIB is down, not up, in the last 12 months. And that shows once again that the markets are not buying into AIB story. There is now less heterogeneity in investors' assessment of AIB value proposition than before: 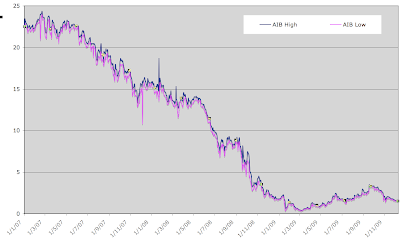 The same is true for BofI: 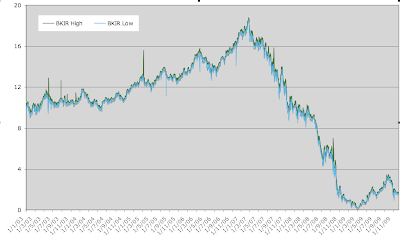 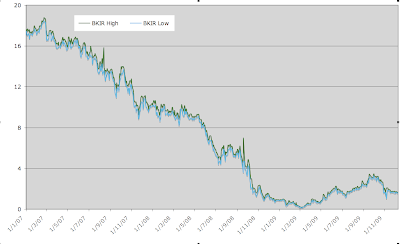 The same story for a broader IFIN index 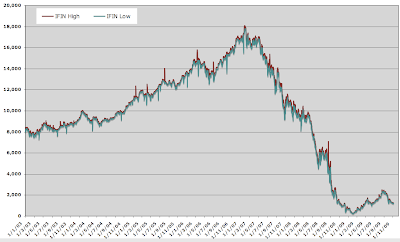 And there is nothing out of the ordinary in terms of volumes either: 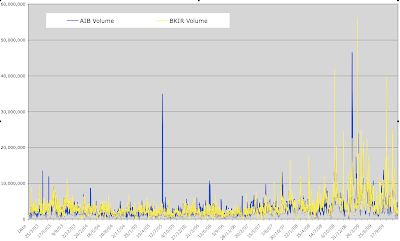 But now look as spreads (high-low) and monthly volatility: calmer, much calmer seas than over 2008. Again, no panic - just calm and measured trading here. 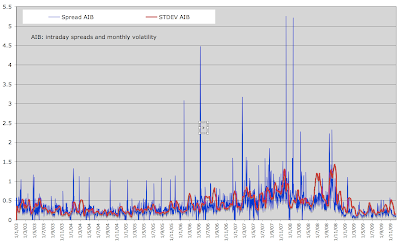 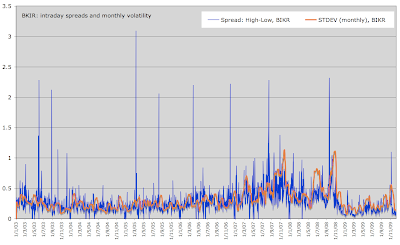 One can't really say here that investors are treating Irish banks shares in some idiosyncratic way, with an abnormally high sensitivity to risk. There is actually much less sensitivity to risk in the markets today than in 2008 and even 2007. So the current bear trend in Irish banks shares is driven by the markets assessment of fundamentals. In other words, markets are doing the job - spotting the 'dog' and pricing it down... 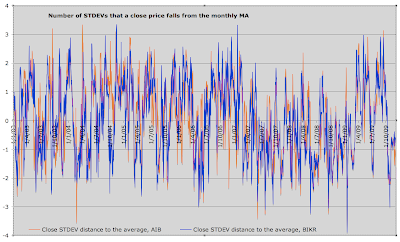 Any doubt? The above chart confirms that there is no abnormally heightened sensitivity to risk when it comes to AIB and BofI shares. The only outline events of 2009 in these shares relate to the bear rally that has just ended. The downtrend, therefore, is the norm.
Posted by TrueEconomics at 11:49 AM

The majority of AIB and BOI shares are in the hands of Irish and American retail investors.

Institutional investors have given Irish "GOMBEEN" banks the two fingers. Why would they want to hold bank stock that pay no dividends???
They have being misled on the NAMA discounts
(i.e RTE reported 20% discount) now their being told 30%.

Irish bank shares have become a giant ponzi scheme for department of finance mandarins with "INSIDE INFORMATION" and "friends of Fianna Fail". I mean how does Bank of Ireland go from 12 cent in March to 3.51 in September. In my opinion,
Politics is a critical factor to consider if you are buying Irish bank shares.

If i'm right you said to Rita O'Reilly on Prime Time
that AIB and BOI will be nationalised in 2010 following automatic need for bank recapitalisation.
Have you backtracked on this view or are you still saying doom is in store for messers Sheehy and Boucher.

Hi Patrick, you are right - I foresee a very strong chance the Exchequer will hold the majority shares (ca 90%) in the two banks by the end of 2010. This is driven by my estimates of demand for capital from the two institutions. As the uncertainty surrounding the discount rates under Nama remains, any increase in the discount will automatically increase the probability of a de facto nationalization.