Department of Finance has published (unnoticed by most) its estimates of the replacement rates for Irish Social Welfare system. Per DofF, any replacement rate in excess of 70% is problematic, as it creates significant disincentive for the recipients to seek reentry into the labour force. Well, yes. I agree.

However, what DofF fails to recognize in its estimates is the fact that welfare recipients avail themselves of free healthcare (medical cards) and subsidized drugs scheme, plus, having no jobs to attend to, they do not have to spend a penny on childcare.

Effective wage in my estimates refers to the earnings that must be attained in the workplace in order to supply the same level of real income as provided by social welfare. My estimate is based on DofF replacement rate estimates, plus additional benefits as outlined in the footnote. 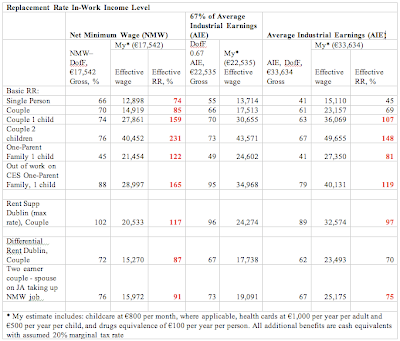 Telling picture. For a country with average income of ca €25,000 per capita, we are talking about virtually all groups of welfare recipients, case-studied by DofF, getting more on welfare than in average employment.

Red-bold cases are clear welfare traps with replacement income in excess of 70% relative to reference group.
Posted by TrueEconomics at 2:08 PM

Interesting, not to say, scary. By children do you mean pre-school? Clearly the amount of child care required depends on their age.

I think that you may over estimate the value of the medical card, and the savings on childcare. Not everybody pays 800 pm for it. However you dont seem to have factored in rent allowance, or the differential rent scheme.

According to AN Bord Snip report a couple with two children are entitled to over 37,000 euros tax free,excluding medical card.
The average industrial wage is just over 33,000 euros.After tax this probably drops to about 31,000 euros.
One other point to add to your analysis of unaccounted costs in working is travel .
Generally it takes an hour for most people to get to work.Thats two unpaid hours a day gone plus the financial costs of travelling.

It has been flagged that the public service will be cut between 5 and 6 per cent at the lower salary range and jobseekers allowance will be cut by 4%.

Also I think more people on low PS salaries will become entitled to supplementary sw benefits following a reduction in pay.I wonder has this been factored into the budget.

Gerard, agree with your point on childcare - my analysis tends to be Dublin-centric. My own son is in childcare at the cost of ca Euro1,100 per month, but I would agree that there are probably childcare alternatives at closer to half of that, especially if we consider older children. This, however, evens out through what Anonymous refers to as cost of travel/commuting to work, as well as differential costs of meals at work (much more expensive than home food) etc. Many other aspects have to be factored in, both ways - increasing and decreasing the true cost of living on welfare relative to living with jobs. I would say most net out, given my assumptions.

On your point concerning rent allowances - these are already in the DofF analysis, as far as I understand.

And, Anonymous - you make an excellent observation on supplement welfare benefits for 'low' paid PS workers post-Budget. No, this is not in either DofF or my estimates, as both reflect pre-Budget 2010 measures only.

I would be certainly open to any suggestions as to how these can be factored in once the Budget is published.

One further point I forgot to make in my post above re people on low PS salaries who will become entitled to supplementary sw benefits following a reduction in pay.

Many Public Servants will fall below the threshold income for the higher levy rates which were brought in earlier this year following a reduction of projected 4 to 6 % wage cut in tomorrows budget.
For example the threshold salary for one higher band is 30K.The total difference in the levy rates between bands above and below 30 K is approx. 1200 euros.
If someone is on 31K this will result in a salary reduction of 1240 euros for a 4% wage cut.
This would bring the persons salary below the threshold of 30K thereby saving them 1200 euros.
Therefore the effective pay cut will be just 40 euros or approx. 0.1% in real terms.
This I think will be an unintended consequence of a levy being a pay cut and not being a pay cut (Alice in wonderland stuff).