A quick post - per Sunday Times report today, Irish Nationwide will need 1.2-2 billion in recapitalization post-Nama. This beats my estimate for the society provided here. To remind you - back in October 2009 I estimated that post-Name demand for capital will be:
Since then it was confirmed by various reports and estimates that:
To err on conservative side, I am still sticking to the range of €9.7-12.4bn for total demand.


On retail sales side: October figures released last week show continued weakness across consumer spending - despite some bounce up in car sales (+1.4 mom). Total sales fell 0.3% mom and ex-motors sales declined 1.7% erasing all gains made in September. Core sales 9e-motors) are now at 2005 levels down 13% from the November 2007 peak. Despite seasonal shopping going into Christmas, 'other goods' sales (including toys, jewelry, sports wear etc) posted a drop of 4%. Furniture and lighting posted a fall of 3.2% and would have probably fallen even further if not for Ikea. This, of course implies that a rational forecast for 2010 should be in the region of 3% fall in retail sales, compounding the 7% drop in 2009 and leaving retail sales at some 84% on 2007 peak. More urgently, staying on the established trend, December retail sales are risking to sink 10-15% on 2008, which might trigger a new wave of layoffs in January-February 2010.

Services Exports data also released last week shows that our services trade deficit has widened in 2008 relative to 2007 by 370% as imports rose much faster than exports. 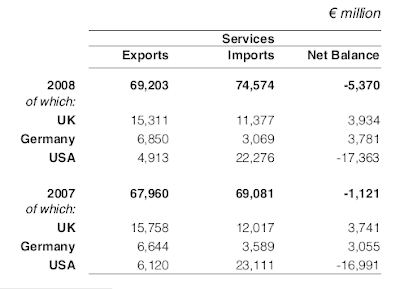 The detailed data clearly shows that we lack geographic diversification of exports in most services, with 76% of our services exports (allocated to specific geographic destinations) destined for Europe. And we are failing to benefit from substantial cost savings from outsourcing services to Asia - with just 2.4% of our services imports coming from Asia (Asia accounted for 7.9% of our exports of services).

In higher value added services:
Once again, poor diversification to new markets suggests that Irish services exports might be in danger of heading for a slow growth path tied to the fortunes of stagnation-bound EU. Diversification out of this predicament will require serious efforts on behalf of the Government to provide meaningful exports credit insurance and some sort of the foreign exchange risk offset mechanism. Otherwise, Ireland is at a risk of becoming the back water to Europe's slow growth model.
Posted by TrueEconomics at 8:29 PM

I export services to Asia (IT). I do so through a Dutch company which is itself a subsidiary of an Irish company.

I know of others with similar arrangements (i.e. they are part of an EMEA operation that is headquartered in another european country, so in first-hop terms, they are exporting to there).

As such, my Asian exports look like they are European exports, I believe. Could this be some explanation for the apparent lack of diversification?