Last week, IMF updated its World Economic Outlook with a fresh upgrade to global growth forecast for 2015. Lot's of media miles have been travelled over this upgrade (here's one example). And, in fairness, the IMF might be right: there has been some firming up in global growth in recent months.

More significantly, the firming up is coming on foot of stronger performance of the advanced economies, where the cycle is now clearly indicating early stages recovery.

The same positive momentum has been confirmed in a number of expert surveys, e.g. BlackRock Investment Institute and McKinsey Global Institute and so on.

Still, just to be on the safer side, it is worth taking IMF forecasts in perspective. The Fund has been systematically wrong in its outlooks for Global and Advanced economies growth in recent years. Here is some evidence.

First: take the same period estimates (April-published estimates for the same year growth). These should be pretty easy to predict, as by the date of their release, the Fund has contemporaneous data flows on the economies (e.g. PMIs) and previous year dynamics pretty much sorted. Table below shows that, despite some data already being available, the Fund has rather varied experience with its estimates. And when it comes to the World Economy estimates, things have goo ten worse over the last three years, compared to the 5 years range.

Second, let's look at one year-ahead forecasts. Here, things are better in most recent three years, but they are not brilliant, especially when it comes to the Fund forecasts for the Euro Area. 3-5 year average over-estimate of growth is to the tune of 0.76-1.05% per annum. When it comes to World growth forecasts, these too turn out to be too optimistic, in the range of 0.56-0.60% annually.

Third: over two years forecasts, Fund's performance is worse: for the World economy forecasts tend to be on average more optimistic than the outrun by between 0.68% and 1.04% per annum. The same range for Euro Area is 1.19% to 1.53%.

Two charts illustrate the above. First: One-year ahead forecasts compared to outrun: 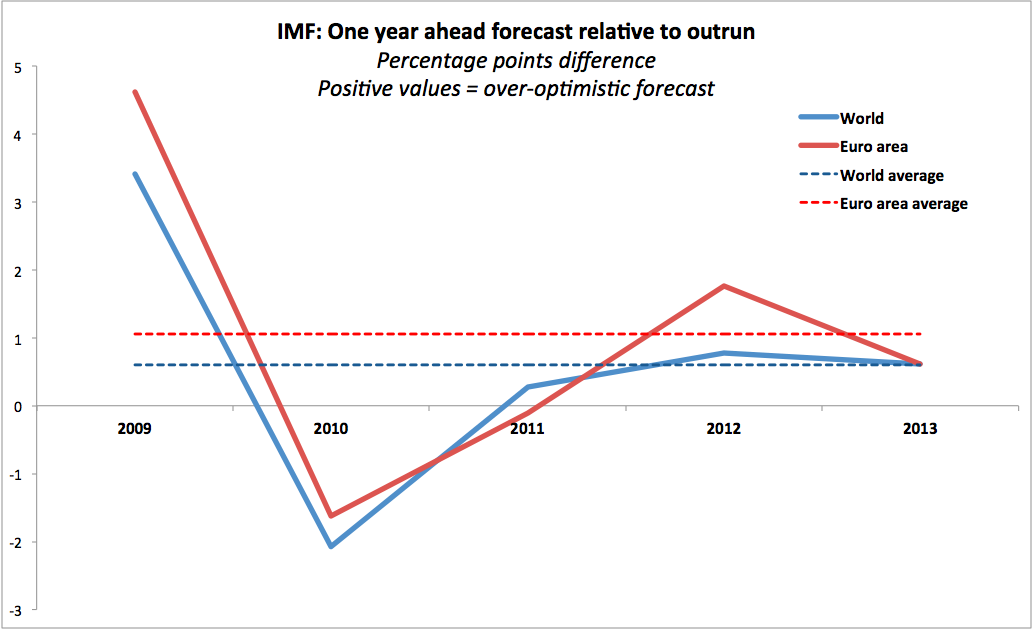 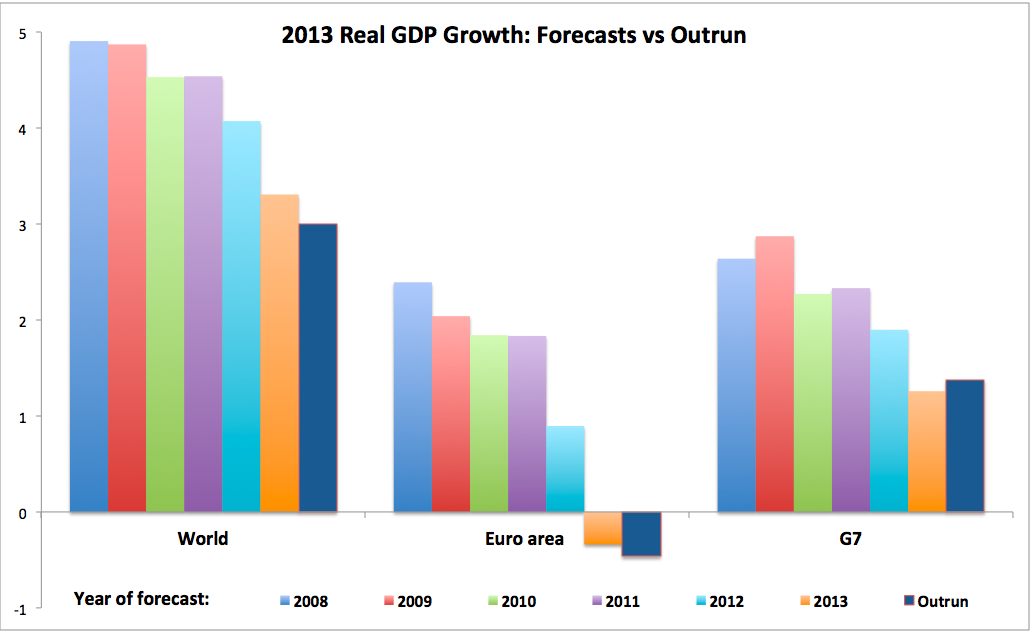 Someone criticised my choice of the period covered, but the entire point of my argument here is not that the IMF is bad at forecasting (it is no worse than many other sources), but that forecasts at the times we live in are by their nature highly restrictive. That is, of course, not the notion one gets from reading business media reports of every IMF (or other major source) forecasts update.

So the net conclusion must be that there are indicators of global growth firming up… but I would't be rushing to buy on foot of IMF statements about 2015… At least not until there is a clear and established trend along which the forecasters can glide smoothly. When we need forecasts most, they are least useful… such is reality.

Posted by TrueEconomics at 4:28 PM