Whenever Irish Government and media talk about the fabled hordes of investors wondering around Ireland looking for anything to put their money into, all this talk makes me wonder: why are the actual numbers coming out of capital formation side of the National Accounts showing only weak, leafless 'improvements'? Even with reclassifications of R&D costs as 'investment', and with the FDI (some of which does count as 'domestic') and retained profits (some of which, if reinvested, also count as 'domestic').

Well, I bet the IMF should be wondering too. Because in its latest Euro Area analytical paper, the Fund shows that Irish Gross Fixed Capital Formation in Q1 2014 was the second lowest (relative to 2007 levels) after that of another 'recovering' miracle: Greece. 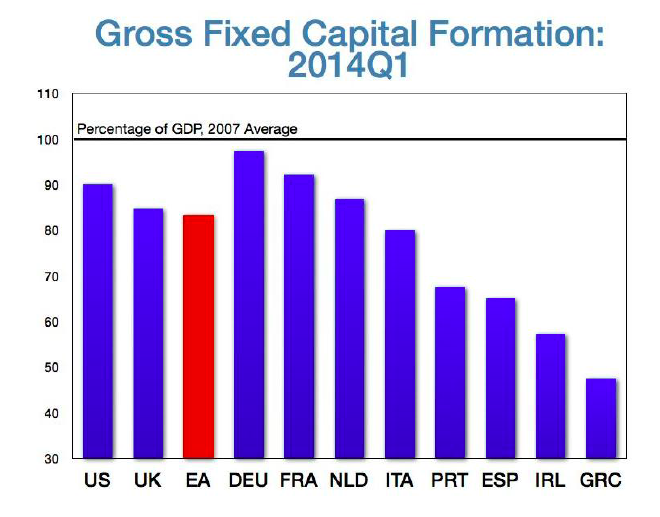 Meanwhile, Ireland is benefiting from low interest rates (compared to its 'peripheral' counterparts) despite having the largest net debt pile of all euro area economies (although Irish rates are rising): 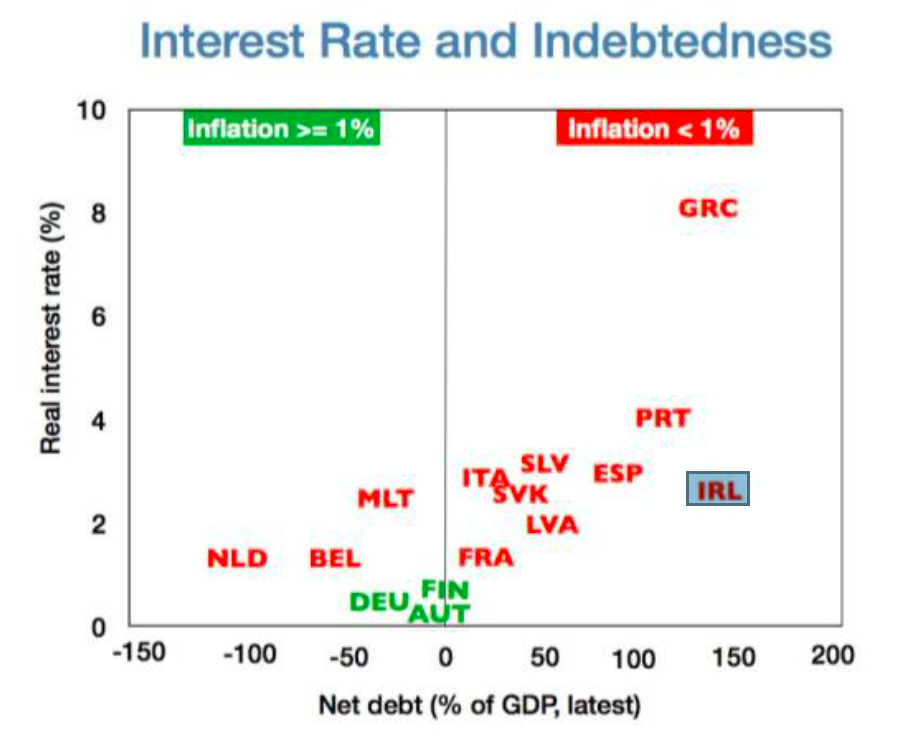 Run by me again that point where, in theory, higher risks are priced via higher cost of capital? 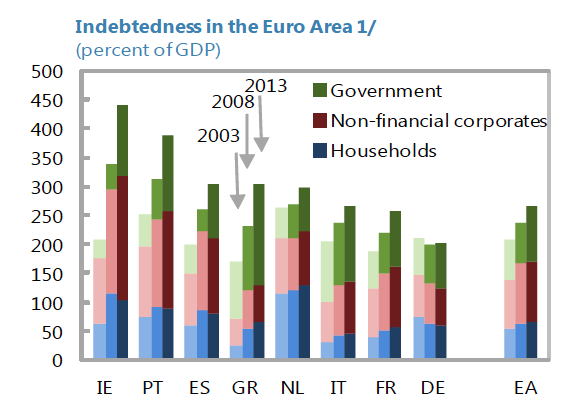 Or that point where equity valuations should be reflective of debt exposures? 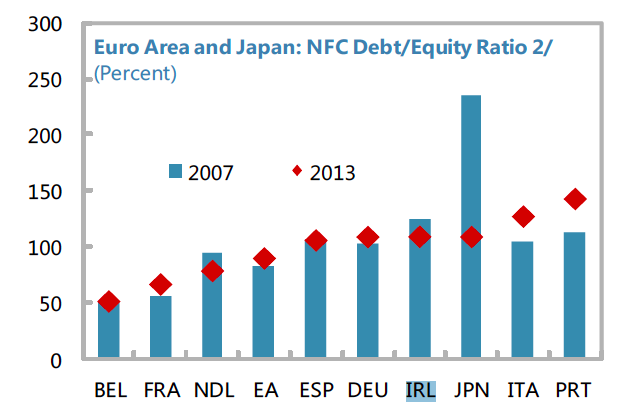 Market prices are clearly not providing the useful information that theory says they should. The big question is - why? Is theory wrong? or are the markets rigged?

With the currencies jumping up and down like penny stocks each time a central banker opens the mouth (or printing press) while pretending that the (massaged) CPI is under control while in the best manner of communist central planners the cost of capital is manipulted to target the growth of another (massaged) indicator GDP, the question 'are markets rigged' is a rethorical one.

So, how does this and many of the other portents of doom share the same bed as your analysis about house prices? Surely it isn't different where house prices are concerned? Apparently a fixation on corrective house pricing is in the personal interest and excluded from the logic of 1975 levels of mortgage lending. A pity the blog is superior to most analysis on many other topics

I don;t quite understand the point you are trying to make, Richard? House prices are rising, bond prices are rising, but drivers are not identical by any possible means and neither are the players in both markets. Debt is rising on corporates side (not households - here debt is falling, but not fast enough). So I do not see how a bubble in equity & bonds valuations implies or relates to corrective rise in property prices.

Now, I have no idea what any of the 'portents of gloom' have to say on this or other topics - I do not read Irish media analysts. I deal with Irish data and international analysis. Occasionally people highlight to me interesting articles in Irish media and these I do read and sometimes comment on, but in general, I have no idea what ANY of Irish columnists have to say.

Personal interest? I do not advise individual retail investors and do not deal in property. Per clients I do work with - their interest is 99.9% outside Ireland and 0.1% in Ireland (including equities, bonds, private equity and everything else, but certainly not residential resale markets).

1975 levels of mortgage lending? I cover that in other posts. We are clearly not in a market driven by mortgages lending.

So am I missing something?

Hi Constantin, my point is this, I read you r blog regularly, I understand that the world sits in a matrix like moment where the laws of free markets are suspended by the Draghi 'put'. Irish private and public debt is a world beater, GDP does not represent the domestic capacity to repay this debt so the % is higher, 100,000 mortgages are in trouble and many should have been repossessed 1-3 years into default, 50% of SME debt is in distress, emigration has stemmed population growth to 10k in 2012, a yawning deficit that must be closed. Yes people are moving to Dublin, but that happened in the 80's too. Inflation is dead yet some mythical force that does not require growth, credit, population growth or common senses is pushing Dublin house prices back to some mean - I don't get it - to me it suits the banks to have house prices jump if only for a while, sting a few more ejits out of their money. House prices are not an economic island

I understand your point now, Richard. In my view, the difference is between longer term growth rates in house prices and current (to-date) rises. To-date rises are catching up, based on limited cash and credit resources. Unless we deal with myriad of the problems you have outlined, this price rise is not going to translate into sustained continued price increases in the longer-term future. But that does not mean that current levels of prices (as opposed to growth rates) are not going to stick. A bubble is a situation where current levels of prices are not sustainable. I don't think we are there yet, but if (as you note) majority of the above problems are not resolved, then increases in prices at current rates, assuming they continue, will result at certain point in time in a bubble. I don't have crystal ball to time that, however. Hence, my references to recent price increases not being a bubble are exactly what they are, references about the current rises, not about continuation of such into the future.

I hope this explains.