There is an interesting and mildly entertaining article in the Sindo (http://www.independent.ie/business/irish/patrick-honohan-stay-the-course-its-paying-off-30460638.html#sthash.fHeQGdJO.dpuf), penned by the Governor of the Central Bank, Professor Honohan.

Now, before I make few comments on the article, a disclosure: I like reforms and changes Professor Honohan brought to the Central Bank. And I think Professor Honohan has done an excellent job in the past to subtly highlight major bottlenecks in the Irish economic policies.

With that in mind, here are few quotes and some of my comments:

"Managing domestic demand, ensuring the banks are healthy, and offering advice to Government: these are the tasks of the Central Bank, and our measured approach to all three over the past few years has, I believe, borne fruit. Recovery remains slow and partial," said Professor Honohan.

So where are we on these tasks?

Per Professor Honohan, on the banks health: "...it is still not possible to describe them as being fully restored to health and delivering the services needed by the economy." In other words, ensuring the banks are healthy is still unfinished business. Central Bank either walks away from the test on this, or gets a poor grade - you choose.

On domestic demand: "…the total number at work and average living standards are both still well below the peak reached at the top of the bubble. And the elevated debt levels remain a lasting legacy." Now, wait, this also doesn't look like the Central Bank's finer moment, is it?

That was just Professor Honohan's own admissions. Now, here's a chart plotting evolution of domestic demand, 'managed' by the Central Bank: 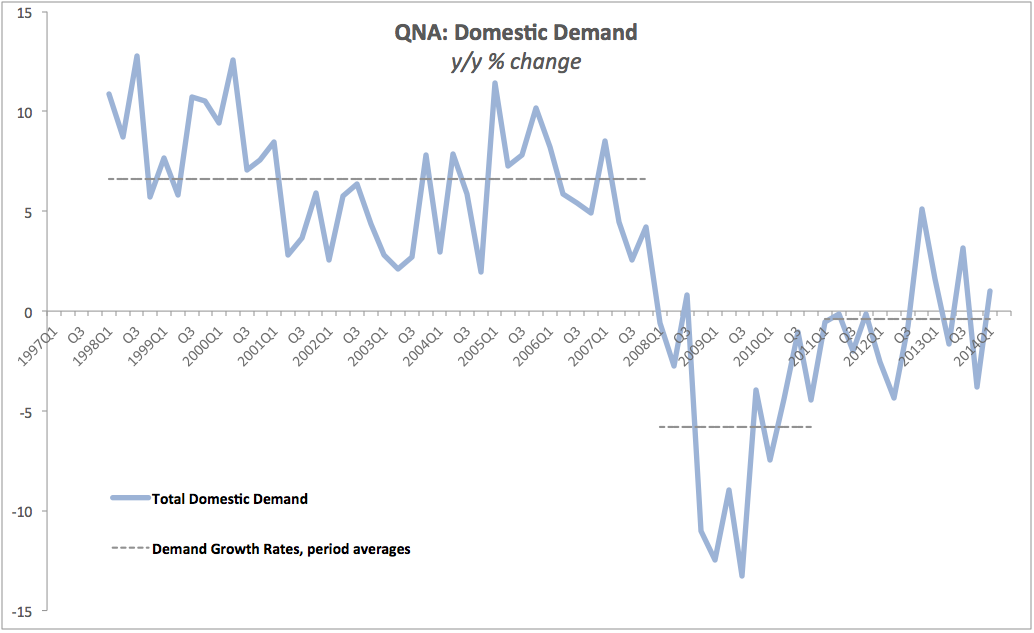 You wouldn't be calling this 'managing' unless your management job is in demolition business...

Professor Honohan credits the ECB for providing 'some insulation' to mortgagees "who can currently just afford to pay" in the form of "exceptionally low interest rates". But there is a problem with this from the Central Bank's point of view. ECB rates did drop. Significantly. From 3.1% pre-crisis average to 0.15% today - a swing down of 2.95 percentage points. Yet, with all the trackers in, current retail interest rates for outstanding loans have declined (compared to pre-crisis average) by only 0.86 percentage points for mortgages with original maturity between 1 and 5 years, and by only 1.14 percentage points for mortgages with maturity over 5 years. Short term consumer loans rates and overdrafts rates have actually risen. Things are even worse if we are to measure the average rates to peak property lending around 2006, omitting 2007. So 'insulation' might have been provided by the ECB, but as far as Irish Central Bank actions go, these have ensured that the banks can extract more blood out of the economy, not that the banking system supports households in trouble.

There is a bigger problem for Professor Honohan here: if these borrowers 'can currently just afford to pay', what happens to their ability to pay when rates do rise? Or is Central Bank's 'managing banks and domestic demand health' not including looking into the near-term future?

Finally, on something from the Central Bank's own frontline: the mortgages arrears. "At the same time, far too many cases persist where no adequate cooperation between bank and borrower has been achieved. It is mainly for these cases that the banks have gone down the legal path towards repossession. ...I would urge borrowers who have not been cooperating to recognise that that is a hazardous course of action: bear in mind that banks can get court approval for repossession if borrowers are not cooperating."

Professor Honohan is correct - there are many cases in which borrowers in arrears fail to cooperate with the banks. But Professor Honohan neatly omits thousands of cases where certain banks - two of which are Irish Government-rescued and form the 'Pillars' of the 'new banking system' here - are not cooperating with the borrowers. Presumably, criticising the borrowers is Central Bank's job, but criticising the lenders is not…

To sum up, the Central Bank has done quite a bit of a good heavy-lifting job on all fronts. But this is hardly the right time to start talking up its achievements to-date. As Governor Honohan points out himself: "our measured approach to all [policies areas] over the past few years has, I believe, borne fruit." That fruit is: "Recovery remains slow and partial". Not exactly commemorative medals time, yet, eh?..

Posted by TrueEconomics at 10:42 AM

Totally agree with you. Variable rate mortgage interest rates have , in fact , INCREASED , so there has been NO benenfit to Mortgage Holders of lower ECB interest rates - these low rates are 100% for the benefit of the Banks and is a covert way or "recapitalising" them.My Bank statement shows my Bank charging almost 12% per annum so if they are "buying" money at 0.25% that is a 48 Times "Mark Up" ????. These margins are "Super - Normal" profits and are a deliberate ploy to build up the Banks capital base again at the expense of Customers and the Economy. The Commercial Banks have been virtually given "Carte Blanche" now to treat ( abuse) Customers without fear of regulation - there is no entity left , other than David Hall's outfit and a few others to expose the Banks blatant unreasonableness - I could not get over how , in one well publicised case , a Lady who owed money to a Bank was prevented from selling Her property for €500k by the Bank only to find the Bank selling it later for €200k and holding HER liable for the Total shortfall. This is morally wrong and further encourages bad banking practice - if the Banks were truly responsible for their lendings on Housing , as in the USA , then they would have to just take the value realised from the sale of the House and that's all ! The Irish Central Bank is , in effect , the Irish Branch of the ECB , and has little to crow about yet !