Global Innovation Index is out this week and the 2014 edition focus is on Human Capital (here) a topic close to my heart (see my TEDx talk on this here).

Here are some interesting comparatives taken over the Index history for Ireland and its core peers. 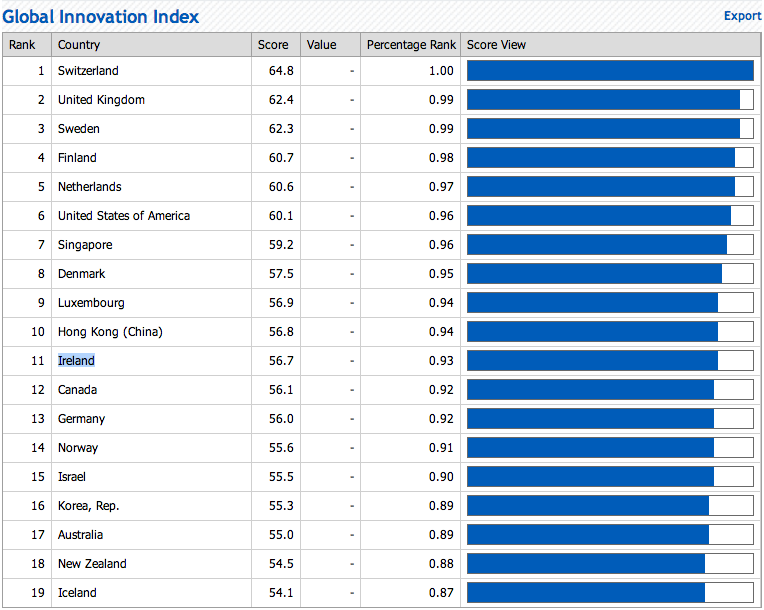 Here is evolution of Irish rankings over time, compared to other small open economies of Europe that rank in top 25 this year: 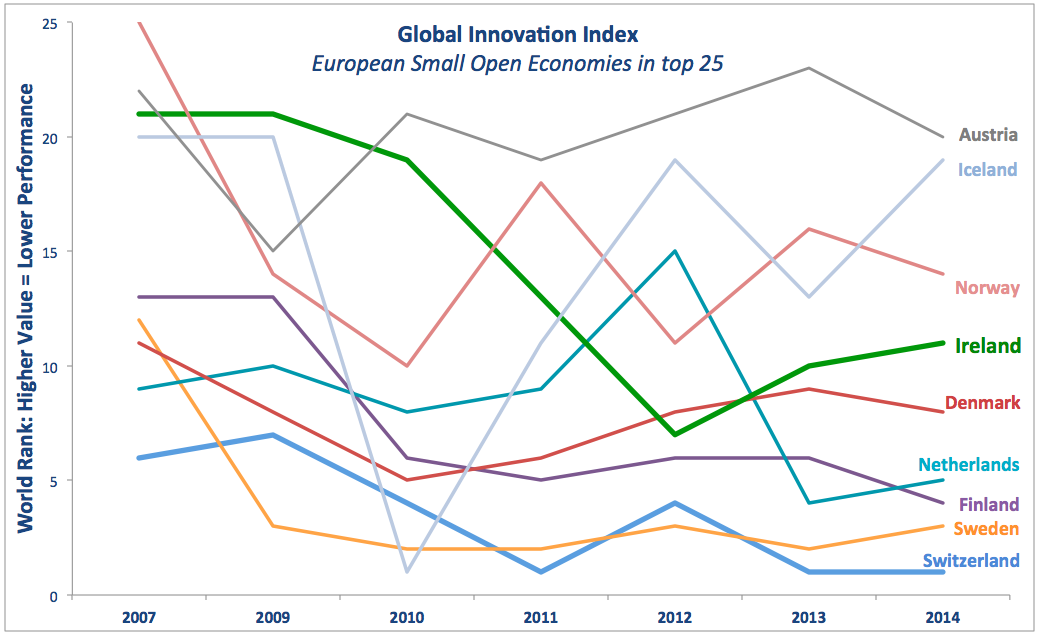 Not a bad performance for Ireland, I must say, though we should be aiming for a place in the top-10.

However, over longer time horizon our performance is second best in the group of peer economies: 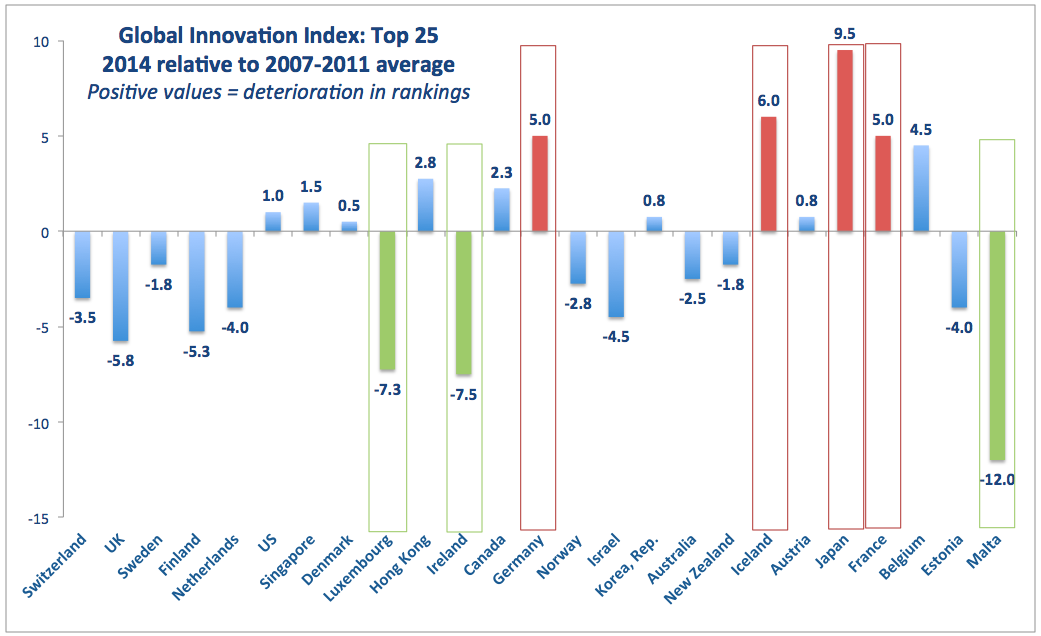 It is worth noting that Luxembourg is, in my view, an economy that simply should not be ranked due to massive distortions in its rankings induced by large share of the companies operating in the country only as post-box offices and due to huge proportion of its workforce not being residents of the country. In Ireland, there are some distortions as well, and these are very significant, but of magnitude they are much smaller than those in Luxembourg.

Here are some Ireland vs Switzerland comparatives in specific sub-indices:

The above shows relatively strong performance for Ireland, except for: 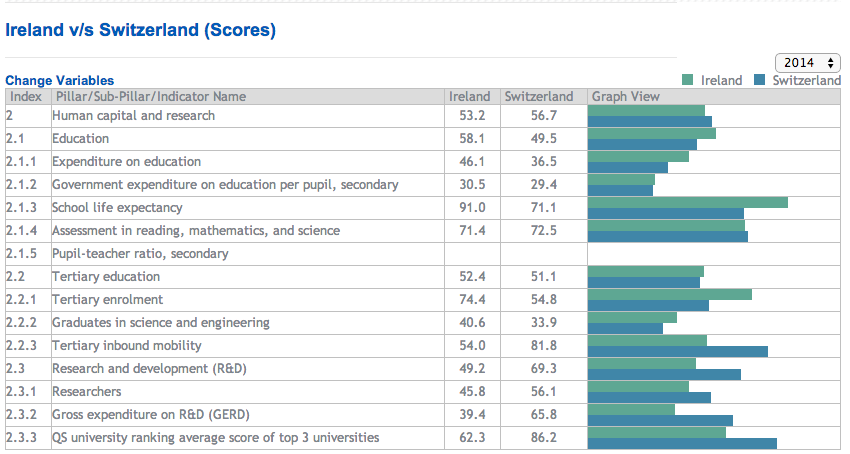 Overall, we have a strong lead compared to Switzerland in:


We significantly lag Switzerland in: 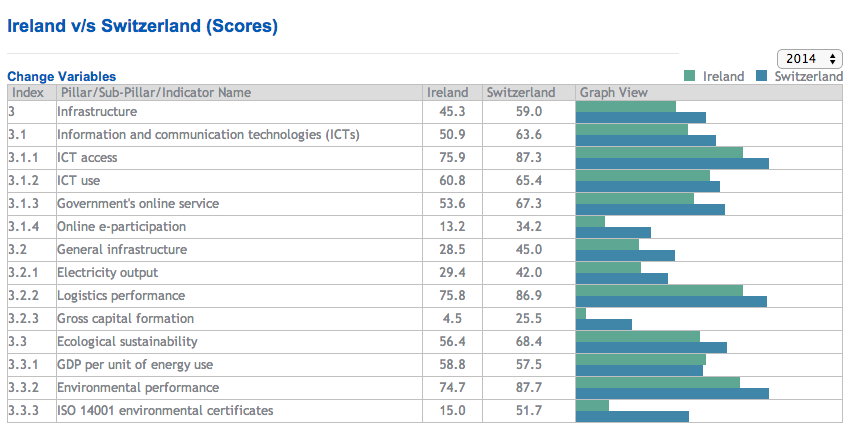 We outperform Switzerland in nothing, save for GDP per unit of energy use, which is of course consistent with the fact that a larger share of our GDP accrues to tax optimisation than in the already low-tax Switzerland.

We lag Switzerland in everything else... 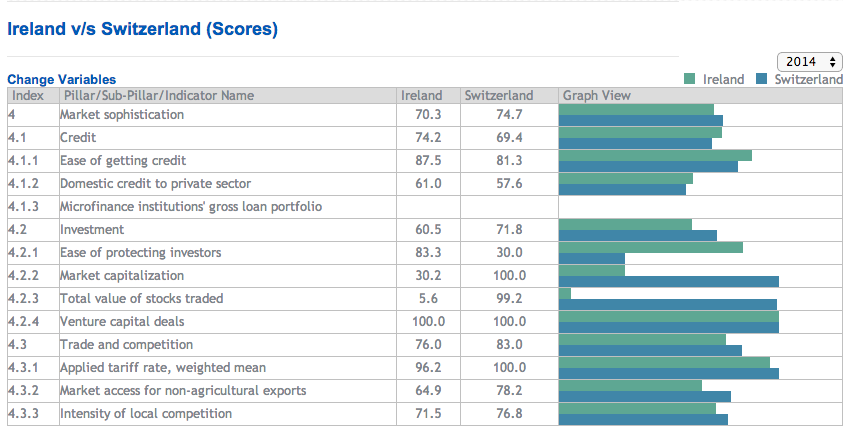 We lead Switzerland in Credit, thanks to allegedly greater ease of getting credit in Ireland (I am not sure what the Index analysts mean by that, given that our credit supply is negative). Despite beating Swiss in 'credit' we lag them in Investment, which, presumably means that while we borrow more and easier, we do not invest what we borrow... may be it is because our businesses are buying BMWs and Mercs instead of machinery and technology? I have no idea... 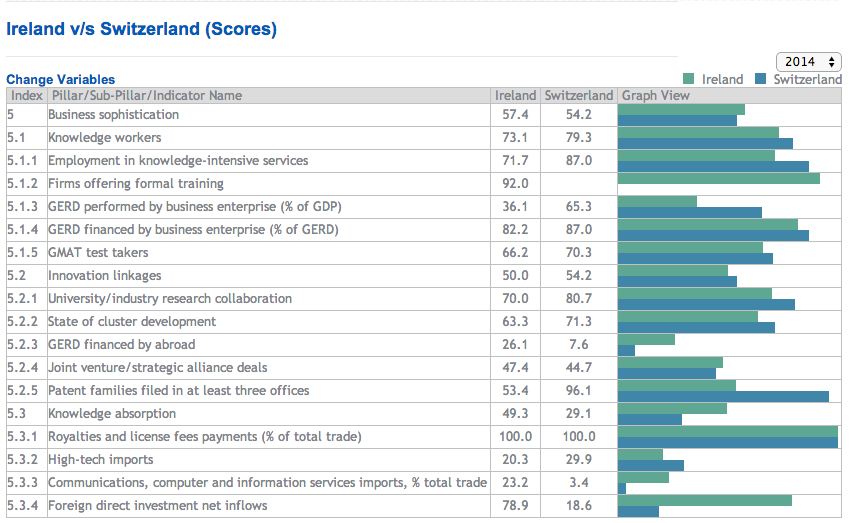 Remember that Ireland beats Switzerland on Ease of Doing Business. But with all that 'Ease' around, we are really not that far up on Switzerland in actual Business Sophistication... and if we strip out FDI inflows and imports of high tech equipment and inputs (a proxy for how many ICT MNCs we have 'operating' from here), we are probably actually ranked lower than Swiss. 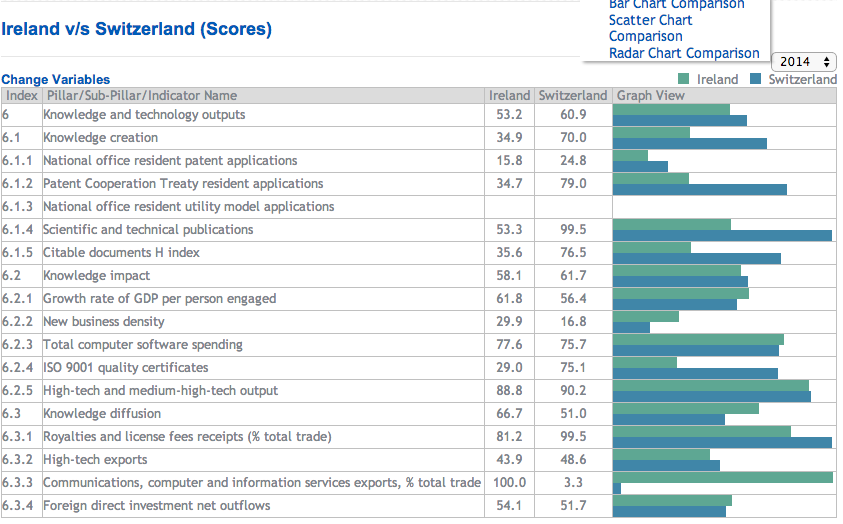 When it comes to actual Knowledge & Tech outputs, all of the above 'advantages' of Ireland over Switzerland vanish. Just as Savings vs Investments, we are good on inputs, but much less good on deriving anything meaningful from them. Control for tax optimisation activities of ICT services MNCs in Ireland and we sink even further below Switzerland. 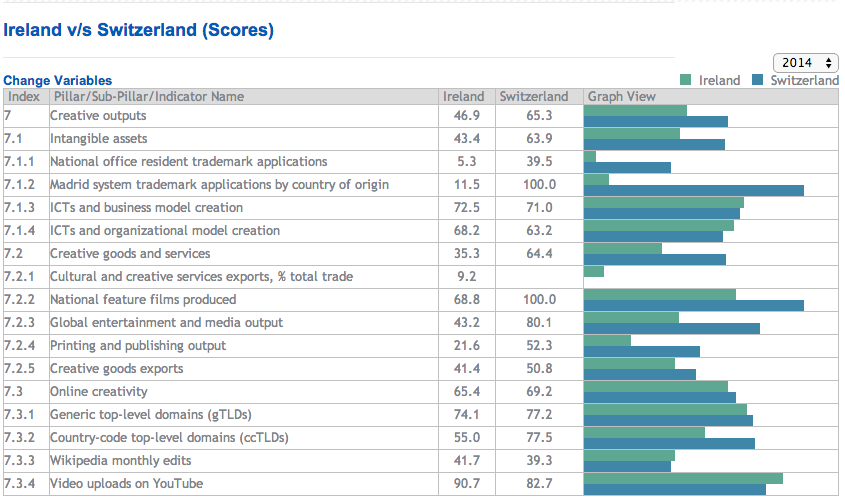 We are keen on painting Ireland as a Creative Land, while the Swiss are, as we often note, boring and 'Germanic' - aka not creative and too stringent. Right? Not really. Swiss beat us hands down on Creative Output metrics. We only outperform them in terms of Wikipedia edits and YouTube uploads - presumably due to the need to control our reputation by editing out unpleasant references to our social and industry and politics 'stars' from the public domain and down to our 'craic' in pubs and bars that get mistakenly posted on-line... I am, of course, being slightly sarcastic.

So net conclusions (on serious note):

Posted by TrueEconomics at 12:43 PM