A quick run through the numbers in employment and pay rates for the public sector for 2010.

A note of caution: these figures do not cover commercial semi-states or local authorities. Thus, per DofF accounts statement, there were 380,953 people on the direct Exchequer payroll in 2010, which includes 277,540 employees and 103,413 pensioned individuals. These exclude commercial semi-state employees 52,300 per latest figures available (Q3 2009) and employees of the regional bodies 37,000 (Q3 2009). The combined figure, therefore, is closer to 470,253 (of course, this omits those who are on semi-state pensions and who are in the receipt of pensions from local authorities and bodies).

Now, on to the numbers. 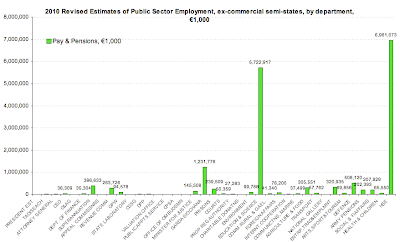 Now, let's take a look at private-public sector comparatives at the aggregate levels: Self-explanatory, really. But some more detailed comparisons are here:

The above figures relate (except for Exchequer balance sheet average employees) to CSO data for Q3 2010 on earnings and labour costs.

Next by the departments: 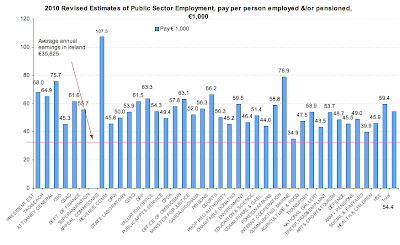 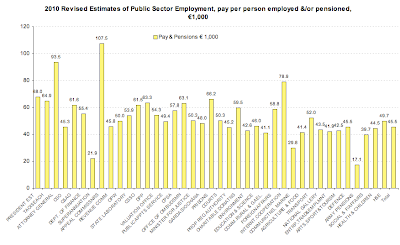 Enjoy the absolutely absurd outliers - the Appeals Commissioners - enjoying the total staff of 4 being paid, on average, 107,500 per annum. If one of these 4 employees a receptionist or staff worker, on, say 40,000 that would make the other 3 earning on average 130,000... that's of course is a pure hypothetical. Then there's the cost of our "International Cooperation" workers - hard at labour, the 190 employees here earn a meager wages of just 78,874 per annum on average. One can understand high earnings in highly professionally-concentrated services, such as for example the Attorney General (75,713 pa - still high, but we can give them a break), but what does the President's Establishment do to earn on average (for its 22 staff) 67,955 - which is in excess of average earnings in ALL subcategories of employment reported in the table above?

In fact, lets take as a benchmark the highest average earnings in the economy by sub-category (omitting public sector employment) - those earned in Information & Communication sub-category (50,203pa). Of the 38 sub-groups on the total Exchequer payroll, 23 sub-groups earn more on average than the highest earning economic group in the private sector. 16 sub-groups actually exceed by more than double digits (in percentage terms) the average annual earnings of the highest paid sub-categories in the private economy, as shown in the table below:

That, folks, takes some doing to achieve...
Posted by TrueEconomics at 9:07 AM

It seems to me that you are a proponent of Communism pursuing a single wage for all irregardless of ability, qualifications, skill, experience, responsibility or danger.
Highlighting exceptional pay does not prove your point. Public service worker numbers are concentrated in Health, Education and the Police in declining order; Health Services and Police are 24/7 and get an anti-social premium. Perhaps we could get the unemployed to work nights in these services to cut costs? Whats the problem with that?

but what does the President's Establishment do to earn on average (for its 22 staff) 67,955 - which is in excess of average earnings in ALL subcategories of employment reported in the table above?

God forbid you should actually ask them, Constantin?