This is the first post of two dealing with comparatives between Irish and Icelandic economies during the ongoing crises. The post was motivated by a number of recent articles in Irish press presenting Irish situation in terms of the allegedly stronger crisis performance than Iceland, as well as Paul Krugman's response to these (here). This post will deal with real economy comparatives, while the second post will deal with fiscal performance relatives. 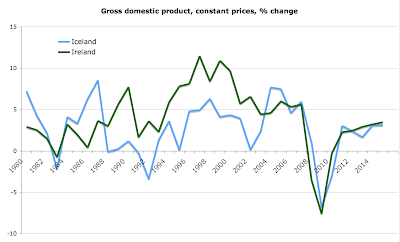 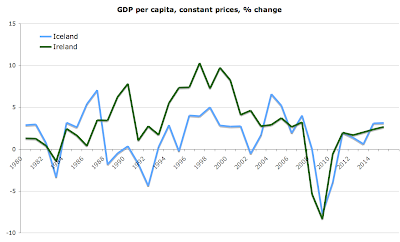 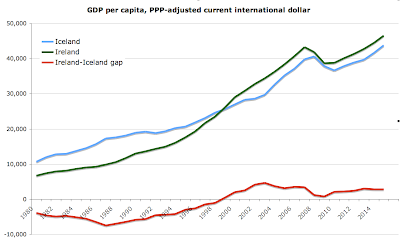 What about economic performance in the two countries relative to the global economy? Chart below shows the shares of each economy in total global GDP. In 2007, Iceland accounted for 0.019% of the world GDP, while Ireland accounted for 0.268%. By 2010 these shares were 0.016% and 0.237 respectively. The decline in Iceland was 15.79% and in Ireland 16.55%. So Iceland outperformed Ireland here. 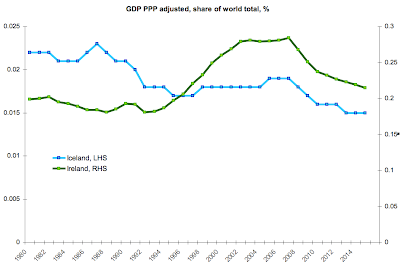 Comparatives with Iceland aside, however, Irish economy is expected to reach, by 2015, virtually identical level of global economy share as it enjoyed between 1996 and 1997, in effect erasing the entire period of some 20 years worth of economic growth.

As I mentioned before, Ireland clearly showing real deflation trend during the crisis, which is not the case for Iceland (in part, Icelandic inflation reflects devaluation of its currency). 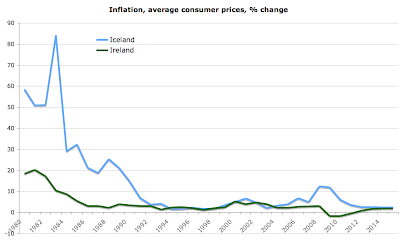 It is worth noting that moderation in Icelandic economy inflation has been dramatic and highly orderly since 2008-2009 peak. This shows that the economy is expected to be adjusting through its post-default and post-devaluation period in an orderly fashion. In contrast, Irish deflation during the crisis has been pronounced and persistent. 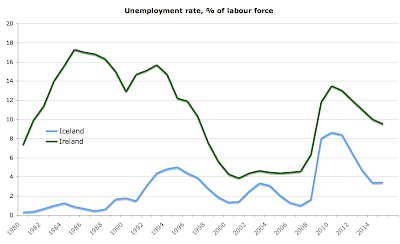 Again, note the dynamics of expected adjustments to peak unemployment in the two countries. IMF clearly forecasts unemployment to decline in Iceland at a much faster rate than in Ireland. Given that icelandic unemployment declines are more likely to arise from jobs creation, rather than emigration, while Irish unemployment declines are robustly influenced by rampant outward migration of displaced workers, these dynamics also reflect the deeply-troubled nature of the Irish economic crisis, when compared with that of Iceland.

Which, in turn, shows that more likely than not, stronger Irish performance in GDP growth terms above is really driven by the MNCs and their transfer pricing, rather than real economic activity at the domestic economy. Lest I be accused of voicing anti-MNC sentiments - we do live in a society where saying factual things can get us labeled anything totally unrelated to the factual evidence presented - MNCs activities are great. All I am suggesting is that counting on them to carry us out of our real economy collapse (unemployment, shrinking employment, declining real disposable incomes etc) might be a bit naive. 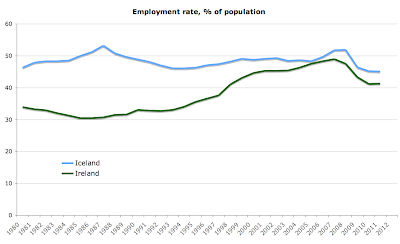 Again, in terms of employment rates Ireland is far behind Iceland – a sign that although out workers might be more productive (with a large share of this productivity accounted for by the transfer pricing by the MNCs), we tend to have smaller share of people working.

In terms of external trade, both countries have improved their chronic current account deficits throughout the crisis. However, the great exporting nation of Ireland have seen much more shallower improvements than those found in Iceland. Krugman makes exactly this point in his article (linked above), but he considers net exports instead of the current account. 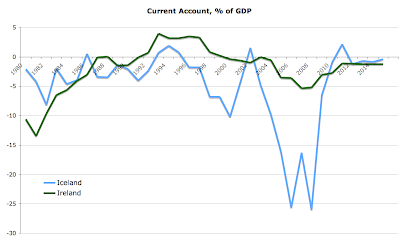 The reason I prefer using the current account is because of several reasons:
As we show in the next post, much of the reason for better external economic balance performance of Iceland is due to lower transfers from Government to the foreign bondholders, s Icelandic debt is expected to perform much better through the entire crisis. This means Icelandic current account is going to be relatively stronger than Irish one, as Ireland is expected to lose increasingly larger share of its economy to payments to foreign debt holders in years to come.

P Krugman is a "lefty" shill.

Since he has a Nobel, like Obama, "it is official"
(Copyright King's Speech)

I look forward to seeing increasing divergence between the performance of the two Island Republics.

Adams will undoubtedly add the six counties in due course.

A very enlightening post. I hope your next post will look into the interest rate issue - there seem to be some misconceptions floating around.

"Very high interest rates, which were hiked to 18 per cent in an attempt to stabilise the currency, further hit heavily indebted Icelanders."

and in another article:

"The fallout was immediate and massive: the currency collapsed and capital controls imposed to prevent it falling further, interest rates soared to achieve the same end"

O'Brien is mistaken in thinking that Icelandic interest rates were raised after the collapse.
Rates have steadily come down since 2008 and are now at 4.25% (http://tolur.island.is/).

O'Brien is also not entirely right in implying that Iceland didn't have a housing bubble or that the Icelandic construction sector has not suffered big layoffs, though it is true that this is not as big a part of the Icelandic story as it is of the Irish one.