I twitted about the latest conclusions from the IMF on the state of Icelandic economy post-banks collapse. Here are the exact details of the IMF statement and the statement itself. Emphasis and comments in brackets are mine:

"Financial sector restructuring is moving forward [in contrast, one may add to Ireland's]. Savings banks and non-bank financial institutions are being recapitalized [in Ireland's case, recapitalizations of the banks have been predominantly wiped-out by the continued writedowns, so net increases in actual capital have been negligible], and the supervisory framework is being strengthened by amendments that will be enacted in the coming months [no serious far-reaching amendments have been introduced in Ireland since the beginning of the crisis and the marginal ones that were are yet to be enacted].

"Moreover, recent agreements to restructure the debts of households and small enterprises will help put households, corporations and banks on a more secure financial footing, which is essential for a sustainable recovery [this stands in contrast with what has been happening in Ireland. In addition this directly and indisputably puts the blame for the policy errors in the Irish case onto our Government and EU shoulders, for it is clear that within the EU/IMF deal framework, the IMF was basing its policy proposals on their experience in Iceland].

“Policy discussions focused on the strategy to liberalize capital controls, fiscal and monetary policies, and financial sector reforms [none of these issues are even on our agenda].

Here is the actual press release from the IMF 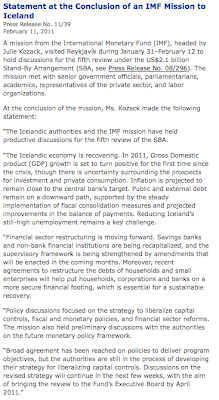 Posted by TrueEconomics at 10:44 AM

So it sounds like the IMF agrees with what the IMF has done, but is prescribing nearly the complete opposite for us? Does this make sense?

Repudiation of debt, default etc is actually baked into the mix in Ireland and other countries.

The IMF is just kicking the can, hoping, and collecting paychecks until the funding runs out!

Waiting for the other shoe?

Could be a long wait, look at Japan!