Let's do a quick exercise. Suppose we take our current account - defined as the sum of the balance of trade (exports minus imports of goods and services), net factor income (such as interest and dividends) and net transfer payments (such as foreign aid and remitted profits). Suppose every year we use the current account balance solely for the purpose of repaying our Government debt. How long will it take us to do so.

Let us start with some notes on methodology.

Our current account is in deficit - since 2000, there was only one year - 2003 - when we had a surplus in the current account (charts below), which really means our external trade was not enough to generate a surplus to the economy. So let us assume that the we can reverse this 180 degrees and that the deficits posted in 2009-2010, plus those projected by the IMF to occur in 2011-2015 are all diverted to pay our Government debt. 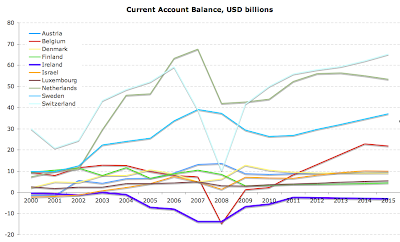 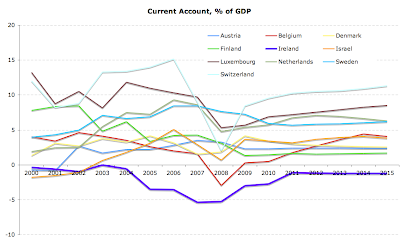 Notice - this is impossibly optimistic, as our Government does not own current account, but suppose, for the sake of this exercise that it can fully capture net profits transfers abroad and cut the foreign aid to zero, plus divert all interest payments on own debt and private external debts to repayment of the principal on own debt.

Secondly, assume that only Government debt is taken into the account (in other words, we assume away Nama debt, some of the quasi-sovereign financing of the banks resolutions, and all and any potential future banks and spending demands in excess of the EU/IMF assumptions, as well as all future bonds redemptions - the latter assumed to have a zero net effect at roll-over, so no added costs, no higher interest rates, etc).

In other words, here is what we are paying down in this exercise: 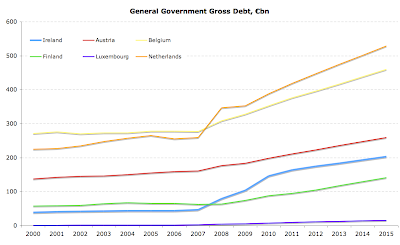 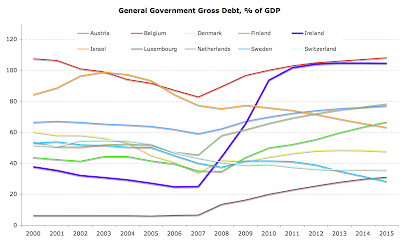 Now, suppose we take current account balances for 2009-2015 (projected by IMF) as the starting point. The reason for this choice of years is that they omit fall-off in our exports in 2008 and also the bubble years of 2004-2007 when our current account imbalances were absurdly large due to excessive outward investment and consumption of imports.

Next, assume:
So here is the result: 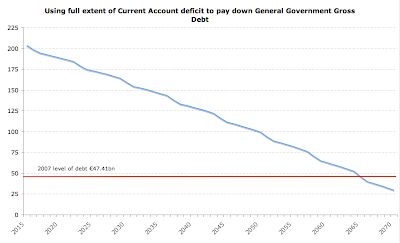 And the conclusion is: if Ireland diverts ALL of its net current account (2009-2015 IMF projections taken at 3% average growth rate forward) to pay down Gov debt, it will take us until 2064 to reach 2007 level of official (ex-Nama+banks) Government debt.

Note: incidentally - the charts tell couple of interesting side-points based on our historical debt path: 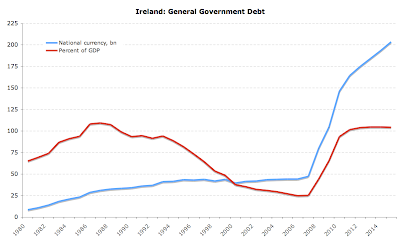 But, of course, in the 1980s there was no quasi-Governmental debt - the debt of Nama, some of the banks recapitalization measures and the debts that still might arise post-2013 from the Government banks Guarantees and resolution schemes. If we add Nama's 31bn worth of debt issued, this alone will push our 2011 debt levels to 121.8% of GDP and factoring in coupon rate on these, but 2015 our Official Gov Debt + Nama will stand (using IMF projections again) at 124.8% of GDP - well in excess of the peak 1980s levels of indebtedness.

Secondly, despite what any of us might think about the Celtic Tiger years, the Government never paid down the old debt, it simply was deflated by rising GDP. Which suggests that even during the Celtic Tiger boom years - our exporting economy was NOT capable of paying down actual debt levels.
Posted by TrueEconomics at 10:30 AM

Hi Constantin.
Great work!
I can only see one way out of it. Default, seprate from europe, print irish pounds and start over again.
De-regulate government, forget about minimum wage,and other f***n uncompetetive gov. requirements,write-off morgages,bring cost of living to low and offer 30cents to german bondholders. They will not cry and take it.
Why shall we put good money drained from taxpayer on bad money and write cheques to europe when we can use that money to restructure our economy and survive!
Hope somone will recognise it.

Not really news though, is it? Still, they will fire at you as a messenger!

Some people do not deserve freedom? We will see whom they vote into office soon enough.

Ahhh….so much hypothetical inputs it makes my head spin!!! A couple of points, first governments know that economies go in cycles of highs and lows over the course of years. I believe that most politicians try to bluff and extend policies during the down cycles knowing there will be the up cycle at some point to repair the budgets over time. What you have shown very well is that this time it is different. That even a good economic up cycle, Cetic Tiger II call it, will not be strong enough to bridge to the next economic down cycle.

Second, Since the end of the gold standard, economies and governments have used inflation as the tool to depose of past debts. You are correct, they never get paid off, just inflated to a point that the amounts look silly some 20-30 years later. Again, I’m not sure that will work this time. I see Japan, Europe, the US and most mature economies not being able to inflate their way out of debt. The emerging economies, China, SE Asia and India are the new havens of world inflation, they will be and already are the ones to see high inflation.

Flyover
Inflation in china is only a effect of the chinesse pegging to dollar to keep up the exchange rate. In order to do so they print RNB and buy as much of US debt as they can, They are sitting on 3trillion of this crap at the moment.Chinesse inflation is not a statistic but a political issue. Once they relise what have they done, they will stop printing, abandon US exports and restructure for domestic market. Bucks comes back to bernanke's door causing a hyperinflation we have not seen since germany 1920. hope by then white house will be burned down by demonstrators.
But asian economies will grow their governments once again and bury freedom of genuine economics once again...It is just the way it is.
WE CAN CHANGE IT BY IMPLEMENTING LUDVIK VON MISES WORK TO OUR KIDS!

Thanks Constantin, I used your graph on Gross debt in my article re Privatization not borrowings, http://funwithgovernment.blogspot.com/2011/02/privatize-and-cut-borrowings.html.