Looking over LR data earlier tonight, I decided to update the charts for dependency ratios, based on a combination of LR and QNHS. Here are some charts. 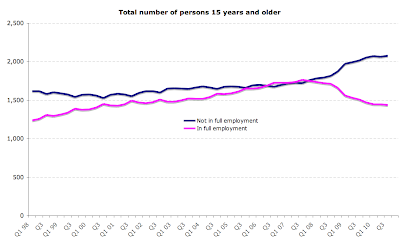 Not scared yet? Ok, another shot: 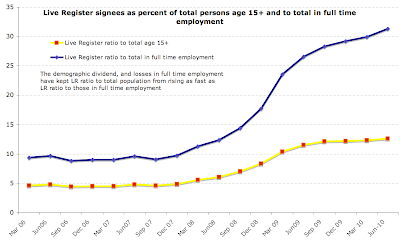 Oh, and another angle: 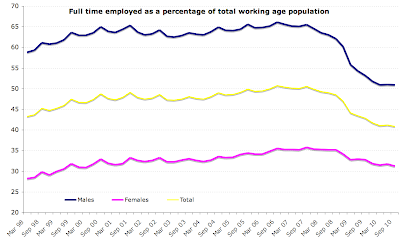 The above shows just how bad is the dependency ratio getting in Ireland during the current crisis.
Posted by TrueEconomics at 10:41 PM

The second chart is a kick in the teeth! It obviously isn't sustainable, but what is the alternative today?

I wonder about the 'full time' aspect though. I have heard anecdotal evidence of firms going on short time having trouble getting some employees back full time as it is not worth their while (in the short term at least). If you work 3 days a week, you get half your unemployment benefit as the rate is based (bizarrely in my opinion) on a 6 day week.

Some people are doing the calculation and finding that
3 days pay + 50% of unemployment payment < 5 days pay, after tax.

This is a depression and entire industries will disappear. That takes a decade or so.

Banks will not recover for two decades, if ever.

The deficit will be reduced to 3% by tax increases. Land prices must reflect their revenue return, say 5%. Primary crops will increase in value. Land taxes will ensure that there is no bubble in the future.

Then there will be a robust economy.