Headline stuff: the volume of retail sales (i.e. excluding price effects) increased by 4.6% in January 2011 when compared with January 2010 and there was a monthly decrease of 3.8%. Now, wait, that sounds good?

Not really. Let’s take another shot at that statement: volume of retail sales was up 4.6% yoy in January 2011, but it was down 3.8% on December 2010. In fact, it was down for the third month running, having declined 0.6% in November, then 1.9% in December and now 3.8% in January. The rate of decline is accelerating so far. And at a massive speed: x3 times in November-December and at x2 times in December-January. (Mrs G is putting that bubbly back in the fridge right now).

But what about the value of sales? Remember – CSO likes volume indices cause they tell you how much physical stuff was shifted through the stores. But let’s not forget that retail sales jobs and businesses depend not on volume, but on value of stuff being sold. Exactly the same picture here as in the case of volume. Value of retail sales was up 4.0% on January 2010, but it was down for the third month running (-1.5%) in monthly terms.

Let me toss in another factoid here. December sales were extremely poor in 2010, but not so much in 2009. In fact, December 2010 value of sales was down 4.0% on December 2009. So the rush post-Christmas into sales was much shallower in 2010 than in 2011. Hence, the current ‘boom in retail sales’ announced today by CSO is nothing more than a compensatory run onto the post-Christmas sales racks. (Mrs G is now putting away the celebratory bottle of Sprite back into the fridge).

And one more point – the value of sales index has been artificially boosted by rampant price inflation in several categories of sales where prices are state-controlled or subject to commodities price inflation (see below). 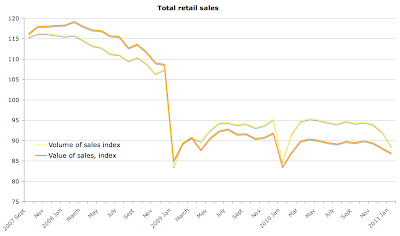 You can see what I meant by the spin above and below (notice the divergence of monthly and annual rates of change): 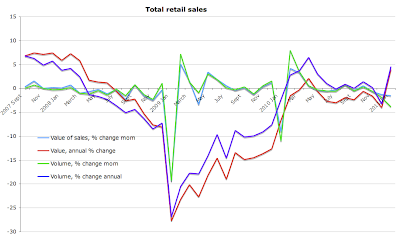 And just in case you want to see it: relative to peak retail sales are still declining 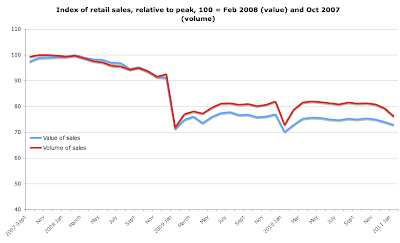 Faster rate of decline in the volume, of course, is due to rising prices (as mentioned above). 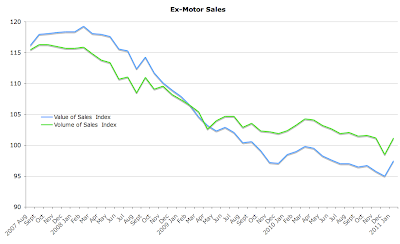 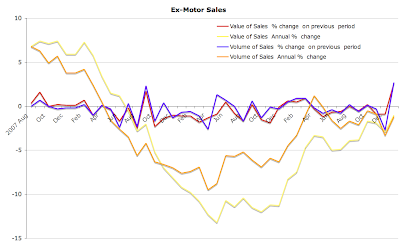 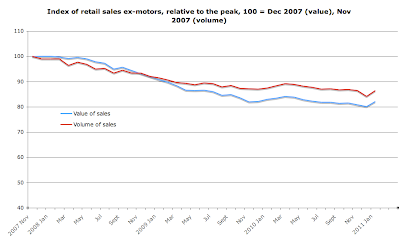 And take a look at the detailed sub-categories of sales:

Posted by TrueEconomics at 9:27 PM