For the last post on monthly data release from the CBofI, let's take a look at the interest rates environment at the retail level. 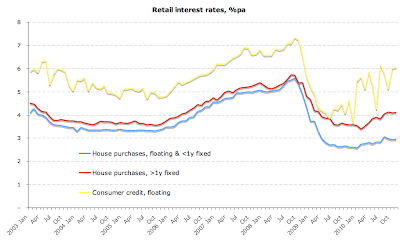 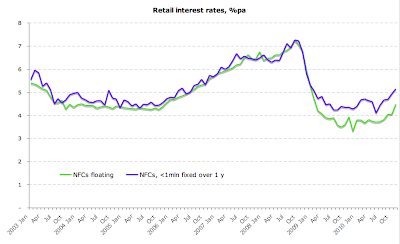 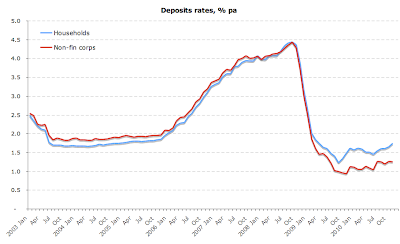 So for deposit rates:
Now, consider the difference between deposit rate and borrowing rate: 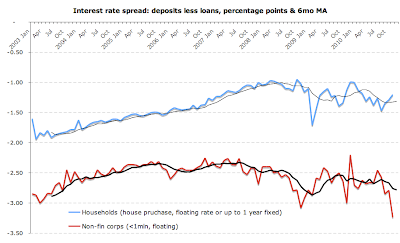 For households, the gap between earnings on savings and cost of financing mortgages (I used house purchase, floating rate or up to 1 year fixed) has moved in favor of savers until November 2008, and there after switched in the direction of favoring borrowers. The switch is extremely volatile and since August 2010 the direction has changed once again. Thus, since August 2010 the banks are moving into more aggressively charging mortgage holders and rewarding relatively more savers.

Corporate rates differential has been moving in the direction of penalizing corporate deposits holders. This process in now being reinforced since July 2010.

So here we have it - deposit rates are becoming less attractive to the corporates, just as more and more of them abandon Irish banks... who would have thought that charging our customers out existence can be a bad thing?

Finally, using CBofI breakdown on loans by type and maturity, I conducted a simple exercise - what happens if the interest rates on new and ARM mortgages charged by banks go up by 1 percentage point (incidentally - PTSB is doing just that, apparently). By my calculation, added cost of interest finance will translate into roughly additional €1.67bn being taken out of the economy. That's like having another Leni's tax hike over again for Irish households.
Posted by TrueEconomics at 9:22 PM

any chance you could show your calcs to arrive at the 1.67bn?