Having looked at the levels of credit and deposits through December 2010 in the previous post (here) lets take a look at the rates of change. 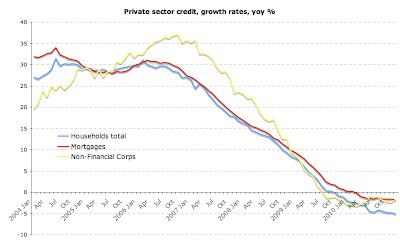 The chart above shows:
To highlight these dynamics and to dispel the myth of 'savings are rising' often perpetrated by some banks analysts, let's come back to the data on deposits. In December 2008-January 2009 there was a discrete jump in household deposits to the tune of just over €12.4bn. This jump is never really noticed by the analysts, but it reflects addition of the credit unions to the database. These are not new deposits, but rather the deposits that were held in institutions previously not covered by the dataset.

Now, let' remove this 'hump' and see what the banking sector deposits really look like today: 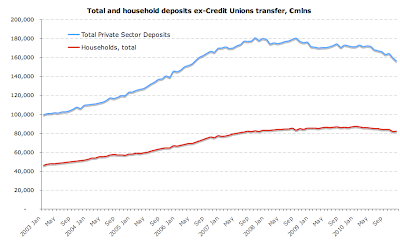 The chart abvoe does exactly this. And it clearly shows that:
And yet, we keep hearing (admittedly whimpered) calls for taxing 'sky-high' deposits/savings to 'release spending into consumption markets'.
Posted by TrueEconomics at 10:48 PM

The media reports of increased household savings had puzzled me for a long time. That people were able to tighten their belts so much that they could support themselves on decreased incomes and increase savings never made sense.

Thanks for clearing this up

now that is wild

Well, I dunno. On the final point, I think it's not unfair to say that a lot of savings are still existing and even increasing, just not in the Irish banks.

I guess this number is largely unquantifiable though.