In the last bout (right before the collapse of the financial markets in Autumn 2008) much of the inflation was driven by the rapidly rising commodities prices. These prices were in turn linked to the price of oil. Thus, one can naturally think of oil as an inflation hedge. In contrast, the traditional inflation risk management instrument – gold – has hardly kept up with oil prices in the short run back in 2008. So there is a natural question that arises in this context – which is a better inflation hedge? Well, for each month in 2008, in year on year (yoy) changes, oil actually beat gold as a counter-inflationary asset. Only this year have gold and crude exchanged places. But this is optics.

First, both gold and oil prices show some serious medium range inter-annual volatility. This volatility is driven by speculative motives, but also by real demand for oil as a storable commodity that is an input into physical economy. So to abstract away from seasonality and active speculative trading, consider both commodities prices in terms of annual averages. Setting 1968 price index for gold and oil to be equal 100, and adjusting for inflation, chart below shows that both commodities are way off their historic highs and that even in 2008 the two commodities were nowhere near their long term maxima when it comes to a cumulative appreciation since 1968. 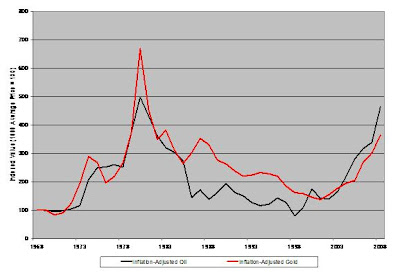 Pre 1970, average price of gold ranges around $38-39. It peaked in 1980 at $615 and then got stuck in the flat until 2007 when it breached the 1980s high in nominal terms. The average price of gold was $872 in 2008. Similarly, crude peaked at an average price of $91 a barrel last year. But despite nominal appreciation, oil is still way below its inflation-adjusted highs. Ditto for gold. To do this, gold needs to be at nearly $1,610 and oil at $98-100 per barrel. These are steep, but just how steep? Well, for oil this means roughly an 8% appreciation on 2008 annual average. But for gold this implies a whooping 84% appreciation on same benchmark.

Now, in annual terms, average annual inflation since 1968 was 3.6%. Median annual return to gold exceeded CPI by 1%, while oil did the same by 1.7%. So cumulative gain for oil in real terms since 1968 has been around 96.3%, and for gold it was almost a half of that, or 48.9%. Given that oil took a nose dive in 2009 while gold held its ground, long term comparisons suggest that 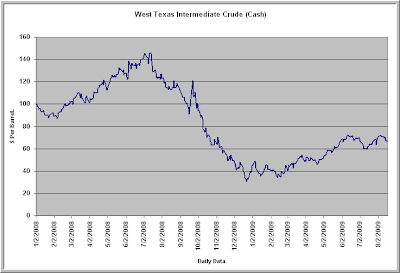 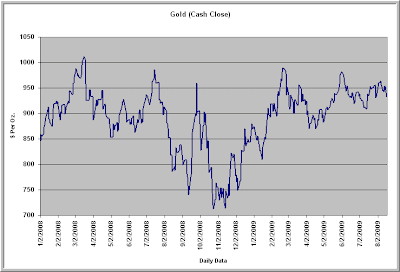 I happen to think that both are likely, though in much more moderate terms, with oil heading for $85pb in 2010 and to $95pb over medium term (5 years), while gold heading for $1,050-1,100 range in 2010 and to $1,300 over the medium term. That would imply annualized gains in oil price of roughly 4.8% and in gold price of ca 6.5% before inflation. Thus, assuming a reasonably well-underpinned by the current money creation worldwide inflation averaging ca 3% pa, this would result in oil beating CPI by 1.8% annually, and gold doing the same by ca 3.5% pa. Why?

One potential downside to this is continued orderly, but nonetheless pronounced disposal of gold holdings by the Central Banks of the more fiscally strained countries and the IMF. Although China and possibly India are likely to start picking up some of the rising supply through ‘private’ or invisible sales from one CB to another, this unwinding of gold reserves will weigh on the markets.

Per short term oil price volatility a recent example is in order. About two weeks ago, the US crude reserves have been reported to have fallen some 8.4mln barrels, prompting a serious spike in oil to $72.5pb. At the same time, gasoline supplies fell by 2.1 million barrels, distillate stocks declined by 700,000 barrels and refinery utilization reached 84% above analysts’ expectations of ca 83% - in a sign of tighter supply.

On gold side, watch the correlation in gold and stocks, with gold tending to max just ahead of stocks lows (note July/August 2008, October 2008, March 2009 and so on in chart above). In my view, we are set for another local maxima to be tested by gold in months before the end of October 2009.

Posted by TrueEconomics at 10:02 AM

Some free advice for readers. Do NOT invest in oil using the ETF USO (US oil fund) as a vehicle, as mentioned in the blog. As far as Im concerned its either a con, or suitable only for sophisticated traders.

I bought USO when crude was at $64 last November, When crude finally went above that level, in May of this year I went to sell my holding only to see that the price of the ETF had not tracked the price of crude and was in fact 40% off.

Other ETFs like GLD, I had no problem with. But stay away from USO.

L.A.R. raises a good point - I would note that my suggestion to "watch" something is not a recommendation to buy or sell.