NCB's Brian Devine issued a new update on Irish economy. Clean and tight as ever, and a worthy read. It makes the case for upgrading Irish GDP growth, but unlike a host of the note stamped out by Davy's boys on a weekly basis, NCB's note is backed up by a bit more real analytical beef.

"Irish data (PMIs, Live Register, industrial production, retail sales, exports etc..) have stabilized and in some instances risen from the lows. Consequently, the NCB economic activity index which had been indicating that activity was contracting at a seasonally adjusted annualized pace of 12% in February is now signalling that the economy was contracting at an annualized pace of 6% in May. Our more timely, PMI based, growth indicator is also well off its lows and continued rising in June and July (Chart 2)." 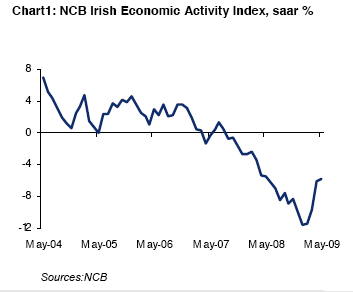 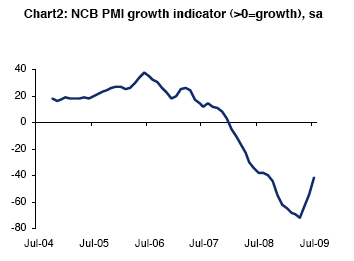 So far just fine. There is no claim, of course, that Ireland is growing again (i.e that we've bottomed out).

"When the Irish data is combined with better than expected data from the US and the Euro area it causes us to upgrade our annual 2009 and 2010 forecasts to -7.6% (previously -8.1%) and -2.0% respectively (previously -3.1%). While we are upgrading our GDP figures we do not see the trajectory of the recovery being any different than previously – the bottom in the economy will be formed in H12010, with sustainable growth not expected until H2 2010. It is possible that we get positive GDP on a q/q basis before Q3 2010 given the volatility in Irish GDP and GNP (Chart 3) but we do not see there being sustainable growth until H2 2010 (Chart4)." 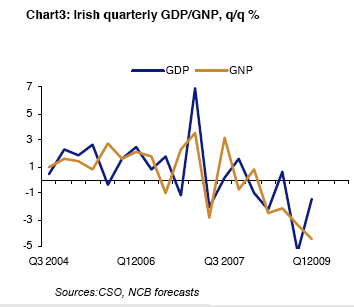 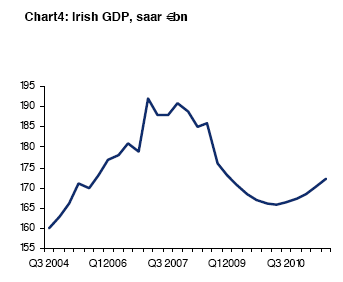 This is a little optimistic from my point of view, but not as widely off the mark as other brokers. I still do not see domestic growth posting any improvements on earlier forecasts.

On GDP side, there is lots of volatility, as Brian's note states, and the large share of GDP volatility is strategic tax optimization decisions made by the MNCs. Thus, should Intel/Dell/Pfizer and so on decide back in their US HQ that now is the time to book more profits outside the USA, Irish GDP might rise. Otherwise, it might fall. Who knows... But really, who cares.

Our economic problems in this country are not with the MNCs-component of the economy - they are with
Do any of these things have a chance of seeing an improvement should Pfizer decide to produce more Viagra here?

Will Dell shipping more PCs out of this country really change the fact that our 'flagship plcs' are like drug junkies depend on state contracts and acquisitions of competitors at the top of market valuations (preferred mode for growth as opposed to organic expansions throughout the 2000s)?

Will GSK opening a new facility for 200 scientist (of whom 100 come from outside Ireland, and GSK would love to get the other 100 to come from outside Ireland too, but, alas, it can't, for it promised the 'knowledge'-driven Ireland Inc that it will hire home-grown workers too) change the fact that our clientilist system is about to saddle the entire country with onerous debts of the few developers?

"The cyclical downturn is always going to end but growth does not necessarily imply an economy without problems. We are still in the camp that believes the recovery process will be long and gradual with unemployment, fiscal consolidation and the oversupply of property continuing to weigh on domestic demand. We see the main driver of the exit from the cyclical downturn being the contribution from net exports (expanding global demand combined with weak demand for imports)," says NCB note.

That is a polite way of saying that under the current policies and in the current economic development environment within the country, there is no chance Irish economy can pull itself out of this recession, especially out of its structural component.

A much better, more realistic analysis from NCB, as compared to used car sales lot than the one from the Dawson Office...
Posted by TrueEconomics at 3:21 PM