Economics 05/08/2009: Irish Exchequer - back into the furnace for a fresh meltdown

On to the Exchequer Returns for July 2009, then. As I predicted well back in February-March 2009, we are on track to reach the milestone of the total tax receipts falling below €31-32bn for 2009. I have not changed this prediction and I am still sticking to it.

The latest data is a disaster across the board:
Table below summarizes these gruesome stats, but what is already clear from this data alone is that despite Mr Lenihan and other officials heralding the turn around in Irish public finances that was 'recognized by international markets', their own data shows that this turnaround was about as real as Mars Attacks was a documentary. 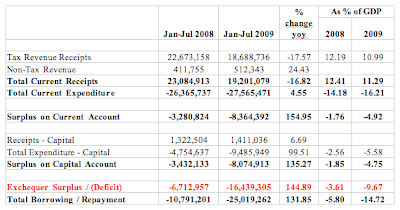 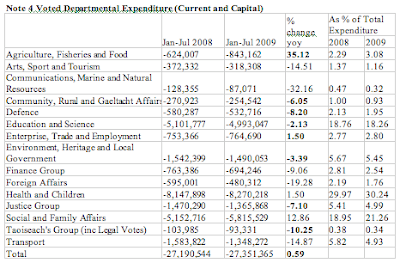 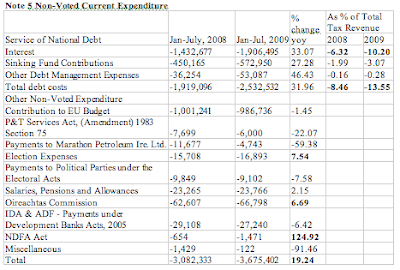 Non-voted current expenditure is often overlooked by analysts, but the figures relating to the burden of our debt (just 18 months into the fiscal 'solutions' to our crisis) are telling. Interest on bonds now accounts for 10.2% of our entire tax revenue (up from 6.32% in 2008). Total cost of financing these bonds now amount to 13.55% of entire tax intake (up from 8.46% in 2008). We are already drowning in a sea of debt.

Two other notables in the table above:
Finally, let us take a look at the tax heads performance against the April Budget 2009 profile (remember - the profile is only just 3 months old, so you shouldn't expect much deterioration in the calm and more predictable summer months, if, that is DofF can actually do forecasting). Ahem, not really good:
Table below illustrates

And now to the conclusion: it is simply impossible to believe that these numbers can be interpreted by anyone - international or domestic markets participants, shy of the DofF own employees and the delusionary Government we have - as a confirmation that this Government has done anything to address the fiscal crisis. The July stats are simply a loud confirmation of what we knew all along - taxing yourself out of the fiscal overhang does not work! Never will!
Posted by TrueEconomics at 7:44 PM

As ever, all we are seeing is a negative feedback on growth - grow or generate business mean attracting debilitating taxes. There either seems to be a belief in government circles that people will take whatever pain is needed without protest (recent history seems to bear this out).

The problem is that we have no recent (or not so recent) history for a full scale economic blowout -which this is becoming. Come september, as people get back to work, there will be new rash of decisions on redundancies and whether or not to stay in Ireland. Execution of any workplan to stem any further losses had in this country will be effected before the year end. I see no reason whatsoever why we will not be approaching 20% unemployment within a year.

Something has to give or someone needs to wise up in government before it's too late.

I'm getting worried about Brendan Keenan's commentary in the Indo. Normally he's quite sound but I think his analysis is the dog that's not barking. Take his reaction to today's news. The dilemma is what to do about this shortfall.

'...The reason for the slippage is not government spending, which is on target, but the fact that the economy is doing even worse than feared in April.'

- for heaven's sake. That's straight out of ICTU. 'We're not spending too much: we're just taking in too little money in taxes'.

'Even though its targets have not been met, the fact is that the Government has applied an astonishing €9bn fiscal correction, or 6.5pc of national income (GNP) since October..

'Of course this depresses the economy further. But opposition politicians, trade union leaders, commentators -- and, perhaps, pharmacists -- might like to note that, had it not been done, the IMF would be running the show by now.'

- and that would be worse in what particular way?

This is group think and it's worrying that B Keenan is falling into it.

If the tax take is x% below target, increasing tax to compensate will cause it to fall faster. It's a bloodbath out there! No one is spending and jobs are evaporating.

Cashflow has to be an issue. Where is the cash coming from? ECB is not going to feed this furnace for much longer. Is there any way to predict when this cash may dry up? I'd like to see someone try answer this. What are the emerging external pressures that could force the government's hand and can we put a timeline on these externals?