Here is a quote from the recently published paper on immigration to Ireland, Alan Barrett (ESRI) "EU Enlargement and Ireland’s Labour Market" IZA DP No. 4260, June 2009 that actually getting me going, folks (emphasis is mine):

"In order to get a sense of the educational profile of EU10 immigrants, we need to
draw on earlier research. Barrett and Duffy (2008) show the education levels of EU10
immigrants, along with those of other immigrants based on data from 2005. In Table
5, we present their figures.

As regards immigrants from the EU10, although they have the lowest proportion of highly educated across the immigrants groups, they still compare favourably with the domestic labour force in terms of skill levels."

Now, there are several things going on in this statement. Here is the table Alan actually refers to: 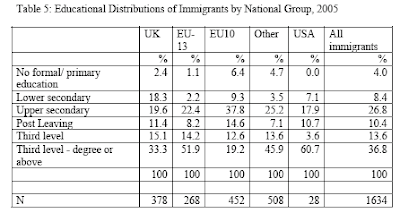 Obviously, disregard the USA part - there are only 28 observations in the entire sample of American respondents in 2005 data set (couldn't find any Americans, folks?). But the rest is pretty much in line with what we do know... And here are the issues:
So Alan's conclusion that EU10 migrants are relatively well educated only holds water when compared against the native workers, but not against other migrants, and if we are to assume that data for the EU10 migrants is free of self-reporting biases and errors, and if their degrees are actually fully comparable to those in the rest of the world.

Here is a different look at the same data (augmented with the latest CSO stats):

There are more fundamental difficulties in making these comparisons that really are not Alan's fault, but do distort analysis.

One simply cannot bunch those EU10 migrants who arrived before the Accession 2004 (many) and those who arrived after (even more). In econo-speak, there are cohort effects.

These cohort effects distort 2004-2005 data, because in those years, majority of EU10 citizens residing in Ireland were most likely the same residents who lived here before 2004. Few years back I published a paper on the topic and showed some evidence that the pre-2004 group - selected under meritocratic migration policies - was indeed of a better quality than those that followed them post-2004. Not surprisingly, given that back pre-2004 they had to prove that they can compete against Americans, Europeans, Asians and the rest. Post-2004, this requirement was removed - the EU10 states were simply encouraged by this Government to displace workers from elsewhere. Of course, such displacement took place in the sectors where skills are less important than brawn - construction, retail, hospitality. Hence, not surprisingly, many of post-2004 workers were elected (and elected themselves) into lower paying domestic economy jobs, for:
(a) the path of least resistance made them move into jobs available to them, and
(b) they actually might have had difficulty proving to productivity-focused MNCs and a handful of externally trading domestic firms that they have better skills than, say, Indian software engineers, American finance specialists and so on.

Third problem is in the data itself. Virtually every taxi driver in NY is a self-reported 'medical doctor', 'dentist', 'pharmacist', 'physics professor', 'engineer' or a 'lawyer'. And yet none work in their fields, despite the US operating an extremely meritocratic system of qualification examinations to confirm medical degrees, for example, or to pass your bar exams, has comprehensive degree recognition culture and requires no specific certification for many fields. This is the issue with self-reported data when it comes to educational attainment questions - it is often of extremely poor quality.

Workers from the UK or US or EU13 might have fewer reasons to embellish their qualifications - they do not perceive this labour market to be discriminatory toward them. And, if you hold a degree from an internationally ranked university, you have nothing to prove to anyone. Those from the countries identified by their compatriots or Irish media or trade unions as being at risk of discrimination will have an incentive to gold-plate their qualifications. And if the university from which you obtained your degree does not rank in top 100-200 in the world, well - you just might add that extra claim to your qualifications, to strengthen your CV. Not all will take such steps, but some (how many?) will.

These, in my view, are very interesting areas for inquiry. I certainly wish Alan would have explored at least some of them. And I certainly hope he will update his data sources, for 2005, hmmm - that is ancient history by today's norms.
Posted by TrueEconomics at 4:44 PM

A proper immigration policy places a premium on each immigrants contribution to Ireland.
This comes via conditions on visas such as severe restrictions from accessing state benefits and their companies providing private health insurance.
It only makes sense to allow immigration from qualified people who will increase productivity and wealth to the country way above any costs they incur.

It ensured industries which are inappropriate to a developed economy thrived on mass ,unskilled labour(eg mushroom picking).

Costs to the public purse increased rapidly during the 'boom' while productivity and wealth added per head declined rapidly .
Unfortunately this rapid decline in productivity was masked for several years by massive transaction taxes from an economy diverted from progressing up the wealth chain to one of building dead end, no productivity houses.

Of course the last couple of years have also seen a massive rise in unemployment amongst accession state immigrants and massive state benefits being paid out to them.
It is clear that their salaries were too small to generate enough income tax to even pay for one years amount of benefits.


Its reasonable to conclude that productivity and wealth has declined on average each year since mass immigration post Nice 2.

Therefore the benefits of immigration from the accession states have been discounted to such an extent that it represents a huge economic cost to the State.

If a software engineer from india immigrates here he rents privately or buys a house.His footprint in the State is slight.Because of high education and the amount of work required to qualify for such a visa he is more likely to be law abiding.
He will pay higher taxes,drive a better car (no smelly clunkers) and pay for his own health insurance.
In the case of the accession state immigrants all these marginal costs are being picked up by the Irish taxpayer.

The Irish professional classes will do their damndest to restrict entry from qualifed accession state doctors,lawyers etc.
The fact they dont give a damn about the lower orders here is a guarantee of racial conflict ahead.

"A proper immigration policy places a premium on each immigrants contribution to Ireland."

I agree. In 2004 referendum I argued publicly that all Accession states citizens should be allowed to work in Ireland with no restriction, but that their access to social welfare and other state benefits should be granted only after they establish long-term residency in Ireland. I suggested 7 years back then.

"It only makes sense to allow immigration from qualified people who will increase productivity and wealth to the country way above any costs they incur."

I would also allow access by entrepreneurs, provided other conditions (legitimacy of wealth and investment etc) are met. And again, no access to state benefits.

It ensured industries which are inappropriate to a developed economy thrived on mass ,unskilled labour (eg mushroom picking)."

I agree, this did happen and thus productivity did fall. Now, before Nice 2 mushroom industry was thriving here as well, backed by the same cheap labour brought in on work permits. Work permits system had to be reformed as it was a de facto form of serfdom, but Accession did result in an explosion of low paying jobs.

I don't think there was displacement as such, as welfare rolls did not rise significantly in those years. Instead, existent social welfare recipients ripped windfall gains from growth and they were protected from ever needing to seek employment that would put them into competition with EU10 workers.

One thing we have to be cautious about is in homogenizing all EU10 workers and residents of Ireland. Many - and I myself know quite a few of them - are real professionals, trainee accountants, advertising creatives, some used their time in Ireland to finish their studies here. These workers are not a problem. They are not going on welfare rolls today and would rather move to other countries rather than live off an Irish taxpayer.

But in a nutshell, you are right - immigrants who arrive here through competitive system (too often unfairly competitive, as in being rigged against them) of work permits, green cards and visas are more likely to become better anchored into this society, invest in their lives here (kids, schools, healthcare, homes, etc). They also bring much higher human capital with them than those from EU10 (again, on average, and we have to be careful not to lump together here some superb additions to this country from EU10 states as well).

You are spot on in your view of the Irish professional elites. Throughout decades they have used artificial means for capturing power and wealth from the lower classes and from anyone they deemed a threat to their order. These were:
- use of Gaelic as an accession test for public service jobs;
- use of Social Partnership to re-distribute wealth;
- use of PPPs to redistribute public contracts;
- use of development permits and opaque zoning rules to restrict access to investment opportunities;
- use of cartel-like self-regulating professional organizations to artificially cap the numbers of competitors;
- use of the unions to run a closed shop across vast sectors of Irish economy, including some academic institutions to date;
- use of protective pricing schemes to restrict competition from abroad;
and so on.

Will this trigger a class (not racial, really) conflict? I don't know. NAMA is one of such redistributive schemes, but I am not seeing anyone marching on the Dail against it.

The state runs a clientilist system of benefits in Ireland. Businesses and policymakers here are locked into a cross-subsidisation scheme that captures well over 70% of our GNP. Thus, we riot when our immediate hand-out is taken away (e.g health cards for over-70), but not when the entire future generation is condemned to slaving for the half-baked banking rescue scheme.

Last week Proffessor Walsh of Limerick University stated on radio that there are ,in his estimation 200,000 fraudulent PPS numbers in use meaning,I presume 200,000 illegal immigrants.

Cross referencing the number of work permits with PPS numbers issued of some Non EU nationalities seems to validate his assertion.

Have you carried out any studies or research in this area?