Before we begin on Live Register - I would recommend an excellent post by Myles on Irish automotive sales - read it here.

So Live Register is in, prompting some cheerful commentary as per slowdown in the rate of increases in unemployment. Ahem... not that I noticed.

To be honest - there are some signs of a slowdown in the rate things deteriorate, true, but these are:
So here are the details: 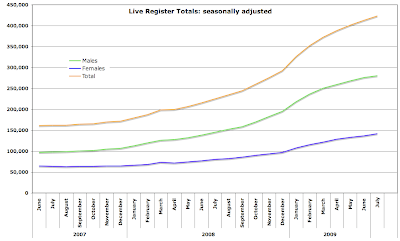 Note slight acceleration in females (more on this in a sec) and basically imperceptible changes in the slopes? So much for the 'green shoots'. 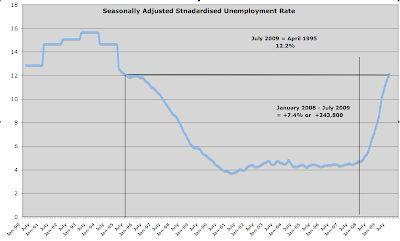 The real disgrace is in the unemployment rate - back to April 1995 now. Less than 14 months of economic destruction and 12 years of new jobs creation erased. Surely, Bertie would say that the doomers-and-gloomers should now hang themselves. 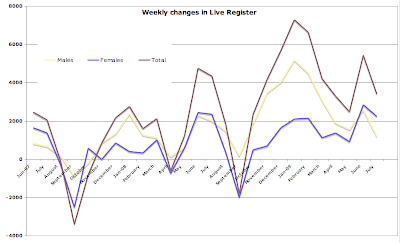 Weekly changes in the LR plotted above. Again, one note of caution - the averaging was done on 4 weeks basis in June and 5 weeks basis in July. If it was done on 4-weeks basis, the weekly average in July would be 4,286, still below 5,530 in June. Then again, July is a much slower month in general for any sort of business strategy change, let alone for mass layoffs. Let's wait till October/November... Again, note females - the average weekly change also declined, but at a much shallower rate, pointing to the pressures on female employment rising relative to males. 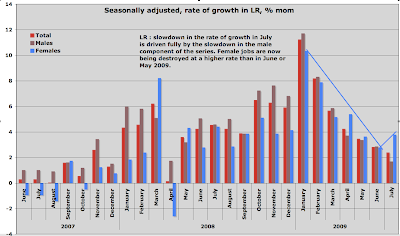 Now, to monthly rate of growth (chart above). The rate at which females are signing is up in monthly terms. This is the evidence of really bad news to come. Recall that layoffs happen sectorally and sequentially (meaning last in = first out). Females' job tenure is shorter than males' over economy, so if new sectors come on-line for mass layoffs, and these sectors are not dominated by males (like construction in the past), we should see an uptick in female unemployment rising faster first, followed by males in the same sectors. While there is no certainty as to whether this is what's happening, that blue line trending up in the chart above is a reason for concern and suspicion that a new wave of unemployment increases might be gaining mass. 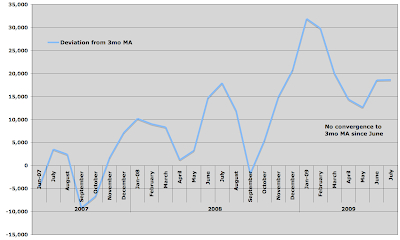 Last chart is showing monthly figures deviations from the 3-mo Moving Average in total LR. This was converging toward the long run trend between January 2009 and May 2009 (the blue graph heading toward zero), but it now diverged again in June and July. Last time we crossed the long run trend line was in September 2008, which marked a smaller peaking cycle of April-August 2008. Duration of the last cycle was just 4 months. The current cycle is into 10th month and now apparently diverging further once again.

All of this makes me very conservative to call and 'improvement' - the series, in my view, are suggesting:

Posted by TrueEconomics at 2:42 PM

so we really are screwed. we have to face the truth: it's either emmigration or we dust off the laffer curve and take our chances.