NAMA has dominated newsflow in this country and on this blog. But the world around us still evolves to the laws that ignore the existence of the Senile Trio of Brian+Brian+Mary. So to recognize this - few housekeeping items that built up over the week.

First, the Eurocoin is out and it is time to update my Euroarea GDP projections. Chart below summarizes. 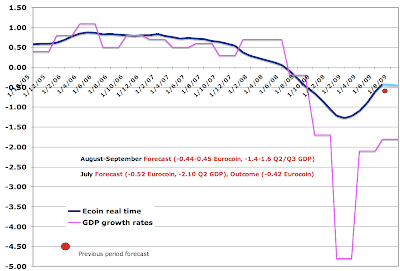 Main features to note:
Nouriel Roubini’s RGE Monitor also expects “the cyclical recovery in the eurozone [to be led by Germany and France and] to lag recovery in the US, the BRICs and non-Central and Eastern Europe (CEE) emerging markets”. This is relatively consistent with my expectation for Eurozne to bottom out in the sub0cycle around November-December 2009. Assuming there is no double dip. “Among the main factors muting Europe’s recovery in 2010 are a permanent decline in potential output; unwinding pressures of large internal imbalances leading to deflationary pressures; a more restricted monetary and fiscal policy response compared to the U.S. and especially to China; a leveraged financial sector with too-big-to-fail institutions and too-big-to-save features; and a strong reliance on bank funding by the corporate sector subject to a larger financing gap than that seen in the US.”

There are interesting NAMA-related bits in Roubini’s forecasts: “In order not to impair the banking sector’s lending ability permanently, a quick disposal of bad assets is warranted. Lending to the private sector is slowing quickly, and for small and medium sized enterprises with no access to capital markets, bank credit lines represent the only recourse for liquidity. Based on IMF and ECB estimates, total bank losses in the eurozone will amount to between $650 billion and $900 billion, implying substantial additional recapitalization costs.” So two things jump out: 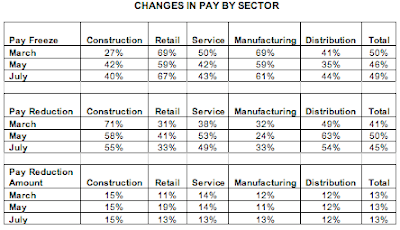 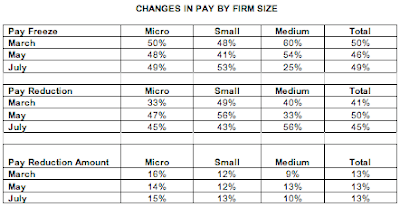 Jack O'Connor of SIPTU was not available for a comment on these.
Posted by TrueEconomics at 3:49 PM

I'm no fan of Fianna Fail, never voted for them, probably never will but i think your personalised attacks on Brian, Brian and Mary don't improve the quality of debate. I think they do your arguments a disservice. Just my opinion, you can take it or leave it.

HF, perhaps you are right. The debate can (and probably should) stay academic.

This Triumvirate is also responsible for forcing my family (and other families, to be academic) to give up increasing shares of our incomes to pay the bills of their cronies, supporters and those whom they fear.

The same Triumvirate is also responsible for wasting my money (and again, academically - other people money) on employment of incompetent, greedy, backless advisers, consultants, experts, and so on.

They are also responsible for either incompetence or outright lying when they make public statements on many matters - NAMA being the latest.

Two of them are incapable of doing their jobs no matter what conditions are and yet myself (and millions of, academically speaking, other Irish people) are paying them more that Germans pay their leaders for their incompetence. They are lottery winners, in so far as their income so disproportionately beyond what their talents and aptitude can bear in the real market.

These things make their 'leadership' a personal matter.

Now, I actually have nothing against the FF party - there are good people in it, there are competent people in it. I feel sorry - in personal terms - for Brian Lenihan, who would be best suited for a different role in the Government and instead has morphed into a mouthpiece of his department.

Thanks for encouraging the comments. Personally, my two cents worth is that to me NAMA makes sense in terms of dealing with the huge deficit in expected earnings from property - cleaning the banks up to allow them to get back to providing credit to the real economy. If done right, we can expect an income stream from good loans and those loans that can't perform - well better to have NAMA deal with developers one by one and look at all their multiple loans with different banks together and foreclose on them when payments are not being made. In Japan my understanding is that the zombie banks took years to deal with the non-performing loans from developers - we can't expect our banks to be any better - so then take the issue out of their hands. It seems to me that the time is too late to start talking about alternatives - a national government or non-partisan strategy for the crisis would have been great, but alas no sign of that. so what is needed is to ensure that NAMA is as good as it possibly can be, e.g. reputable people running the show and transparency. Secondarily on the economy in general, public sector wages cuts have to be brought in (and i say that as a public sector worker myself - tax me, i'm paid a good wage and have a great pension, my tax money should be put to building a strong sustainable economy for those not as lucky). Thirdly, let's see some rigorous investigation of the most egregious recklessness of the past decade and learn lessons, in planning, banking etc. Ideally this should lead to prosecutions or fines or reprimands as soon as possible. Thanks for all the insights and information you provide.

I don't really understand why the commenter is upset about the attacks on the government ministers. These three people are responsible for inflicting more havoc on Ireland than the combined efforts of Oliver Cromwell and the Potato Famine. Japan never guaranteed its bank debts. These three did. From a personal economic point of view, I couldn't care less. I live in the USA, and I own a pile of Put Options on AIB which will cash in when the bank inevitably collapses. But I have young nephews and nieces in Ireland, and I am furious that these poor kids will be forced to emigrate because of the criminal incompetence of the Irish government and those who elected them again and again for the past 20 years.

The reason I get "upset" with vehement personalised attacks is that is deflects from clear thinking on what is required. As I mentioned I've never voted for these people. Anger is not the solution to the problem - good communication of clear ideas is needed.

Well, both your points are not mutually exclusive. But what frustrates me, and actually drives me into a personal mode is the lack of engagement that Irish corporate world and our official policy makers, inclusive of opposition parties and academics show toward those of us who actually step outside the boundaries of consensus. Ireland is the only country I know where there is no privately sponsored policy research that is independent of the state interests. For everything I wrote over the last 9 years, I was never engaged by these 'commissioning' bodies here. I get more research grants from other EU countries, as my own country pays for the intellectual equivalent of blended porridge from the 'official' advisers. And I am not unique - at least half a dozen other social science researcher - all labelled 'right wing' - irrespective of their views - have had exactly the same experience. Two have now left the country for good! I can give you many examples when people active in policy research here and internationally have been denied academic and other promotions and jobs here - you wouldn't believe it. Of course, if you come at the policy criticism from the left, you just get funding from the state, its clientelist NGOs and our 'socially responsible' corporates. But god forbid you defend taxpayers and/or private sector entrepreneurs. Or if you come from a perspective of challenging the cozy cartel of Social Partners...

At any rate, let's get back to being objective...

Catharsis is great. People have to have the means of blowing a valve now and again. People smiling and being polite all the time reminds me of those quiet town scenes in Psycho.

A slight aside but on something you discussed a few days ago - the O'Carroll Case. I think we only have a day or so left before appeals can be submitted and then it's receiveship time for sure. What's the chances that there'll be a final push to get O'Carroll into examinership on the 11th hour. The last thing you want is a whole pile of property being dumped on the market for half nothing while NAMA is soaking up the stuff at near loan value levels. If this thing goes into receivership, I think NAMA's existance could get a hammering...the triad are not exactly out of the woods yet.

I think a liquidation of O'Carroll properties would facilitate the process of "price discovery". That is, let's find out what the market thinks this stuff is actually worth before Nama starts to buy any of it.

There's some substantial objective points there - the degree of 'group think' in policy making and a distrust of trying new perspectives. Thanks again for adding to the quality of the debate.