Forward looking update: I am working on detailed analysis of the latest ECB data on banks activity survey across the Eurozone, plus Ireland's own Earnings and Labour Costs data for Q4 2008... posts will be coming on these two, so stay tuned.

Now, I am skeptical about the 'Green Shoots' theory primarily for two reasons:
Now, I am much more comfortable with 6-months scenario of seeing the return to growth - albeit to moderate growth at the very best (especially when it comes to Europe). Here, we have Composite Leading Indicators from the OECD that do a decent job tracking trend (but not inflections necessarily) pointing to some interesting things. That said, I would be not as upbeat as OECD in interpreting these results... 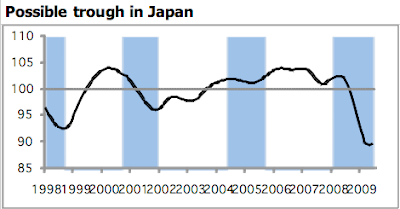 Happy hunting.
Posted by TrueEconomics at 1:59 AM

Inflation in the US - will it be exported or will the dollar decline??

I expect a dollar crisis in late 2010 or early 2011. I think the Fed will have to raise interest rates much sooner than it wants to.