Travel figures are in - abysmal showing for tourism and leisure industry here. As predicted, the fall off in foreign visitors to Ireland continues, while the number of Irish people traveling abroad is showing signs of stabilizing.

Per CSO:
So here we go - jobs are being lost, hotels are shutting down, airlines are cutting services (and revenue), while DAA is raising charges, the Government is raising taxes and our venerable retired bureaucrats (the ones with IMF appointments on their CVs) are penning idiotic missives about how the crisis is the fault of the ordinary folks (SBPost) and how tariff protection of internationally trading sector is a great way to build Irish economy.

Sadly, Michael O'Leary is on vacation or I would have brought to you his explicative in the address of the Leinster House on the latest CSO release. Instead - a picture: 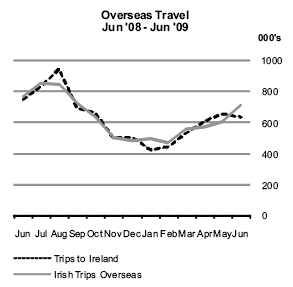 Market to watch: RWR-Reit index and US financials.


How long the circus of our Exchequer meltdowns can continue, one of you asked.

In May this year I wrote in a related note (here): "Cowen also stated that "we have a way out that is working". Remember the brilliant German movie Downfall about the last days of the Third Reich? (See a reminder/spoof here). Say no more... our unbeloved leader is in a state of delusion that is equivalent to awaiting the arrival of a miracle weapon (which does not exist) as the real enemy tanks are crushing your city."

They have borrowed up some €25bn on the estimated liability of of over €35bn (counting recapitalization demands) that in their view will get them (alongside NPRF cash and left-overs from 2008) through this year. The Government is so short-termist that they have no clue / plan/ idea as to what happens after.

From this vantage point - anything is possible. Note the latest ECB statement today:

ECB stated that there are “increasing signs that the global recession is bottoming out”. Eurozone economy's pace of contraction is “clearly slowing”. Compared to July when it was noted that the activity “should decline less strongly” than in Q1 2009 - the latest statement suggests the ECB is already pacing potential interest rates increases in months to come.

And then in Q&A, Trichet did leave open a possibility that growth outlook for the Eurozone might be revised upward in the forthcoming ECB Staff Macroeconomic Projections before September meeting. The forecast update might move growth from current -0.3% expected for 2010 to 0% or even the consensus level of 0.4%. Another issue is timing - the ECB used to forecast return to growth for Q2 2010. This time around, no mentioning of Q2 anywhere, suggesting they are moving for growth to resume in Q1. And then there was Trichet's view that deflation is temporary and that by the end of this year we shall see inflation.

All of this points to a rising interest rates environment sometime in 2010, possibly as early as the end of Q1 2010 if inflation firms up and growth resumes in Q1. Remember, all that quantitative easing will have to go somewhere - i.e into price increases. When that happens, Mr Cowen will be sweating profusely in his air conditioned Merc, because the la-la land of endless borrowing will be over in a second.

Before then, he will pile cash reserves through aggressive borrowings from the ECB to make sure he can pay public sector wages and keep unions from completely imploding. The ICTU/SIPTU have already sensed the weakened leadership and are ganging on Mr Cowen's positions left, right and center. The problem is that comes Q1 2010, the QE will be over, as will be the Lisbon vote, so Mr Cowen will face the real problem of having no cash left by, approximately Q2 2010 or possibly the end of Q2 2010 - depending on how his borrowing will go down in the next few months.

What bothers me most, however, is why on earth no one in the markets realising this?

Posted by TrueEconomics at 12:10 AM

In which market do you mean? The bond markets?

"... our venerable retired bureaucrats (the ones with IMF appointments on their CVs) are penning idiotic missives about how the crisis is the fault of the ordinary folks (SBPost)..."
Thank you. That article, and that sentiment in general, really rub me the wrong way.

One of your "pet" complaints is the flight tax but I would be of the opinion that a 10 euro tax is not a disincentive nor a deciding factor among proective incoming visitors.

Visits are down because across Europe and indeed the world fewer visitors are travelling. Granted, the 10 euro tax will not bring in that much in tax revenue, but it is false to state that it is the factor which is driving down the number of visitors.

In fact, I dont think one single visitor would have been put off by such a small amount (10 euro) in comparison to the rest of the costs that they have to bear during a stay here. 10 euro is insignificant in any holiday budget.

My advice would be to get off that hobby horse .... there are biger fish to fry that need your attention.

MK, granted, it is a small amount, but considering the overall costs of flying and that you can have a flight booked today for less than Euro10 one way to a number of destinations, in effect, holiday tax is more than 100% of the reasonable fare. Furthermore, for a family of 3 - my case - you have Euro 30. It has not deterred me from travelling, but that is simply because I am price-inelastic when it comes to rest.

You are right - there is bigger fish to fry. May be this smaller one is a bait?

Oh, and one more point - you see, travel tax is not an environmental externality tax (it was not passed as such and it was not ring-fenced), so it is an example of completely gratuitous, arrogant tax. This, no matter the size of the levy, has to be beyond economics - it is about morality and ethics of the Government that simply without any accountability or rationale decided to rob its own citizens of their rightly earned money. That this robbery is small does not make it palatable.

true, a 10 euro tax relative to the cost of a nearly-zero euro flight might seem high in % terms, but even 30 euro for 3 pax is not onerous when compared with the cost of taxis to and from both airports or even car park charges and other holiday charges.

As you correctly say, it wont deter people from travelling as they are price-inelastic when it comes to rest, or at least 10 euro doesnt bother them.

> it is an example of completely gratuitous, arrogant tax - it is about morality and ethics of the Government

Ethical Government is an oxymoron! The Government has the power at any time to "rob" us (the voters) which is why we always need to vote and vote wisely. My wish is for a more democratic system where people have more choice over Government decisions and taxes!


Here's a "fish" which in my opinion deserves attention: the Accountancy profession. They were on audit watch whilst the risky assets were allowed to be used for real valuations without the correct risk being applied. This went to the heart of CDO's, etc.

But also more locally such as how they missed the AngloIrish 2billion movements but also how banks do not mark-to-market their so-called assets.

I remember I had a conversation with an accountant years ago about the real value of some of the assets of a company as they were straightlining them over 7 years depreciation, etc. I was questioning the lack of realism and his response that if books were realistic to reflect actual realisable assets companies would lose billions in value overnight. He called that madness, but living on paper values is madness, isnt it?

There are more fish .... enjoy the fishing!

My main issue with the tax is the negative differentiation it creates between European countries. Yeah 10Euro is small...but it's looks like a small minded gotcha tax from a country that still has a lot to prove and has lost a lot of credibility of late.

The amount of 10Euro is small fish. The big fish is where the message conveyed is disingenious and mean minded like everything else this Government does when it's cornered.

I'm sure John O'Donoghue didn't have to pay the 10 euro flight tax when he took the government jet for a 6 day trip to Cannes with his wife.