Someone asked me recently to confirm my assertion - made few months back on TV 3 programme - that a 100% tax on wealth of the Irish members of the Sunday Times Rich List 2009 will last this Government, oh, well, under 5 months.

After actually computing the total ROI-based wealth from the List and taking some adjustments, Table below shows clearly the break down of such a (extremely foolish) tax. Of course, this is a fantasy land, but it does highlight for me the idiocy of our Left wing fanatics. 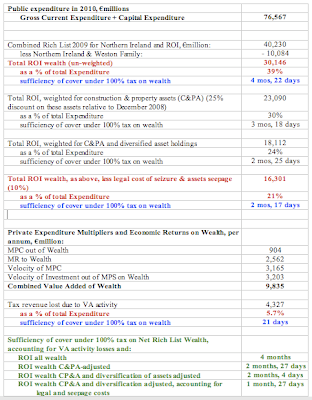 As you can see, a brutish calculation puts the net take from such an exercise at a maximum of €30bn one-shot gain for the Exchequer - or an equivalent of 4 months and 22 days of Government spending (I was pretty much on target in my original statement).

Factoring in the fact that large chunk of this wealth is held by property investors and construction firms owners, whose wealth has been evaporating since December 2008 when the list was compiled and that the list reflects their wealth as assessed on last filed accounts (2007 or earlier), and taking into account that any half-sane person would diversify her holdings geographically, putting a share of her assets out of reach of the Irish Exchequer, this figure drops to €18bn, or 2 months 25 days worth of Government spending planned for 2010.

Taking into account legal costs and assets seepage during the process of collection, the entire Irish Top Rich List 2009 wealth, if it were seized by the Government, would last our Exchequer no more than 2 months and 17 days.

But, one has to take into the account the facts that:
all of which will be foregone if the Exchequer were to seize this wealth in one swoop.

When these factors are accounted for, the Exchequer will be covered for only 1 month and 27 days by the 100% levy on all wealth of the ROI Top Rich List 2009.

What a pack of morons represent economic arguments of the Left of this country!
Posted by TrueEconomics at 8:02 AM