Mountain air and thunderstorms are conducive to light reading, so I was wading through an interesting and sweetly short ECB paper from May 2009, titled “Euro Area Private Consumption: Is There a Role for Housing Wealth Effects”.
The paper looks at a number of Eurozone countries – excluding the wonderland of Ireland (so it provides conservative estimates for the wealth effects) – to find that the marginal propensity to consume out of financial wealth (MPCF) in the Eurozone ranged between 2.4% and 3.6% on the aggregate. The MPC out of nominal housing wealth lies between 0.7 and 0.9%.
Re-parameterizing the model for the case of Ireland,

The above figure does not account for the fact that in most cases our debt levels used to finance financial and housing wealth acquisitions were not diminished over the last two years. Factoring this in, net decline in consumption expenditure should be around 1.7-2.6% in permanent terms.

This goes some ways to highlight the fact that this economy is not running a tax-shortfall-driven deficit on public accounts – we are now increasing public consumption amidst permanently shrunken private consumption. Given that Ireland’s net current Government expenditure is projected (by the DofF) to rise 17.64% between 2009 and 2013 (from €46.365bn to €54.546bn) while the expected cumulative loss in private consumption is expected to total 8.8-13.7%, the wedge between private and public consumption growth in the crisis years is likely to be around 17.5-22.5% of private consumption. And that is before tax increases and future bonds financing burdens are factored in. In other words, tax us some more and we will withdraw all unnecessary consumption from this economy. If we were a land-locked Luxembourg, I doubt there will be many non-public service workers still living in Ireland after that.

And per the latest wholesale price indices release from CSO, here are few charts.

First, exporting vs home sales prices – a clear return to the previous trend of widening gap. Exporters are still suffering while domestic sectors are running improving pricing conditions. A brief period of convergence in November 2008 – January 2009 has now been firmly replaced by a renewed bout of falling export prices and rising domestic ones. Unfortunately, CSO is not providing actual raw data on these series this time around, so no more analysis is possible for now. 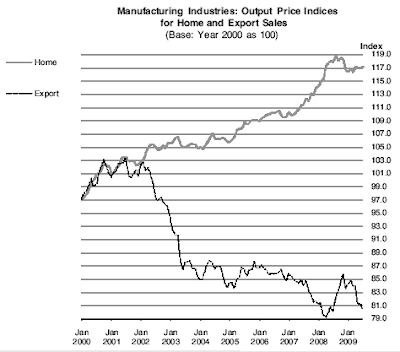 Second chart is dealing with manufacturing prices and growth rates (yoy and mom). Deflation continues here and has accelerated in July relative to June. Month-on-month changes are really telling the story – June improvement is still visible, but is being erased. Note monthly range for July 2008-July 2009 being negatively sloped, as contrasted with July 2007-July 2008. 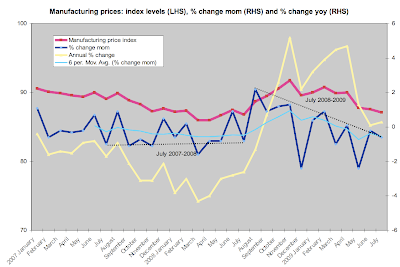 Plotting monthly indices by year shows that seasonality is not as important here and that 2009 is pretty much all about traveling down a steep deflation curve that started in November 2008. 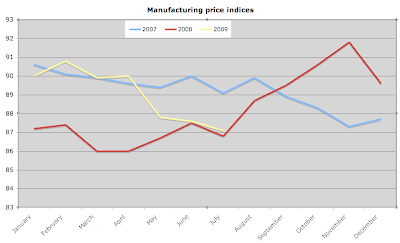