Brian Lucey has an open petition on NAMA on his site (here):
http://brianmlucey.googlepages.com/namapetitionandoireachtasemails
which is, in my view, spot on in terms of what each member of Oireachtas should read before the NAMA debate takes place.


Before we begin with CSO's data on industrial production - few NAMA posters are posted below, so do make sure you get to the end of this post...


CSO data on industrial production was published earlier today. Trumpets are blowing that things are turning around for Ireland Inc. But hold your horses...

On an annual basis production for Manufacturing Industries for June 2009 was 4.3% higher than in June 2008. So turnaround is here, then? Well, no... The most significant changes were in:
What does the above mean? Pharma guys are chugging along in transfer pricing / tax optimization, but computers and electronics - hammered by exits and layoffs and the collapse in private investment worldwide - can't even master a tax optimization scheme. I mean, Table 3 in CSO release clearly shows this sector having suffered the greatest layoffs of all other sectors in proportional terms, and of all other Modern sectors in absolute and proportional terms.

The seasonally adjusted volume of industrial production for Manufacturing Industries for the three month period April to June 2009 was 2.0% lower than in the preceding three month period. This is volatile stuff, so 3-mo aggregates are a bit more telling.

The “Modern” Sector, comprising a number of high-technology and chemical sectors, showed an annual increase in production for June 2009 of 16.0% - the same transfer pricing argument holds. But there was a decrease of 16.6% in the “Traditional” Sector.

The seasonally adjusted industrial turnover index for Manufacturing Industries was 1.9% lower in the three month period April to June 2009 when compared with the preceding three month period. Now, outside the current crisis, turnover is actually less volatile than production volumes, and yet now it tracks almost 1:1 the more volatile series. What's going on? I am not sure, but one potential explanation is that we have gone into a severe enough jobs/production capacity cutting mode earlier this year to allow for some stabilization during May-August period. Of course, this means September-October turnover will make or break our stabilization. If turnover falls, new layoffs will be coming. If it rises, well, if it rises by a hell of a lot, then hiring might commence.

On an annual basis turnover was 0.6% lower when compared with June 2008. 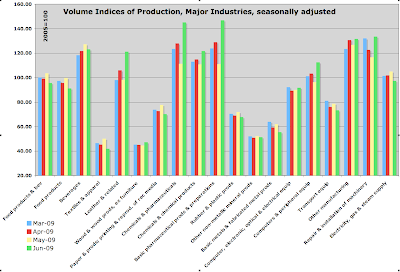 Taking a closer look above, compare the changes over the last four months reported relative to sector activity in 2005 (the 100 line):
In effect, the whole manufacturing sector is sick and the disease is not new to this crisis. Read through this chart above - it is really, really telling. The same chart with monthly changes May-June (preliminary results, of course for June) - 11 sectors show no improvement, 9 show improvement. 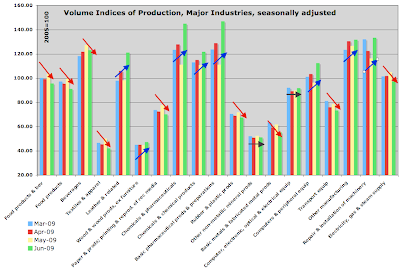 Now step back for a bit of a broader view: 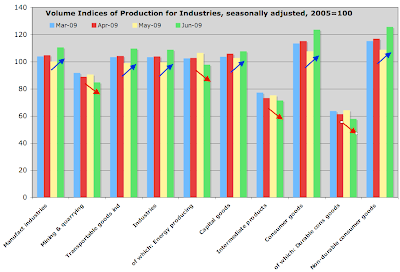 Self-explanatory, but few notes worth making:
Unfortunately, CSO can't get their act together on surveying new orders for all sectors, so we have a snapshot of what's happening in the very limited number of areas. But what the chart below really shows us is our dependence on MNCs - yeah, those American (and other countries') companies who are still trading, if only because of our tax arbitrage opportunity... 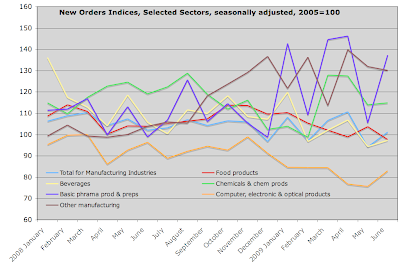 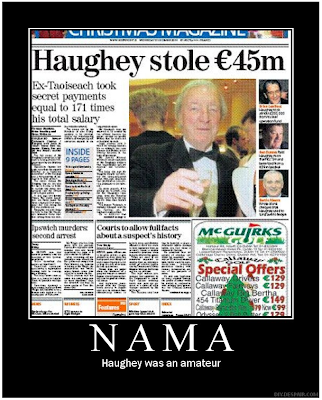 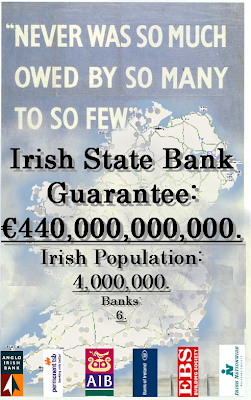 Posted by TrueEconomics at 9:28 PM

Why should I trust Brian Lucey's opinion? Alan Ahearne was a major critic of the housing bubble. On the other hand I read that Brian Lucey got it completely wrong:

Even I knew there was an unsustainable housing bubble just by looking around and listening to the rubbish people were talking.

Well, HF, you might keep an open mind because of the following reasons:
1) Brian is correct in saying that economics is a social science and errors are often made in forecasting or predicting;
2) Brian is finance specialist, not property markets economist, so his error margin on property can be wider;
3) Because Brian have made a mistake before, this does not in any way invalidate his analysis today. Only a consistent record of making errors in ones' core areas of expertise would imply incompetence - DofF and CB being two examples of such. Bur Brian does not have a record of errors, just one, also committed by the majority of our economists;
4) I personally would have never predicted the speed and the power the property collapse here, although I saw signs of a bubble;
5) You should read the petition on his site and judge whether it is something you share with Brian - regardless of whether he made past mistakes or not;
6) And lastly, unlike Mr Ahearne, Brian is not being paid to play any particular tune on policy. This does not invalidate what Ahearne has to say (the lack of basic understanding of economics he exhibits does this for him), but it most certainly makes Brian's case at the very least worthy of consideration.

Arguing about the cause of the property bubble and other issues surrounding how NAMA came about is a bit pointless. It will be a disaster because of HOW it is set up. While there is a case (albeit a poor one) for the Government to intervene regarding toxic debt (like the RTC in the 1990s in the US), NAMA is nothing like it. This will turn what could have been a temporary economic collapse in Ireland into a long drawn out episode that could last for years.

I love the images. It isn't really a question of 'trusting' Brian Lucey's or Dr. Gurdgiev's opinion - it's a question of the empirical evidence. That there was a housing bubble - worldwide - had been pointed out by the Economist newspaper years ago. Just because that bubble didn't collapse on a given day in a given week in a given month in a given year does not mean that the assertion that there was a bubble at that time was invalid. It's all a question of timing. Most sane people in the economics profession knew that there was a huge misallocation of resources in Ireland post 2000 into property. They blamed, correctly, planning and the fact that the country's small open status allowed for huge volatility in demand for housing. What many missed was that money was historically cheap. So here's a non-property related prediction. Money now has never been - in our history - cheaper. Government taxes have taken all of the benefits of this from consumers (funny how ECB policy to help the economy is turned here into a policy to help the government). When interest rates rise then many people in Ireland will drown in poor finances - thanks to a government that is spending public money on advising people on how to deal with debt.

James, I agree with your view - no surprise there for those who know your views and my own. Iceland's default has now resulted in a significant devaluation, re-alignment of spending priorities (gone are grandiose state plans for whale-singing opera house and Icelandic Salmon Bone Carving Museum), fall-off in wages to the, de facto overpaid average workforce. The deflation of the ego bubble was good - Iceland now faces much more robust growth prospects and more stable financial situation - so much so that the IMF has upgraded long-term growth forecasts for its economy.

Contrast this with Ireland: we are still spending like drunken sailors on such 'necessities' as Aer Lingus dual language announcements and Eamon O Cuiv salary, flights for our Sports & Culture Tsars to international exhibitions where they can stare on modern art like they've never seen it before (which they never did) and so on. We still have the Government that is penning in the Western Rail Corridor northern link to Sligo - a road to nowhere passing through the middle of nowhere. And, of course, we have trade unions insisting that the rest of economy can go to hell, as long as we continue paying their members huge wages out of line with any other country on earth and we underpin private sectors' inability to lay off unionised workers by setting excessively high minimum wages, social welfare benefits (for, yes - the higher the benefits and the minimum wage, the lower are the gains from replacing the driftwood from the union shop with younger and more ambitious employees and the higher are the social costs of such efficiency replacement).

Yes, Alice in Wonderland of modern economics - aka Ireland - continues to drag itself through crisis as if nothing has happened in the real world, as if nothing needs to be done to rescue ourselves out of this self-inflicted mess.

NAMA, therefore, is just another sign of our own denial of the perilous state of our country. All we need to crash through the next lower floor into the real basement is, as Paul points out - a simple rise of interest rates.

Paul phrased the predicament very well. As I noted in a previous post, I kept my interest repayments at the highest level once rates started to fall. It seemed I would be able to pay off the mortgage that little bit quicker. Then Clowen and co. started increasing taxes, and I had to reduce my over-payments.
What that says to mean is that a lot of people living on reduced incomes or the dole will be in serious trouble once interest rates head north. The government has left us with no room to maneuver.
Dr. G: Keep up the good work in highlighting this NAMA fiasco.