The number of people unemployed increased by 246,000 in June relative to May. This is much slower than the gain of 646,000 recorded in March, but it nonetheless a continued increase. 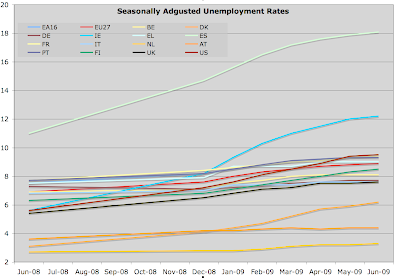 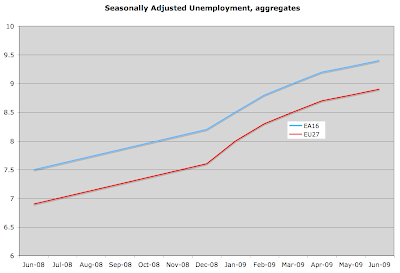 So see if you can spot the 'green shoots' or bottoming out in unemployment that the EU has been talking about on the back of the latest figures (chart above). No flattening in the rate of increase since April 2009 moderation on March disastrous figures... 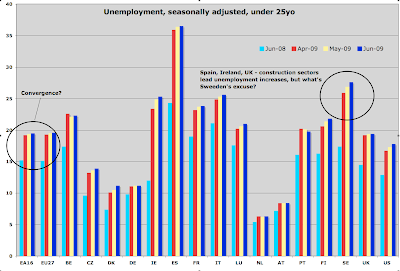 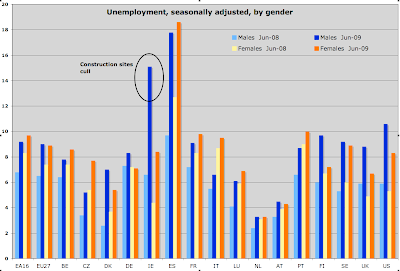 The above tow charts are rather telling as well.

Posted by TrueEconomics at 3:10 PM

Irelands rapidly deteriorating unemployment record supports the claim that the most vulnerable in our society will be asked to bail out the developer.
Given the symbiotic relationship between Fianna Fail and the developer, it is hardly surprising, in fact it is inevitable that the snouts which were fed by Fianna Fail during the good times will have an instinctive expectation of similar support again.
Weaning away from such dependency can only be achieved by a change of Government

You know, this weaning away process should have started about 9 years ago when the real value of Ireland's productivity was being eroded rapidly by rising input costs. I think Ireland's "real" unemployment grew rapidly from about 1999 onwards as we started to loose hi-tech jobs - but the effects were muted by the lowering interest rates and hoovering up of lower skilled into construction. Result? We got richer, but more stupid. We are now suffering the double whammy of a rapid construction contraction with no cushion of a built up hi-tech/manufacturing sector we simply let go. I make the bold claim that we are not just suffering from unemployment, but also a from a lack of discerning intellectual critical mass which has allowed the current mess. Said intellectual content may have been more apparent had our hi-tech been seen as of greater importance.

What is the 'long term economic value' of a €60 Billion investment in Silicon Valley venture capital companies?