Throughout recent years, the recovery meme, played across the mainstream media in the U.S. has provided endless support to President Obama’s approval ratings. During POTUS 2016 election, the said meme was used by Hillary Clinton to challenge the ‘things aren’t so great in America’ views of Bernie Sanders and, subsequently, the echoes of the same from Donald Trump. Since the election, the recovery story has been billed as the ‘strong economy’ legacy that President Obama will be leaving for his predecessor to mess with - the basis for setting up the incoming Trump Administration for any potential fall, should economic fortunes of the recovery were to falter.

The central point of the U.S. recovery story - absent any appreciable growth in productivity, capital investment, and sectoral value added - was the only bright spot on the U.S. economic horizon: the labour markets. In fact, the U.S. headline unemployment figures have shown very strong gains, and jobs creation has been robust, with more recent data showing improvements (at long last) in households’ incomes. All of these indicators can and have been robustly challenged in terms of the extent to which they show true nature of improvements. However, they have been taken, predominantly, as read. Improvements are improvements, and gains are gains.

And as the readers of my blog and media articles would have known, the story is never complete, if one looks only at headline figures. Reality is always more complex.

Take a look at the following chart based on data from the St Louis Federal Reserve database, Fred: 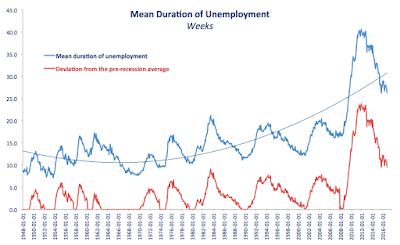 Yes, duration of unemployment peaked in January 2011 at 40.7 weeks and since then fallen to 26.3 weeks (as of November 2016), but 26.3 weeks for average unemployment benefits duration is still above any previous recession since 1948 on.

Now, as er return to normalcy. During 1990-1991 and 2001 recessions, recovery failed to completely reduce average duration of unemployment back to pre-recessionary norms. In simple terms, after the end of recession, in 1990-1991 and 2001 downturns, on average, unemployed people remained in unemployment longer than before recessions. These were the first two recession on record that resulted in this change in structural unemployment duration. 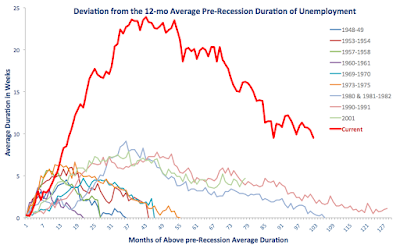 Again, current (since 2008) recovery is clearly the worst for all post-recessionary episodes on record. Currently, duration of unemployment is 9.5 weeks, on average, longer than it was during the last 12 months of pre-2008 recession. Which is bad enough to be worse than the peak deviation for any recession in modern history.

What is happening here? The fabled U.S. jobs creation recovery is really a combination of several factors. One of these is genuine increases in jobs being created, which drives unemployment down. Another is demographic: U.S. labour force is expanding, and as it does, employment creation get swallowed by new entrants into labour force, while many existent unemployed are either exiting the labour force, or remaining on unemployment benefits longer. Of course, putting younger workers to work is a good thing. But squeezing older unemployed out of workforce is not.

Which makes you pause and think: is the legacy of the Obama administration on jobs is that impressive? Really? Well, stay tuned for more...

Posted by TrueEconomics at 2:16 PM