The latest Edelman Trust Barometer for 2017 shows comprehensive collapse in trust around the world in 4 key institutions of any society: the Government (aka, the State), the NGOs (including international organizations), the Media (predominantly, the so-called mainstream media, or established print, TV and radio networks) and the Businesses (heavily dominated by the multinational and larger private and public corporates).

Here are 8 key slides containing Edelman's own insights and my analysis of these.

Let's start with the trend: 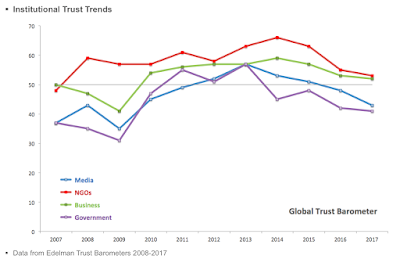 In simple terms, world-wide, both trust in Governments and trust in Media are co-trending and are now below the 50 percent public approval levels. For the media, the wide-spread scepticism over the media institutions capacity to deliver on its core trust-related objectives is now below 50 percent for the second year in a row. even at its peak, media managed to command sub-60 percent trust support from the general public, globally. This coincided with the peak for the Governments' trust ratings back in 2013. Four years in a row now, Governments enjoy trust ratings sub-50 percent and in 2017, mistrust in Governments rose, despite the evidence in favour of the on-going global economic recovery.

In 2017, compared to 2015-2016, Media experienced a wholesale collapse in trust ratings. In only three countries of all surveyed by Edelman did trust in media improve: Sweden, Turkey and the U.S. Ironically, the data covering full 2016, does not yet fully reflect the impact of the U.S. Presidential election, during which trust in media (especially the mainstream media) has suffered a series of heavy blows. 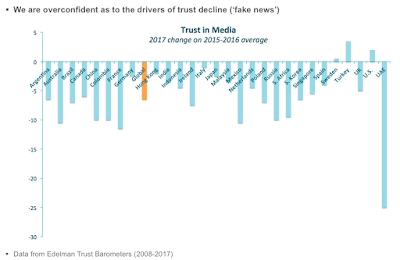 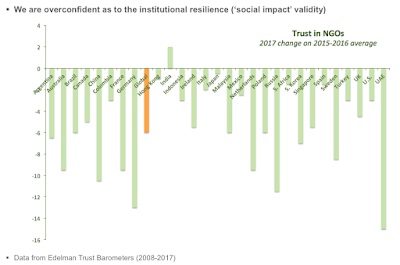 Of 29 countries surveyed by Edelman, 21 had trust in NGOs in excess of 50 percent in 2017, down from 23 in 2016. Although overall levels of trust in NGOs remains much higher than that for the Media institutions, the trend is for declining trust in NGOs since 2014 and this trend remans on track in 2017 data. 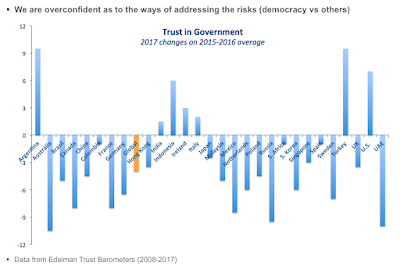 Based on Edelman analysis, the gap between 'experts' (or informed public) view of institutions and that of the wider population is growing. 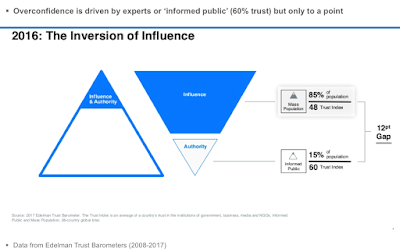 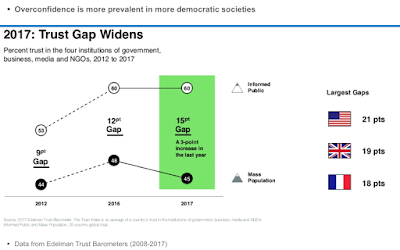 And as the above slide from Edelman presentation shows, the gap between informed and general public is substantively the same in culturally (and institutionally) different countries, e.g. the U.S., UK and France. All three countries lead the sample by the size of the differences between their informed public trust in institutions and the general public trust. All of these countries have well-established, historically stable institutions and robust checks and balances underpinning their democracies. Yet, the elites (including intellectual elites) detachment from general public is not only massive, but growing.

These trends are also present in other countries: 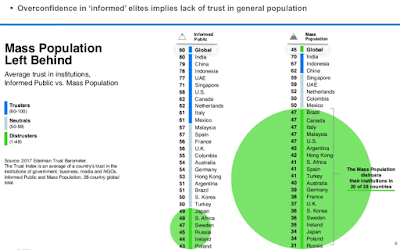 As Edelman researchers conclude: the public in general is now driven to reject the status quo. 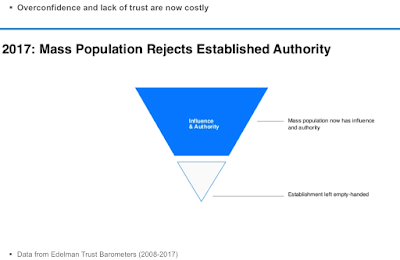 All of the above suggests that political opportunism, ideological populism and rising nationalism are neither new phenomena, nor un-reflected in historical data, nor fleeting. Instead, we are witnessing organic decline in trust of the institutions that continue to sustain the status quo.

Posted by TrueEconomics at 7:58 PM