11/1/17: Mr. Trump's Plan for Addressing Conflicts of Interest is a Fig Leaf of Corporate Governance

Why PEOTUS Donal Trump’s plan to donate hotels profits earned from foreign government payments to the U.S. Treasury is a fig leaf of corporate governance measures? 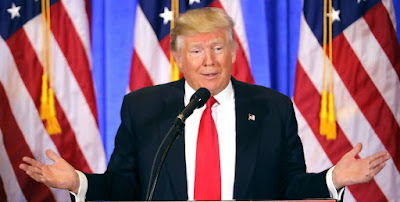 There are several reasons why a commitment to donate profits arising from foreign governments' payments to his hotels will not reduce, nor even alleviate, business incentives for potential conflict of interest that may arise in the future.

Firstly, donating profits from such activities requires that profits are declared on these activities in the first place. Since profits are declared across the entire business, not on the basis of individual transactions, Mr. Trump can use full extent of tax laws and accounting procedures, including cumulated losses deductions and tax shields on investment, to effectively reduce such denotable profits to nil over the next 4-8 years.

Secondly, profits are not the most important financial line on which Mr. Trump operates. Mr. Trump operates on the basis of business (net) worth (value of his business) which reflects not so much the declared profits, but rather the earnings generated by his businesses (cash flow basis, e.g. EBITDA) and also reflects earnings over the longer term time horizon (timing factor).

Now, consider the following hypothetical scenario: suppose Mr. Trump’s hotels receive USD1 million in foreign government’s bookings in 2017. Suppose he earns 10 percent profit margin on these earnings (so we neglect the issue raised in the first argument above). The profit is declared and Mr. Trump donates USD100K to the U.S. Treasury in 2017. The problem is that the 10% profit margin is across the entire group of hotels, not across the individual rooms and services supplied in exchange for the USD1 million foreign Governments' payments. As the result, 10% margin reflects costs and investments undertaken by the whole group. Foreign earnings, therefore, can be used to fund internal investment activities, ammortization and capital replacement costs, hiring costs, new services deployments etc. All of which will increase the value of Mr. Trump's hotels, including hotels that did not collect foreign payments.

In the mean time, Mr. Trump's business earnings did increase in 2017 by USD1 million as the result of the assumed foreign governments' payments. If this increase is viewed as organic or permanent, rather than a one-off windfall, his business value will increase as the result of these 2017 earnings even independent of the aforementioned investment. Why? Because companies are valued on the basis of their cash flow. Not on the basis of declared profits.

Furthermore, foreign governments' paid earnings will increase Mr. Triump's businesses capacity to borrow and raise equity. These increased borrowings and equity raises can further be used to invest in new business capital. This too will enhance business valuations for Mr. Trump.

In simple terms, even after donating his profits, Mr. Trump will be able to still gain substantially from increased revenues paid for by foreign governments.

Thirdly, there is a host of other implications relating to Mr. Trump’s plan.

In simple terms, Mr. Trump’s plan to prevent conflicts of interest arising does not add up to reducing incentives for conflict of interest. It is a fig leaf of corporate governance.

Posted by TrueEconomics at 1:55 AM