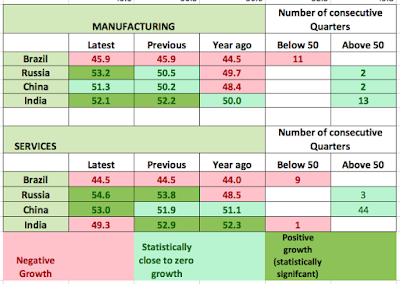 Brazil Services PMI for 4Q 2016 came in at 44.5, unchanged on 3Q 2016 and marking rapid rate of contraction in the country’s Services economy. This is 9th consecutive quarter of sub-50 readings, and 12th consecutive quarter of PMI readings statistically at or below 50.0 mark. Services recession continues to be worse than Manufacturing recession for the seventh quarter in a row.

Russian Services PMI ended 2016 with a bang. 4Q 2016 reading averaged 54.6, up on 3Q reading of 53.8. FY 2016 average is solid 52.9, which is a big contrast to 48.5 FY average for 2015. This is the strongest rate of quarterly average growth since 1Q 2013. Overall, dynamics in the Services sector support the view that Russian Services economy has now moved solidly out of the recession and into broad expansion. To translate this into overall economic outlook for growth, however, we need at least one (preferably two) quarters of above 52 readings in Manufacturing.

India Services posted a surprising rapid contraction, falling for 4Q 2016 to 49.3 from 52.9 average for 3Q 2016. This marks the first sub-50 reading since 2Q 2015 and is hard to interpret as anything but a volatility induced by monetary reforms and a couple of other policy blunders. Still, 2016 FY average for the sector is at 51.8 which is virtually unchanged compared to 51.7 average for FY 2015.

Looking at the trends: 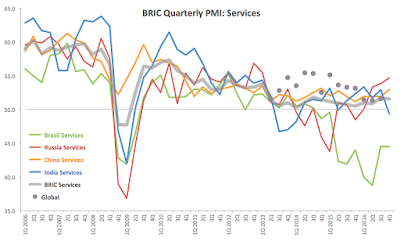 1) Russian rate of Services sector growth is now on par with pre-crisis period (2013 and earlier). China is taking second place in terms of Services growth momentum, albeit its expansion is both weaker than Russian, and sustained by superficial means (monetary and fiscal stimuli - not present in Russia).

2) India is on a sharp volatility down, which needs to be confirmed if we are to talk about general weaknesses in the economy.

3) Brazil remains the sickest of all BRICS, confirming the same positioning in country Manufacturing.

4) Again, tracing out longer term trends, Russian general slowdown set on around 2Q 2013 in Services has now been broken to the upside. While Chinese Services continue to trend along shallow growth line, and India’s trend (highly volatile) is suggesting some weaknesses in growth. Brazil’s Services weaknesses (turned decline in 4Q 2014) that started around 4Q 2012 - 1Q 2013 is still pronounced.

Posted by TrueEconomics at 5:02 AM