The golden VC model of finance is getting hammered by the lack of IPOs. Let’s take it from the top. majority of VCs fund companies on the basis of a visible exit (at least strategic visibility), which in the vast majority of cases implies either a sale (M&A by a bigger fish) or an IPO. Rarely do they explicitly factor into company valuations a possibility of a buy-out (for if they did, their models of funding would involve debt, rather than equity) or even less frequently, a possibility of earning a return through organic growth (for if they did, their models will set RRR closer to 5-10 percent pa over a longer time horizon, not quintuple that over a short run). So VC ‘industry’ by and large depends on IPOs. And these IPOs are now exceedingly rare on the ground and their valuations are exceedingly shallower. 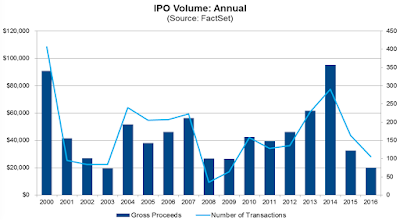 1) “The number of companies going public on United States exchanges amounted to 33 in the fourth quarter, which represented a 6.5% uptick from the year-ago quarter (31 IPOs), but a 5.7% decline from Q3 (35 IPOs).” Aha, you say, a silver lining! Not quite so. “Despite the increase, this number was still well-below the average fourth quarter IPO count going back to 2000 (47 IPOs).“ And worse: “On an annual basis, there were 106 companies that went public on U.S. exchanges in 2016, which was a 35.4% downtick from 2015 (164 IPOs). The number of initial public offerings in 2016 marked the lowest annual count since 2009, when the number was 64.” 2009?! Wasn’t that the year when the world was crumbling to bits around us? Yes. And 2016? wasn’t this the year when Obamanomics celebrated miracles of labour markets recovery and stock markets indices heading for all time highs? Yes. So something is rotten somewhere, right?

2) Yes, things are rotten. “Gross proceeds (including over-allotment) amounted to $7.1 billion in the fourth quarter, which was a 7.3% decrease year-over-year. On an annual basis, gross proceeds in 2016 represented the smallest total since 2003.” 2003? Was that not the year after the dot.com crash when the investors were still shying away from tech and general start ups? Yes. Which means something is really rotten. 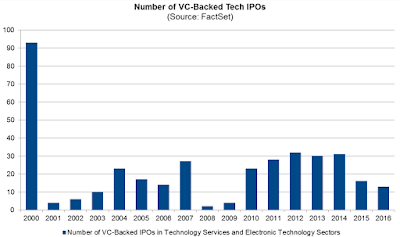 
5) Like it or not, VCs are now being forced to wait longer for IPO exits: 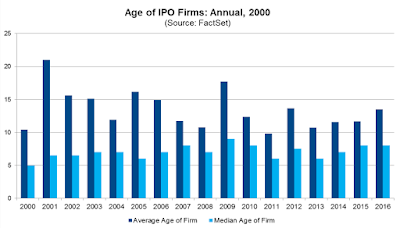 So things are looking pretty barren for traditional VCs. Which might be a matter of a cyclical swing or a structural trend. Either way, the glamor of Series A-Z unicorns is not exactly shining on the proverbial hill.

Posted by TrueEconomics at 11:32 PM