Some years ago, I have shown that Irish measures of economic activity - when collected at sectoral levels - have virtually nothing in common with Irish GDP and GNP. Given recent revisions to economic growth and the National Accounts, including the absurd levels of notional GDP and GNP growth recorded in 2015 and in parts of 2016, it is worth to revisit the same issue.

So here is the data: the best advanced indicator data on Irish economic activity that we have is the set of Purchasing Managers Indices (PMIs) released by Markit for three key sectors of the economy: Construction, Manufacturing and Services. Markit are doing pretty much an honest job surveying companies to determine if they are experiencing uptick or decline in their activities. And they are doing this every month. Yes, there are issues with data quality due to what appears to be a strong pro-MNCs bias in the surveys. And yes, Markit are refusing to fully investigate the matter and to test data formally for such biases. And yes, Markit are still not willing to share with me their data, including the actual final data set of PMIs (I have to collect these manually, every month).

But, for all the above problems, Markit is the only source of leading economic indicators for Ireland. 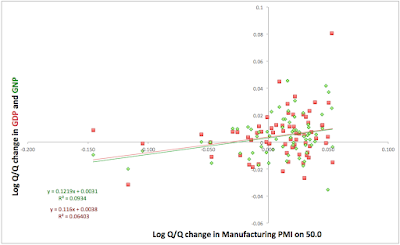 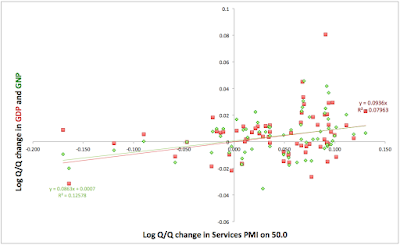 Why are both sectors signals come out utterly useless when it comes to signalling growth in either GDP or GNP? We have no idea. But my speculative view is that in reality, even large MNCs can’t organically establish their own ‘contributions’ to Irish GDP because whilst purchasing managers and related executives on operations side might know what their divisions are doing and how much more or less business they are handling, the same managers have no idea what value in the end will be attached to their divisions work by the finance lads on the Mother Ship. In other words, real operations managers have no clue how much their companies are booking in revenues or profits because these revenues and profits have only tangential connection of Irish operations. Tax arbitrage is such a naughty thingy, you see, when it comes to collecting data.

Not that Markit (or a vast array of Irish stuff brokers so keen on using its data to ‘interpret’ ‘buy everything’ signals for Irish assets) mind… Gwan, ya beaut... buy some stocks, will ya?

Posted by TrueEconomics at 4:25 AM