In their 2003 paper, Koehler and Gershoff provide a definition of a specific behavioural phenomenon, known as betrayal aversion. Specifically, the authors state that “A form of betrayal occurs when agents of protection cause the very harm that they are entrusted to guard against. Examples include the military leader who commits treason and the exploding automobile air bag.” The duo showed - across five studies - that people respond differently “to criminal betrayals, safety product betrayals, and the risk of future betrayal by safety products” depending on who acts as an agent of betrayal. Specifically, the authors “found that people reacted more strongly (in terms of punishment assigned and negative emotions felt) to acts of betrayal than to identical bad acts that do not violate a duty or promise to protect. We also found that, when faced with a choice among pairs of safety devices (air
bags, smoke alarms, and vaccines), most people preferred inferior options (in terms of risk exposure) to options that included a slim (0.01%) risk of betrayal. However, when the betrayal risk was replaced by an equivalent non-betrayal risk, the choice pattern was reversed. Apparently, people are willing to incur greater risks of the very harm they seek protection from to avoid the mere possibility of betrayal.”

Put into different context, we opt for suboptimal degree of protection against harm in order to avoid being betrayed.

Now, consider the case of political betrayal. Suppose voters vest their trust in a candidate for office on the basis of the candidate’s claims (call these policy platform, for example) to deliver protection of the voters’ interests. One, the relationship between the voters and the candidate is emotionally-framed (this is important). Two, the relationship of trust induces the acute feeling of betrayal if the candidate does not deliver on his/her promises. Three, past experience of betrayal, quite rationally, induces betrayal aversion: in the next round of voting, voters will prefer a candidate who offers less in terms of his/her platform feasibility (aka: the candidate less equipped or qualified to run the office).

In other words, betrayal aversion will drive voters to prefer a poorer quality candidate.

Sounds plausible? Ok. Sounds like something we’ve seen recently? You bet. Let’s go over the above steps in the context of the recent U.S. presidential contest. 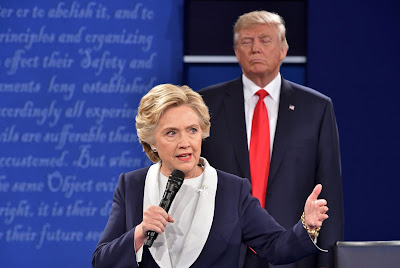 One: emotional basis for selection (vesting trust). The U.S. voters had eight years of ‘hope’ from President Obama. Hope based on emotional context of his campaigns, not on hard delivery of his policies. In fact, the entire U.S. electoral space has become nothing more than a battlefield of carefully orchestrated emotional contests.

Two: an acute feeling of betrayal is clearly afoot in the case of the U.S. electorate. Whether or not the voters today blame Mr. Obama for their feeling of betrayal, or they blame the proverbial Washington ’swamp’ that includes the entire lot of elected politicians (including Mrs. Clinton and others) is immaterial. What is material is that many voters do feel betrayed by the elites (both the Burn effect and the Trump campaign were based on capturing this sentiment).

Three: of the two candidates that did capture the minds of swing voters and marginalised voters (the types of voters who matter in election outrun in the end) were both campaigning on razor-thin policies proposals and more on general sentiment basis. Whether you consider these platforms feasible or not, they were not articulated with the same degree of precision and competency as, say, Mrs Clinton’s highly elaborate platform.

Which means the election of Mr Trump fits (from pre-conditions through to outcome) the pattern of betrayal aversion phenomena: fleeing the chance of being betrayed by the agent they trust, American voters opted for a populist, less competent (in traditional Washington’s sense) choice.

Now, enter two brainiacs from Harvard. Rafael Di Tella and Julio Rotemberg were quick on their feet recognising the above emergence of betrayal avoidance or aversion in voting decisions. In their December 2016 NBER paper, linked below, the authors argue that voters preference for populism is the form of “rejection of “disloyal” leaders.” To do this, the authors add an “assumption that people are worse off when they experience low income as a result of leader betrayal”, than when such a loss of income “is the result of bad luck”. In other words, they explicitly assume betrayal aversion in their model of a simple voter choice. The end result is that their model “yields a [voter] preference for incompetent leaders. These deliver worse material outcomes in general, but they reduce the feelings of betrayal during bad times.”

More to the point, just as I narrated the logical empirical hypothesis (steps one through three) above, Di Tella and Rotemberg “find some evidence consistent with our model in a survey carried out on the eve of the recent U.S. presidential election. Priming survey participants with questions about the importance of competence in policymaking usually reduced their support for the candidate who was perceived as less competent; this effect was reversed for rural, and less educated white, survey participants.”

Here you have it: classical behavioural bias of betrayal aversion explains why Mrs Clinton simply could not connect with the swing or marginalised voters. It wasn’t hope that they sought, but avoidance of putting hope/trust in someone like her. Done. Not ‘deplorables’ but those betrayed in the past have swung the vote in favour of a populist, not because he emotionally won their trust, but because he was the less competent of the two standing candidates.

Di Tella, Rafael and Rotemberg, Julio J., Populism and the Return of the 'Paranoid Style': Some Evidence and a Simple Model of Demand for Incompetence as Insurance Against Elite Betrayal (December 2016). NBER Working Paper No. w22975: https://ssrn.com/abstract=2890079
Posted by TrueEconomics at 8:02 AM