The fact that the world is awash with debt is hard to dispute (see data here and here), but it is quite commonly argued that the aggressive re-leveraging happening in the corporate and household sectors runs contrary to the austerity trends in the public debt segment of the total economic debt. The paradox of the austerity arguments is, of course, that whilst debt is rising, public investment is falling and public consumption remains either stagnant of rising slowly. This should see public debt either declining or remaining static. Of course, banks bailouts in a number of advanced economies would have resulted in an uplift in public debt during the early years of the Global Financial Crisis and the Great Recession, but these years behind us, we should have witnessed the austerity translating into moderating debt levels in the global economy when it comes to public debt.

Alas, this is not the case, as illustrated in the chart below: 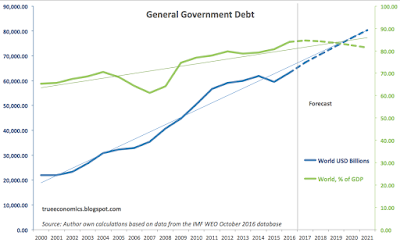 As the above chart shows, globally, total volume of Government debt was estimated to be USD63.2 trillion at the end of 2016, up USD6.46 trillion on the end of 2011. That is almost 84.1% of the world GDP today, as opposed to 78% of GDP at the end of 2011. More than half of this increase (USD3.91 trillion) came from the Emerging and Developing Economies, and USD2.3 trillion came from G7 economies. Meanwhile, euro area Government Debt levels declined USD815 billion, all of which was due solely to changes in the exchange rate and the rollover of some debt into multinational organisations' (e.g. ESM) and quasi-governmental (e.g. promissory notes) debt. Worse, over the said period of time, only one euro area country saw reduction in the levels of debt: Greece (down EUR34.46 billion due to restructuring of debt). In fact, in Euro terms, total euro area government debt rose some EUR1.36 trillion over the span of the 2011-2016 period.

So may be, just may be, the real economy woe is that most of the new debt accumulated by the Governments in recent years has flown into waste (supporting banks, financial markets valuations, doling out subsidies to politically favoured sectors etc), instead of going to fund productive public investments, including education, skills training, apprenticeships and so on. Who knows?..

Posted by TrueEconomics at 12:13 AM