The issue of a gender gap in the workplace, relating to gender differences in terms of occupations, is a highly contentious, politically charged and, despite a wealth of research on the subject, not fully explained to-date. One thing that economists generally agree on is that it is not one caused by a single factor or even a confluence of factors stemming from a single origin (e.g. access to education, time taken for maternity leave or concerted discrimination against women in the workplace, or any other set of closely linked factors). Instead, a range of exogenous, endogenous, personal, institutional, social etc factors determine the size of the gap, its existence and its evolution over time.

Hence, any new research identifying new factors is both - confusing (especially to those of us, who would stress the social equality dimension of the labour market outcomes) and important (especially to those of us, who prefer evidence-based policy and institutional responses to the issue). Note: the two sets of ‘us’ identified above are not mutually exclusive. In fact, I would suggest that majority of us - researchers, policymakers, analysts, and generally-speaking people, belong to both groupings, being concerned simultaneously with the social justice dimension of the labor market gender gaps and the need for well-designed policy responses to the problem.

With this preamble, here is a new piece of research on the subject. In their paper, titled “For Love or Money? Gender Differences in How One Approaches Getting a Job”, UC Berkeley researchers, Ng, Weiyi and Leung, Ming D (March 22, 2015: https://ssrn.com/abstract=2583592)note that current theories of the labor markets “conclude that women and men apply to different jobs”. However, these theories fail “to explain differences in how [men and women] may behave when applying to the same job.”

The authors “correct this discrepancy by considering gendered approaches to the hiring process. We propose that applicants can emphasize either the relational or the transactional aspects of the job and that this affects getting hired.”

What do these two approaches mean?

The authors “hypothesize that the approach women take in applying for a job will differ from men. In particular, we believe that women, enacting their gender will focus on the relational aspects of the exchange: they emphasize the social, emotional aspects of the employment relationship and focus on mutually beneficial interests. On the other hand, men will be more transactional in nature: they focus more on the task at hand, their own qualifications and achievements, and highlight the quantifiable, observable and tangible aspects of the job.”

The evidence in support of these hypotheses is presented in the paper (for example, see Chart below). 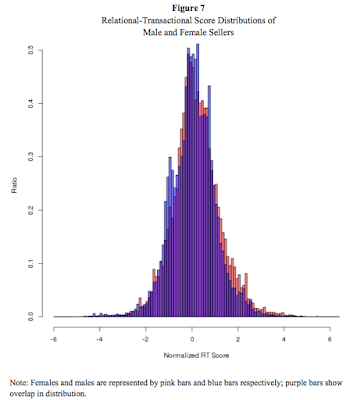 Crucially, the authors note that “while both these approaches have their merits, this difference should result in variation in a person’s likelihood of being hired.”

The study then applies this theoretical hypothesis to see if it can account for “the hiring gap
between male and female job applicants we observe [in the actual data], net of controls for underlying ability, in an online market for contract labor, Elance.com.”


Based on the data and a barrage of econometric tests, the authors concluded that “women are more likely to be hired than men by about 5.2% [in the Elance.com type of the labor market]. Quantitative linguistic analysis on the unstructured text of job proposals reveals that women (men) adopt more relational (transactional) language in their applications. These different approaches affect a job seeker’s likelihood of being hired and attenuate the gender gap we identified.”

Besides own interesting insights and conclusions, the paper is well-worth reading for the quality of discussion it presents relating to existent social and economic literature on the subject of gender gaps. If anything, this discussion itself is worth paying close attention to, for it highlights the wealth of our knowledge on the subject as well as posits some serious questions about the future of gender gap research.

Posted by TrueEconomics at 2:22 AM