4/10/15: Secular Stagnation and the Promise of the Recovery


An unedited version of my recent requested guest contribution for News Max on the issue of secular stagnation (July-August 2015).


Secular Stagnation and the Promise of the Recovery

These stylized facts are absent from the data for the major advanced economies to-date, prompting three distinct responses from the economic growth analysts. On the one hand, there are proponents of two theories of secular stagnation – an idea that structurally, long-term growth in the advanced economies has come to a grinding halt either due to the demand side collapse, or due to the supply side exhausting drivers for growth. On the other hand, the recovery bulls continue to argue that the turnaround reflective of a traditional recovery is likely to materialize sometime soon.

In my opinion, neither one of the three views of the current economic cycle is correct or sufficient in explaining the lack of robust global recovery from the crises of 2007-2009 and 2011-2014. Instead, the complete view of today’s economy should integrate the ongoing secular stagnation thesis spanning both the supply and the demand sides of the global economy.

The end game for investors is that no traditional indexing or asset class approach to constructing investor portfolios will offer a harbor from the post-QE re-pricing of economic fundamentals. Instead, longer-term strategy for addressing these risks calls for investors targeting smaller clusters of opportunities in sectors that can be viewed as buffers against the secular stagnation trends. Along the same lines of reasoning, forward-looking economic policymaking should also focus on enhancing such clustered opportunities.

The demand-based view of secular stagnation suggests that the global growth slowdown is linked to a structural decline in consumption and investment, reflected in a decades-long glut of aggregate savings over investment.

This theory, tracing back to the 1930s suggestion by Alvin Hansen, made its first return to the forefront of macroeconomic thinking back in the 1990s, in the context of Japan. By the early 1990s, Japan was suffering from a demographics-linked excess of savings relative to investment, and the associated massive contraction in labor productivity. During the 1980-1989 period, Japan's real GDP per worker averaged 3.2 percent per annum. Over the following two decades, the average was 0.81 percent. Meanwhile, Japan's investment as a percentage of GDP gradually fell from approximately 29-30 percent in the 1980s to just over 20 percent in 2010-2015.

The Great Recession replicated Japanese experience across the majority of advanced economies. Between 1980 and 2014, the gap between savings and investment as percentage of GDP has widened in North America and the Euro area. At the same time, labor productivity fell precipitously across all major advanced economies, despite a massive increase in unemployment.

Some opponents of the demand side secular stagnation thesis, most notably former Fed Chairman Ben Bernanke, argue that low interest rates create incentives for investment and reduced saving by lowering the cost of the former and increasing the opportunity cost of the latter.

However, this argument bears no connection to what is happening on the ground. Current zero rates policies appear to reinforce the savings-investment mismatch, not weaken it, rendering monetary policy impotent, if not outright damaging.

How can this be the case?

To address the demand-side of secular stagnation in the short run, requires lifting the natural rate of return on investment, without increasing retail interest rates. This will be both tricky for policymakers and painful for a large number of investors, currently crowded into an over-bought debt markets.

The only way real natural rate of return to investment can rise in the environment of continued low policy and retail rates is by widening the margin between equity and debt returns for non-financial assets and reducing tax subsidies awarded to physical and financial capital accumulation. In other words, policymakers must rebalance taxation systems to support real enterprise formation, entrepreneurship and equity investment, while reducing incentives to invest in debt and financial assets.

Good examples of such policy tools deployment can be found in the areas of gas and oil infrastructure LLPs and property REITs used to fund long-term physical capital investments via tax optimized returns structures. Transforming these schemes to broader markets and to cover non-financial, technological and human capital investments, however, will be tricky.

From the investor perspective, the demand-side stagnation thesis implies that  longer-term investment opportunities will be found in allocations targeting entrepreneurs and companies with organic growth that are debt-light, technologically intensive (with a caveat explained below) and human capital-rich. There are no real examples of such companies currently in the major stock markets’ indices. Instead, the future growth plays are found in the high risk space of start ups and early stage development ventures in the sectors that bring technology directly to end-user engagement: biotech, nanotechnology, remote health, food sciences, wearables, bio-human interfaces and artificial intelligence.

The caveat relating to technology investments briefly mentioned above is non-trivial.

Today, we have two distinct trends in technological innovation: technological research that leads to increased substitution of labor with technology and innovations that promise greater complementarity between labor and human capital and the machines.

The first type of innovation is what the financial markets are currently long. And it is also directly linked to the supply-side secular stagnation thesis formulated by Robert Gordon in the late 2000s. The thesis challenges the consensus view that the current technological revolution will continue to fuel a perpetual growth cycle.

Per Gordon, "The frontier established by the U.S. for output per capita, and the U. K. before it, … reached its fastest growth rate in the middle of the 20th century, and has slowed down since.  It is in the process of slowing down further." The reason for this is the exhaustion of economic returns to technological innovation.  Financial returns are yet to follow, but inevitably, with time, they will.

Gordon, and his followers, argue that a sequence of three industrial or technological revolutions explains the historically unprecedented pace of growth recorded since the mid-18th century. "The first with its main inventions between 1750 and 1830 created steam engines, cotton spinning, and railroads. The second was the most important, with its three central inventions of electricity, the internal combustion engine, and running water with indoor plumbing, in the relatively short interval of 1870 to 1900.” However, after 1970 “productivity growth slowed markedly, most plausibly because the main ideas of [the second revolution] had by and large been implemented by then.” Thus, the computer and internet age – the ongoing third revolution – has reached its climax in the late 1990s and the productivity gains from the new computer technologies has been declining since around 2000. 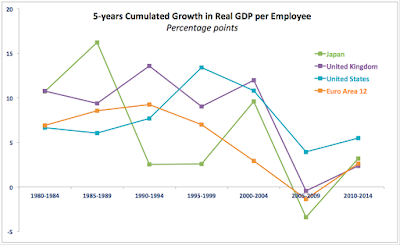 Gordon’s argument is not about the levels of activity generated by the new technologies, but about the declining rate of growth in value added arising form them. This argument is supported by some of the top thinkers in the tech sector, notably the U.S. tech entrepreneur and investor, Peter Thiel.

The older generation of players in the tech sector attempted to challenge Gordon’s ideas, with little success to-date.

A recent study from IBM, titled "Insatiable Innovation: From sporadic to systemic", attempted to show that technological innovation is alive and well, pointing to evolving ‘smart’ tech, globalization of consumer markets, and universal customization of production as signs of potential growth capacity remaining in tech-focused sectors.

However, surprisingly, the study ends up confirming Gordon’s assertion. Tech industry today, by focusing on substituting technology for people in production, is struggling to deliver substantial enough push for growth acceleration. The promise of new technologies that can move companies toward more human capital-intensive modes of production remains the stuff of the future. Meanwhile, marginal returns on investment in today’s technology may be non-negligible from the point of view of individual enterprises, but they cannot deliver rapid rates of growth in economic value added over time and worldwide.

In my view, the reason for this failure rests with the nature of the modern economy, still anchored to physical capital investment, where technology is designed to replace labor. As I noted in a number of research papers and in my TED presentation a couple of years ago, long-term global growth cycles are sustained by pioneering innovation that moves economic production away from previously exhausted factors (e.g. agricultural land, physical trade routes, steam, internal combustion, electricity, and, most recently capital-enhancing tech) toward new factors.

Thus, the next global growth cycle can only arise from switching away from traditional forms of capital accumulation in favor of structurally new source of growth. The only factor remaining to be deployed in the economy is that of human capital.

Like it or not, to deliver the growth momentum necessary for sustaining the quality of life and improvements in social and economic environment expected by the ageing and currently productive generations will require some radical rethinking of the status quo economic development models.

The thrust of these changes will need to focus on attempting to reverse the decline in returns to human capital investment (education, training, creativity, ability to take and manage risks, entrepreneurship, etc) and on generating higher economic value added growth from technological innovation.

The former implies dramatic restructuring of modern systems of taxation and public services to increase incentives and supports for human capital investments and their deployment in the economy.  The latter requires an equally disruptive reform of the traditional institutions of entrepreneurship and enterprise formation and development.

From investor perspective, this means seeking opportunities to take equity positions in companies with more horizontal, less technocratic distributions of management and ownership. Cooperative, mutual, employees-owned larger ventures and firms offer some attractive longer term valuations in this context. Entrepreneurs who are not afraid to allocate wider ranges of managerial and strategic responsibilities to a broader group of their key employees are also interesting investment targets.

Within sectors, companies that offer more flexible platforms for research and development, product innovation, customer engagement and are design and knowledge-rich will likely outperform their more conservative and rigid counterparts over the long run.

The new world of structurally slower growth does not imply lack of opportunities for investors seeking long run returns. It simply requires a new approach to investment allocation across asset classes and individual investment targets. When both, supply and demand sides of the economic growth equation face headwinds, safe harbours of opportunities lie outside the immediate path of disruption, in the areas of tangible real equity closely linked to the potential drivers of future growth.

Posted by TrueEconomics at 10:16 AM