My speaking points on the topic of the Markets Outlook for yesterday's IG conference: 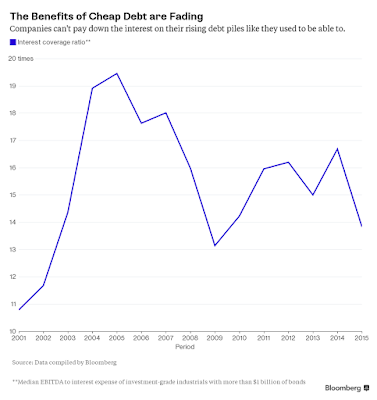 - Global debt cycle has turned – sovereigns are not leveraging as fast or deleveraging, but corporates leveraged up.
- Much of pricing today reflects migration from equity to debt
- In this environment – long only allocations are problematic.

Theme 2: Emerging markets, especially BRICS
- Idea of 3rd Wave – Goldman’s thesis – is based on two drivers: duration of the crisis (‘this can’t be going for so long…’) and firewalls (‘this can’t spill into the developed economies…’) both of which are
- There are no fundamentals to support robust recovery view
- Again, allocations are highly problematic.

So short-term summary is poor when it comes to hard numbers:
- World economic growth for 2015-2017 forecast is down from 14.1% in 2012 to 10.9% today
- Euro area economy forecasts are flat: 5% in 2012 and 4.9% today, holding relatively steady compared to the rest of the world solely because Europe is now Japanified
- Advanced economies down from 8.1% to 6.6% - another miserably Japanese-styled performance compared to past averages
- Emerging and developing economies from 19.55 in 2012 to 14.0%.

On inflationary targets and rates: the only way we are going to get to the inflationary expectations consistent with monetary policy normalization, is by literally superficially jacking up prices through Government controlled sectors and/or via regulatory policies. Which is to say that any inflation above, say 1% or so in the Advanced Economies, today, will be consistent with stripping income out of the economy to prime up financials (in the short run) and public purse.

As much as I love the good story of innovation and technological revolutions, I am afraid to say my fear is that we are heading for the twin secular stagnation scenario:

Supply side stagnation:
- Technological returns (productivity growth and new value added) are tapering out
- Substitutability of labour is rising and with it, risks to economic systems
- Regionalisation of trade and production are gaining ground and markets fragmentation is going to play a disruptive havoc with our traditional market valuations
- So expect more volatility on flatter trend.

Demand side stagnation:
- Demographics
- Savings/investment imbalances,
- Debt overhang – across both advanced economies and, increasingly also, emerging markets, so we have a Myth of Post Financial Crisis Deleveraging (via BAML)

Or a handy chart 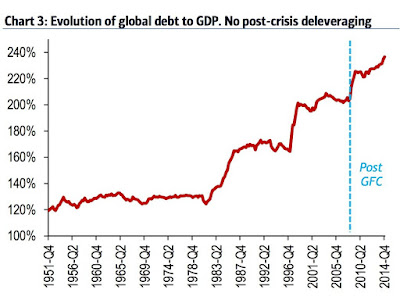 Posted by TrueEconomics at 8:28 AM