7/10/15: On the Illusion of Financial Stability

It is a hefty read, but some key points are the following.

“Th e Federal Reserve is poised to raise interest rates as the preconditions for liftoff are nearly in place. This increase should help slow the further buildup of excesses in financial risk taking.” As if this is something new… albeit any conjecture that the Fed move will somehow take out some of the risks built up over years of aggressive priming of the liquidity pump is a bit, err… absurd. The IMF is saying risk taking will slow down, not abate.

“Partly due to con fidence in the European Central Bank’s (ECB’s) policies, credit conditions are improving and credit demand is picking up. Corporate sectors are showing tentative signs of improvement that could spawn increased investment and economic risk taking, including in the United States and Japan, albeit from low levels.” So, as before, don’t expect a de-risking, expect slower upticks in risks. The bubbles won’t be popping, or even deflating… they will be inflating at a more gradual pace.

All of which should give us that warm sense of comfort.

Meanwhile, “risks continue to rotate toward emerging markets, amid greater market liquidity risks.” In other words, now’s the turn of EMs to start pumping in cash, as the Fed steps aside.

In summary, therefore, that which went on for years will continue going on. The shovel will change, the proverbial brown stuff will remain the same.

Still, at the very least, the IMF is more realistic than the La-La gang of european politicians and investors. Here are some warning signs:

In summary, then, lots done, nothing achieved: we wasted trillions in monetary policy firepower and the system is still prone to exogenous and endogenous shocks.


Note, the IMF doesn’t even mention in this adverse scenario what happens to households up to their necks in debt, e.g. those in Ireland, the Netherlands, Spain, and so on.

So let’s take a look at a handy IMF map plotting their own assessments of the financial systems stability in October 2015 report compared to April 2015 report. Do note that April 2015 report covers the period right before the ECB deployed its famed, fabled and all-so-credible (per IMF) QE. 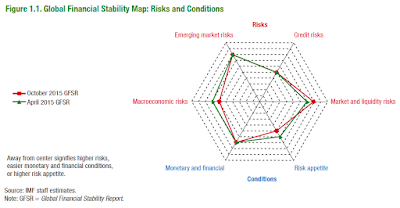 Just take a look at the lot. Market & liquidity risks are up (not down), Risk Appetite is down. Macroeconomic risks improved, but everything else remains the same. That is a picture of no real achievement of any significant variety, regardless of what the IMF tells us. Worse, IMF analysis shows that risk appetite deteriorated across all 3 sub-metrics and as chart below shows, market & liquidity conditions have deteriorated across all 4 sub-metrics. 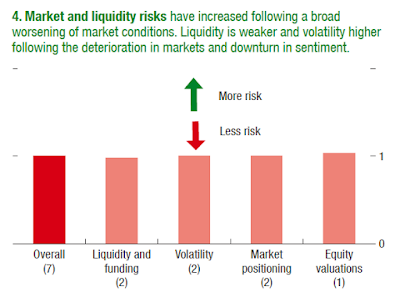 Meanwhile (Chart below), save for household risks, all other credit-related risks worsened too. 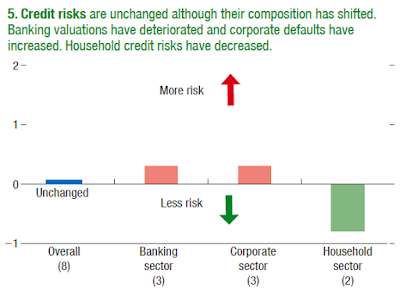 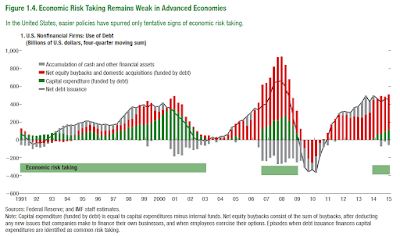 Meanwhile, Government bonds are in a massive bubble territory, especially for the little champions of the Euro: 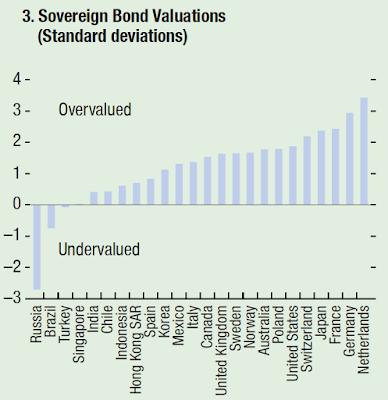 You can see the extent of IMF’s thinking on the topic of just how bad the financial assets bubbles have grown in the following post.

The basic core of the IMF analysis is that although everything was made better, nothing is really much better. In the world of financial stability fetishists, that is like saying we have a steady state of no steady state. In the world of those of us living in the real economy, that is like saying all that cash pumped into the markets over the last seven years and across the globe has been largely wasted.

Posted by TrueEconomics at 3:24 PM