7/10/15: Two Reports, One Ireland, Hundreds of Billions in MNCs' Profits


Two interesting headlines in recent days brought back the memories of recent hot-flash splashes of news regarding Ireland's position as a corporate tax haven. These are:


Have fun tying them together... but here are some choice quotes from the Citizens for tax Justice study referenced in the Reuters article:

"For example, a 2013 Senate investigation of Apple found that the tech giant primarily uses two Irish subsidiaries — which own the rights to some of Apple’s intellectual property — to hold $102 billion in offshore cash. Manipulating tax loopholes in the U.S. and other countries, Apple has structured these subsidiaries so that they are not tax residents of either the U.S. or Ireland, ensuring that they pay no taxes to any government on the lion’s share of the money. One of the subsidiaries has no employees."

"Google uses accounting techniques nicknamed the “double Irish” and the “Dutch sandwich,” according to a Bloomberg investigation. Using two Irish subsidiaries, one of which is headquartered in Bermuda, Google shifts profits through Ireland and the Netherlands to Bermuda, shrinking its tax bill by approximately $2 billion a year" 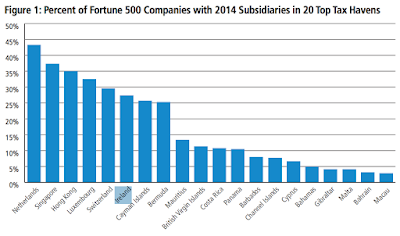 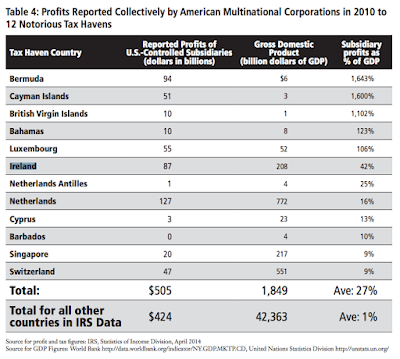 Do note that per above table, Ireland is a conduit for the U.S. corporates' tax activities that amount to 42% of our GDP, while Switzerland (the country we so keenly like to tell the world is a 'real' tax haven) facilitates activities amounting to 'only' 9% of its GDP.

You can read the entire report and see associated data here: http://ctj.org/pdf/offshoreshell2015.pdf

And while you are at it, here is a little Bloomberg piece from back 2014 on another whirlwind of activities: corporate inversions. http://www.bloomberg.com/news/articles/2014-05-04/u-s-firms-with-irish-addresses-criticized-for-the-moves What is notable in this article is that we are now having inversions of inverted companies, whereby new re-domiciling firms buy into previously re-domiciled companies to land themselves a PO Box presence in Ireland.

So back to that OECD reform proposal, therefore, that involves addressing the issue of the Base Erosion and Profit Shifting (BEPS) and is apparently of no threat to us in Ireland... You can try reading all the legalese here http://www.oecd.org/tax/beps-2015-final-reports.htm, or just give it a thought - tax optimisation by U.S. (only U.S.) MNCs via Ireland amounts to up to 42% of our GDP and likely less than 1-2% of the companies workforce is present here. How much of that 42% booked via Ireland is 'base erosion & profit shifting'? Ah, yes... let's not ask questions we don't want answered. Let's just have a breakfast at Tiffany's while repeating that "Ireland has a low rate transparent system and IDA insist on substance for any companies that it supports and I think those are the three pillars that supports our offering and I think Beps is about moving all international systems to a more transparent, clear system."

Posted by TrueEconomics at 5:59 AM