Irish quarterly PMIs for 3Q 2015 posted a marginal improvement in growth conditions compared to 2Q 2015, further strengthening on the already fast pace of economic activity expansion. This overall momentum was driven solely by gains in growth momentum in Services sectors.

Services PMI posted a reading of 62.8 in 3Q 2015, up on already high reading of 61.8 in 2Q 2015. This is the highest reading since 2Q 2006 and marks second consecutive quarter of increases in the index. Overall activity signal from the 3Q PMI averages is for an outright boom in the sector. 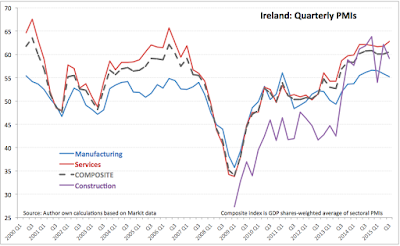 Overall, PMIs continue to signal robust rates of economic activity growth in the Irish economy over the course of 3Q 2015.

Usual caveats, however, apply to interpreting the links between PMIs and actual production and value added in the sectors. Historically Irish Manufacturing and Services PMIs exhibit statistically insignificant correlation with real activity in both sectors, as well as GDP and GNP growth. At the very best, Services PMI data is capable of explaining at most around 11 percent of total variation in GDP, while at the worst, Manufacturing PMI explains at most 5.6 percent of total variation in GNP.

Posted by TrueEconomics at 10:49 AM