18/10/15: Is Ireland a Euro Periphery Outlier? Some Historical Data


How unique is Ireland within the club of euro peripheral countries? Well, historically, rather unique. Alas, sometimes for the reasons not entirely in our favour.

Quote: “Fiscal policy authorities of Greece, Ireland, Portugal and Spain are shown to have, on average, historically followed a "spend-and-tax" model of fiscal adjustment, where government spending is decided by the political process, and the burden of correcting fiscal disequilibria is entirely left to the tax instrument.”

But before then, what were the pre-conditions (thresholds) for taking action? “During the 1960-2013 period for Greece, Ireland and Portugal and during the 1970-2013 period for Spain, we find that the threshold estimate for the budget deficit-to-GDP ratio, which led to different fiscal correction regimes, was on average 4.90% for Greece, 5.10% for Ireland, 3.22% for Portugal and 3.12% for Spain.”

In other words, Ireland had the greatest tolerance - over the entire period - for deficits, opting to wait until average deficit as % of GDP would hit above 5.1%, well above Greece (4.9%) and the rest of the peripheral states.

So now, let’s tackle the more recent period, from the start of the Euro: “When considering the period after 1999, this overall picture worsens for Greece and Portugal and improves for Ireland. Moreover, the results for Ireland and Spain are driven by the financial crisis period. In particular for Ireland, the decoupling dynamics of the government spending reflects the support to the financial sector. In fact, when considering the pre-crisis EMU period between 1999 and 2007, the threshold for fiscal adjustment in Ireland and Spain are estimated to be positive; namely, the regime change took place when the budget balance was in surplus. Conversely, the fiscal deficit-to-GDP thresholds estimated at 5.32% for Greece and 4.08% for Portugal remained rather high.”

The above basically boils down to the following: since 1999, growing economies of Ireland and Spain allowed two countries to substantially reverse pro-cyclicality of deficits and significantly reduce thresholds for budgetary actions. This did not happen in Greece and Portugal. While Ireland gets a pat on the back for pre 2007 period, it is hardly unique in this achievement.

But despite the gains of the 1999-2007, things did not change all that much within the structure of deficits and adjustments. So per ECB paper “Looking at the effects of the economic cycle, we find that fiscal deficit-to-GDP ratio was not reduced in Greece, Ireland and Portugal with the improvement in economic activity. Consequently, during the contractionary times, fiscal corrections became more costly, as tax adjustments became a priority in an attempt to restore fiscal discipline.”

In other words, we were not unique in the way we handled the underlying structure of public spending imbalances, despite having substantially reduced the fiscal action thresholds.

But may be during the peak of the crisis we widened up? Indeed, ECB offers some positive evidence in this direction, but it also argues that the same took place in Spain and Portugal. “The results also suggest that during a financial crisis the fiscal deficit-to-GDP threshold was relaxed in Ireland and Spain, while it was reduced in Portugal. By relaxing the fiscal deficit-to-GDP threshold (in an attempt to stave off deep recessionary pressures) Ireland and Spain relied on business cycle improvements to raise tax revenues. Given the tendency by Portuguese authorities to improve the fiscal imbalances during a financial crisis, these figures make sustainability concerns for Ireland, Portugal and Spain less of an issue compared to Greece, in an historical perspective.”

Which, once more, does not really identify Ireland as a ‘unique’ case amidst the imprudent (but learning) peripherals.

“The results …suggest that during a financial crisis the fiscal deficit-to-GDP threshold was relaxed from 5.10% to 6.99% in Ireland and from 3.12% to 4.00% in Spain, while it was reduced from 3.22% to 1.92% in Portugal.” In other words, Irish Government thresholds actually worsened in the financial crisis, albeit most of that worsening is attributable to the Government decision to rescue Irish banks.

Overall, as table below illustrates, Ireland has managed to perform best during 1999-2007 period in fiscal adjustment thresholds terms, while Spain was the overall best performer in 1999-2013 period and over the entire sample. My handy addition to the chart are red boxes (highlighting worst performers) and green boxes (best performers) when it comes to budgetary adjustment thresholds. 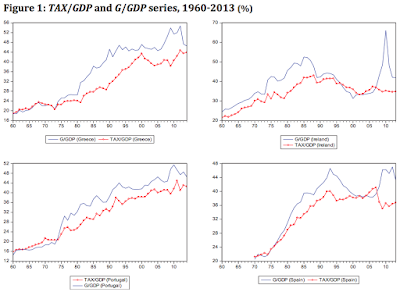 This completes the arguments about Ireland’s alleged uniqueness as an outlier to the group of peripheral states: with exception of the period during which our property and financial sectors bubbles were inflating to unprecedented proportions, Ireland was pretty much a ‘normal’ peripheral state when it comes to fiscal management. Celtic Tiger et al…

So let's hope the latest Budget 2016 does not return us back to the historical record track...

Posted by TrueEconomics at 5:15 PM