Here is an unedited version of my 3Q 2015 contribution to the Manning Financial newsletter covering the topic of  capital investment in the Euro area.

Despite the positive signs of an improving economy, the euro area is hardly out of the woods, yet, when it comes to the post-crisis adjustments. The key point is that the cure prescribed for the ailing common currency area economies by Dr Mario Draghi might less than effective in curing the disease.

One: between 1991 and 2001, Euro area member states were moderate net investors, with annual capital spending exceeding savings by 0.6 percent of GDP on average, close to the World average of 0.8 percent of global GDP. This meant that savings generated within the Euro area were finding opportunities for investment at home, and to attract some net investment from the rest of the world.

Two: over the period of 2002-2014,  annual investment in euro area was, on average, lower than savings by some 1 percentage point of GDP. And, based on the IMF forecasts, this gap is expected to increase to 3.5 percent over 2015-2020 horizon, even as economy officially recovers. This implies that the future euro area recovery will be driven not by investment, but by something else. Per IMF forecasts, this new driver for growth will be external demand for goods and services from the euro area, plus a bounce from the abysmal years of the crisis. In other words, new growth will not be anything to brag about at the G7 and G20 meetings.

Three: as investment demand dropped across the euro area since 2002, global savings excess over investment actually rose, rising from a net deficit of 0.8 percent of GDP prior to 2002, to a net surplus of 0.2 percent over 2002-2014 period and to a forecast surplus of 0.3 percent of GDP for 2015-2020 period. This suggests that returns on private investment are likely to stay low, globally, pushing down net inflows of capital into the euro area. Chart 1 below illustrates. 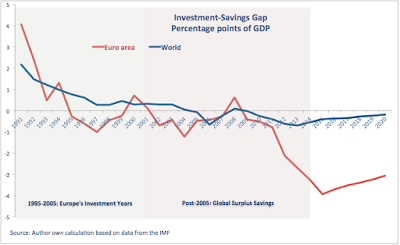 Taken together, the above facts suggest that the euro area does not lack funding for investment, but lacks opportunities for productive capital allocation. Consistent with this, QE-generated funding, is flowing not to higher risk entrepreneurial ventures and capital investment, but into negative returns-generating government bonds. And, in the recent past, liquidity was also rushing into secondary markets for corporate debt, to be used to finance shares buy-backs instead of new technology, R&D or product innovation, or old fashioned building up of productive capital.

As the result we are witnessing a paradoxical situation. Companies’ reported earnings are coming increasingly under scrutiny, with rising investor suspicions that sell-side analysts are employing 'smoke and mirrors' tactics to 'tilt' corporate results to the satisfaction of the boards. Corporate earnings per share metrics are being sustained on an upward trajectory by shares repurchases. All along, bonds markets are running short of liquidity even as ECB is pumping more than EUR60 billion per month into them.

Recent analysis of S&P500 stocks in the U.S. has revealed that the difference between adjusted earnings and unadjusted bottom-line earnings or net income has increased dramatically in recent years. Some 20 percent of all companies surveyed posted adjusted earnings more than 50 percent higher than net income. According to the report complied by the Associated Press and S&P Capital IQ, some companies reporting profit on adjusted earnings basis are actually loss making. European markets data is yet to be analysed, but given the trends, it won't be surprising if euro area leading corporates receive a similar 'tilt'.

All of this reflects cheap debt and leverage finance available courtesy of central banks activism.

Loose monetary policy, however, can provide only a temporary support to the financial assets. It cannot address the deeply structural failures across the real economies.

The key problem is not the short term malfunctioning of the monetary transmission mechanism between ECB record-low interest rates and real investment, but the exhaustion of the structural drivers for growth. Over the 1990s and early 2000s, European economies accumulated debt liabilities to fund growth in domestic demand (public and private investment and consumption). Now, even at extremely low interest rates, the system no longer is able to sustain continued growth in debt. Germany, Italy, the Netherlands and Austria - the net saving economies - are getting grey at an accelerating speed, reducing investors' willingness to allocate their surplus savings to productive, but risky, investments. Their companies, faced with slow growth prospect at home, are investing in new capacity outside the euro area - in Asia Pacific, Central and Eastern Europe, MENA and Africa.

The euro area has been leveraged so much, there is no realistic prospect of demand expansion here over the next decade.

As the result of this, surplus production generated in the saving countries has been flowing out to exports creating a contagion from domestic excess supply to external surpluses on trade accounts. Historically, reinvestment of surpluses converted them into investment abroad. The result was decline in interest rates worldwide. The Global Financial Crisis only partially corrected for this, erasing excess domestic demand and temporarily alleviating asset markets mis-pricing. But it did not correct for debt levels held in the real economy. In fact, current debt levels in the advanced economies are at the levels some 30 percent higher than they were during the pre-crisis period.

Neither did the surplus production and trade imbalances do much for a structural increases in productivity or competitiveness.

Since the start of the crisis, productivity growth declined in the euro area more than in any other developed region or major advanced economy.

The key lesson from the euro area's failed post-crisis adjustment is that debt overhang in the real economy compounds the problem of zero exchange rate flexibility within the common currency area. Flexible exchange rates allow countries to compensate for losses in productivity, competitiveness and for long term external imbalances. Flexible exchange rates also help to deleverage private economies whenever household and corporate debt is issued in domestic currency. In the case of the euro area states, this safety valve is not available.

Creation of the euro has amplified, not reduced, internal imbalances between its member states, while dumping surplus savings into global investment markets and contributing to the declines in the global return to capital and inflating numerous asset bubbles. Surplus supply euro economies, have in effect fuelled housing and financial assets bubbles in the ‘peripheral’ economies of the euro area.

The problem has not gone away since the burst of the bubble. Instead, it has been made bigger by the ECB policies that attempt to address the immediate symptoms of the disease at the expense of dealing with longer term imbalances.

Large scale internal devaluations are still required in all new euro area member states, ex-Cyprus, as well as in Ireland, Italy, Belgium, Finland and Luxembourg. Sizeable devaluations are needed in Austria, France, Netherlands and Slovenia. Of all euro area member states, only Cyprus and Portugal are currently operating at levels of competitiveness relatively compatible with or better than 2002-2003 period average.

The problem with this path is that internal devaluations basically boil down to high unemployment and declines in real wages. In the likes of Ireland, for example, getting us back to 2002-2003 levels of competitiveness would require real wages declining by a further 16.7 percent, while in the case of Greece, maintaining current gains in competitiveness means keeping sky high unemployment unchecked. Political costs of this might be too high for the euro area to stay the course. And ECB policies can’t help much on this front.

An alternative to the status quo of internal devaluations would be equally unpleasant and even less feasible. This would involve perpetual (or at the very least - extremely long term) transfers from Germany, Austria and the Netherlands to the euro area weaker states. It is an unimaginable solution in part because of the scale of such transfers, and in part because the euro area core itself is running out of steam. Germany is now operating in an environment of shrinking labour force and rising army of retirees. The Netherlands and Austria are, potentially, at a risk of rapid growth reversals, as exhibited by Finland that effectively fell into a medium-term stagnation in recent years. Going by the structural indicators, even turning the entire euro area into a bigger version of Germany won’t deliver salvation, as the currency area combines divergent demographics: Berlin’s model of economic development is simply not suitable for countries like Ireland, Spain and France, and unaffordable for Italy.

The third path, open to Europe is to unwind the euro area and switch back to flexible currencies, at least in a number of weaker member states.

Speculations on the future aside, one thing is clear: euro area is not repairing the imbalances that built up over the 1998-2007 period. Even after the economic crisis that resulted in huge dislocations in employment, wages, investment and fiscal adjustments, productivity is not growing and demand is stuck on a flat trajectory.

Support from the ECB via historically unprecedented monetary measures and billions pumped into some economies via supranational lending institutions, such as EFSF, ESM and IMF are not enough to correct for this reality: euro area is new Japan, and as such, it simply lacks real opportunities for a new large scale boom in investment.

Posted by TrueEconomics at 10:58 AM