Quite a wonkishly fascinating chart (I love long time series, even if much of them are imaginary numbers): via http://uk.businessinsider.com/oil-is-cheaper-than-it-was-in-the-1860s-2015-6?r=US we have oil prices from 1860s on, though, sadly, not updated to most current, which is just around 1970s decade average. 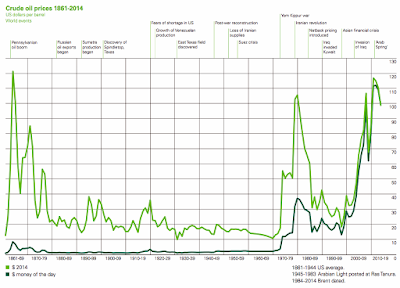 Draw conclusions at your own peril. I chance to say: post 1900 price trend is all steady, until Governments mess up (the 1970s crisis - Governments-led, the 2000s lift-off - also Governments-led). So here you have it... boring commodity that is occasionally over-politicised into a bizarre beast.

Posted by TrueEconomics at 4:40 PM