Couple of interesting items on on Greek crisis:

Bloomberg prints an exercise in extrapolating Greek devaluation to Mexico peso crisis. It is an interesting exercise in so far as it does indicate (imperfectly) one side of the 'pain coin' currently spinning in the air. But it does not provide for any realistic comparatives to the other side of the same coin: the side of Greece not opting out of the euro area. Suppose the estimated path in the Bloomberg chart is correct and Greece, exiting the euro does face a devaluation 'bill' of some 300 percent-odd. As Bloomberg article says, there will be pain. Huge pain. Now, suppose Greece does not opt for direct devaluation. Then what? Then - exactly the same adjustment will have to happen via internal devaluation. Absent inflation (of any significance) in the euro area (and even given the ECB target inflation), this means all of this adjustment will be carried by Greek people. Except, with devaluation and exit, Greece will still retain internal markets for adjustment: with reforms (not guaranteed by any means), and with some pain taken on the side of capital / funding, it might ameliorate the period of post-default devaluation (the 'jump' stage in the chart below). Staying in the euro clearly implies zero adjustment on capital side, with all adjustment on households' side (employment, earnings, pensions etc). In addition, staying with euro implies no imports substitution (no price effects), exiting implies devaluation-driven imports substitution. Finally, staying with the euro implies no exports boost from devalued currency. 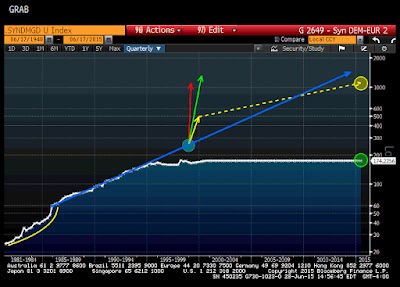 So the Bloomberg exercise is fine and interesting, but one-sided ad extremum.

Which rounds us to the latest news from the ECB. With Greeks requesting EUR6 billion increase in ELA and ECB rejecting it, Reuters reports a comment from a source on the situation:
"Commenting on the expected extension of existing emergency funding, one person said: "It doesn't make sense to stop it now. The banks are not able to pay it back anyway. So if you froze it for another two or three days, it wouldn't make any difference."" Except, of course, it does make perfect sense: if the ECB were to extend ELA, there would not have been capital controls (note: I am not suggesting the ECB should have done so - that's a different matter). However, without ECB support for ELA uplift, we have capital controls. Which sends a clear message from Frankfurt to Greek voters: this is what you will have to live with if you go against us.

And this neatly dovetails with what Jean Claude Juncker said to the Greek voters earlier: "You should say ‘yes’ regardless of what the question is.”


Because whether Reuters wants it or not, in Europe, what the bank does, the banks' kings say.