In response to my comment on Irish exports of goods data through April, one analyst suggested that things are not as bleak, citing expansion of industrial production in Traditional sectors as a sign of real economy improvements (as opposed to accounting economy of our MNCs-led tax optimisation exports).

No doubt, the comment is correct. Things are not so bleak as Traditional sectors shrinking. In fact, they have been growing and with them, there has been some growth in indigenous exports too.

Here is the latest quarterly data on industrial production separating Modern sectors (MNCs-dominated) and Traditional sectors (which also include a large segment of MNCs, for example in food and beverages). 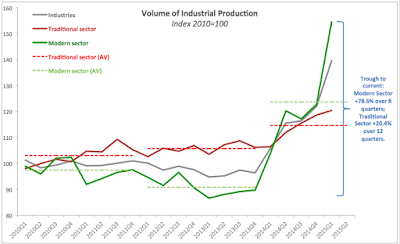 But what about more recent data? I prefer quarterly series for they provide a bit less short run volatility. But as you might ask, here are comparatives:


Let's set aside monthly figures, and focus on less volatile quarterly production to recap: in 1Q 2015: there is some growth in the Traditional sectors, but that growth is vastly below the 'miracle' growth recorded in Modern sectors...

Posted by TrueEconomics at 10:20 PM