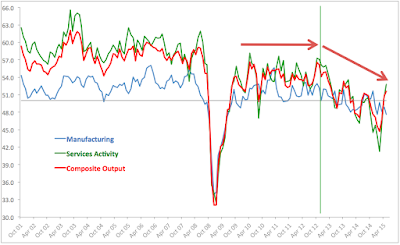 Composite PMI, pushed up by Services sector reading posted another surprising rise to 51.6 in May, signalling rather solid growth momentum, compared to 50.8 in April 2015. 3mo average for the series is at 49.7 against 3mo average through February 2015 at 45.8 and 3mo average through May 2014 at 47.5.

As chart above illustrates, we now have strong growth in Services sectors driving up overall Composite indicator. This is quite surprising, given April real dynamics (see here).

Overall, PMIs indicate a volatile, trend-less movement toward overall economic stabilisation that require two things to confirm a positive trend: 1) improvement in Manufacturing reading over the next 2-3 months and 2) continued above-50 readings in Services over another 2-3 months. In simple terms, it is too early to call a positive trend in the economy, but Services dynamics are encouraging.

Posted by TrueEconomics at 9:57 AM