Key summary of the previous posts covering QNHS for Q3 2014 is provided at the bottoms of the post (they are now getting longer than the posts, so I should probably end this analysis). 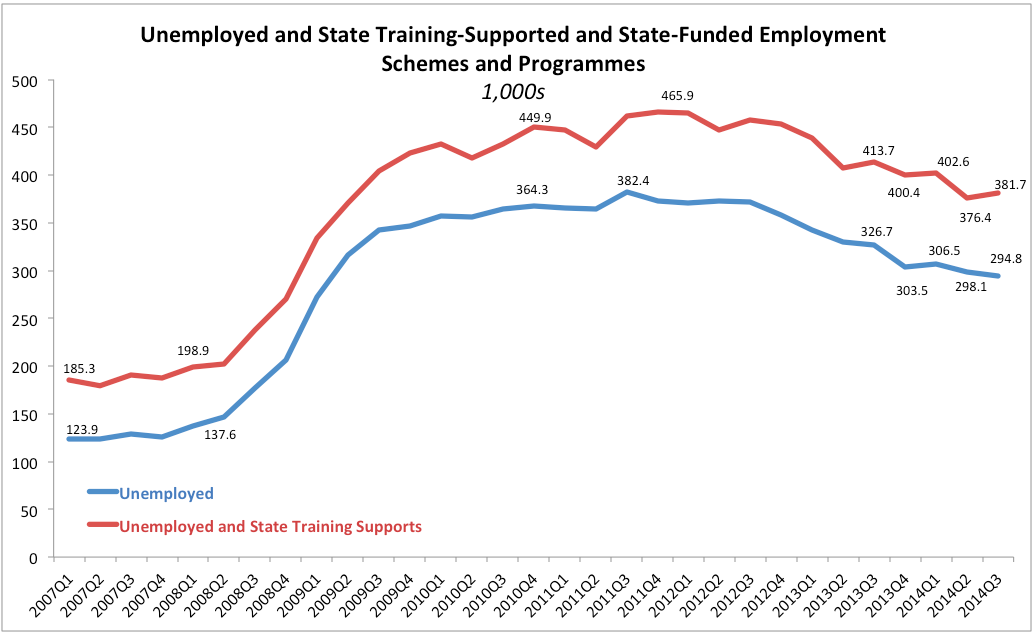 Interestingly, there have also been significant changes in terms of self-employed.

Now, as to the Government's claims of massive jobs creation during the Government tenure, total unemployment (ex state training schemes and programmes) fell 65,640 in Q3 2014 since Q1 2011, but 23,300 of this fall was accounted for by higher numbers in self-employment absent employees. Over 3.5 years, Government stewardship of the economy was, therefore, associated with employment-linked unemployment reduction of roughly 12,100 per annum.

Summary of previous posts:
1) Unemployment is falling across all durations and all demographic (age-defined) cohorts, but the pressure of long-term unemployment is rising in the cohort of older workers (40 years of age and older)
2) Irish economy added 27,600 jobs in a year though Q3 2014 compared to Q3 2013. but only 17,300 of these jobs were private sector non-agricultural jobs. On longer-term trend: Non-agricultural Private Sector employment in Q3 2014 was 13.83 lower than 2008 average and Agricultural employment was 4.9% lower. In contrast, Public and State-controlled Sectors employment in Q3 2014 was 3.56% higher than 2008 average.
3) Ireland's participation rate remains below historical average and despite a slight improvement in Q3 2014 compared to Q2 2014, labour force participation rate remains lower than for the same period in 2013.
4) Total population over 15 years of age increased by 0.08% y/y and population at work was up 1.7% y/y (+31,000), marking a slowdown in the rate of growth from 2.17% y/y in Q2 2014 (+39,100). Since Q1 2011 some 58,500 more people are at work, although this reflects seasonal variations. Numbers of those retired from employment rose to 416,700 - up 2.76% (+11,200) y/y and up 68,400 or +19.64% since Q1 2011. Q3 2014 dependency ratio was 40.34 individuals at work to 59.66 individuals not working for various reasons and remains higher than historical average.
5) Both full-time employment and total employment accelerated in Q3 2014 compared to Q4 2013-Q1 2014 dynamics, with most of the new jobs creation taking place in the category of full-time employment. This is good news. Numbers of underemployed individuals fell. Which is another good news. However, as the proportion of total employment, full-time employment remains at the low levels.
Posted by TrueEconomics at 2:07 PM